Recently I saw an outrageous headline and ignored it because there’s really only so much I can take in this crazy world.

It kept popping up in different places so I finally looked at it with the intention of following the story to its source to see if I could discern the truth about it. Was it all a big hullabaloo over someone being sarcastic, or was he so drowning in White Guilt that he felt the need to express it via Twitter?  In my findings, I think the guy actually was being sarcastic in his outrageous tweet. You see, there is actually an assistant “professor” (in quotes because I really don’t know that I’d call this guy a professor), of humanities at Shimer College.

Here are the tweets that started the whole mess: 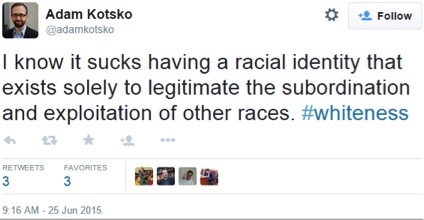 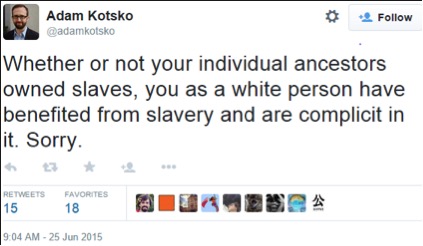 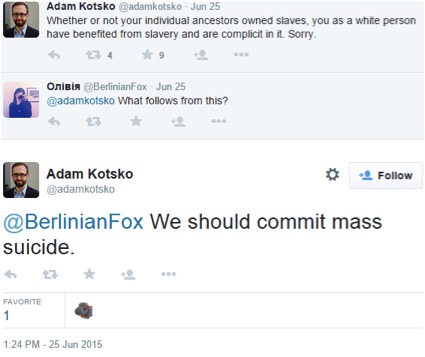 So, yeah, I can see why he could claim in his blog, later, that he was being sarcastic. Because being sarcastic with one tiny portion of your overall bogus claim makes everything better.

If you go to his blog you’ll see that he claims to be a victim of the right-wing toilet bowl of the internet.

Kotsko has since made his Twitter account private. I’m assuming it is so he can offend only his close friends.