In what would undoubtedly serve as the pretext for Net Neutrality, the attack at Benghazi the night of September 11, 2012 was not without footage approximately four minutes from a cell phone. Gunmen are seen running toward the camera and other gunmen. At one point in Arabic, one approaching gunman says, “Don’t Shoot us! We were sent by Morsi!”. And while the video is in Arabic, you can easily discern the word “Morsi”. 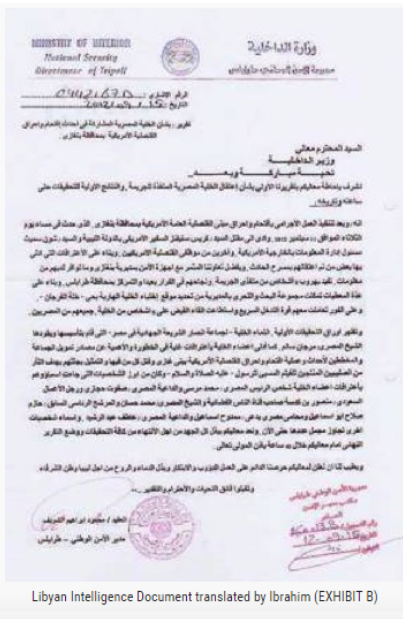 Libyan intelligence allegedly revealed confessions of six members of an Egyptian Ansar al-Sharia cell arrested and found to be involved at Benghazi, available as a .PDF document. It clearly implicates the Morsi regime in Egypt, Al-Nas TV and Dar Al-Hekma. 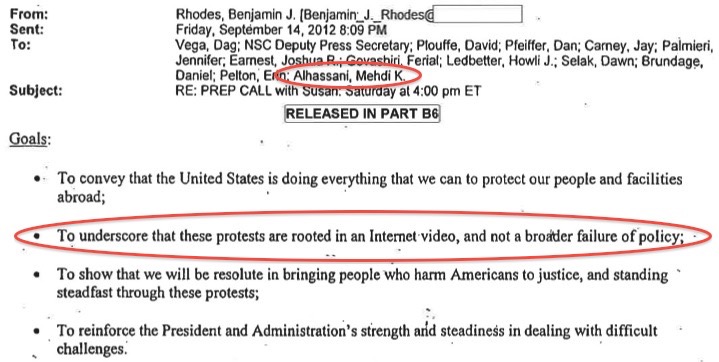 The same day (September 11, 2012), a riot adjacent to the one in Cairo transpired, also blamed on a video slandering Muslim prophet Muhammad by State Dept. spokeswoman Victoria Nuland.

The timetable leading to the “Friday of Rage” is below.

Thursday, September 6th: According to the Wall Street Journal, this was the day that the 14-minute Innocence of Muslims video trailer was sent to “journalists around the world”. Some of the video was translated into Arabic.

Friday, September 7th: Egypt’s Wisam Abdul Waris of Dar Al-Hekma (yes, the same Dar Al-Hekma identified in the Libyan Intelligence document) publicly denounces Innocence of Muslims. He does so while calling for the criminalization of any defamation of Islam, even in non-Muslim countries.

Saturday, September 8th: Al-Nas (yes, the same Al-Nas identified in the Libyan Intelligence document) talk show host Khalid Abdallah, who is sympathetic to the more fundamentalist, Salafi Muslims, interviewed a Muslim activist named Mohammad Hamdy and aired translated portions of the Innocence of Muslims video that for weeks, Obama administration officials attempted to blame for the Benghazi attacks. Reuters reported days later that the airing of these clips from the video was “the flashpoint” for the protests in Cairo and attacks in Benghazi.

Sunday, September 9th: An interview with Wisam Abdul Waris is uploaded to YouTube, translated below:

“We have moved to review with Mr. Rifai all the legal procedures today by which we created The Voice of Wisdom Coalition (I’itilaf Sawt al-Hekma); it will hold accountable everyone who insults Islam locally and internationally, in accordance with every country’s laws. We all know the problems Yasser Al-Habib had in London and after that in Berlin… in Germany, an extremist group was allowed to publicize cartoons that insult the prophet in front of the Salafist Mosque in Berlin, through a legal decision. So what we did was to ask Sharabi Mahmoud to reject this legal decision on behalf of the Egyptian people who are Muslim; for this reason, we created this coalition. We also made an official request from the Church in Egypt to issue a public announcement, to state it has nothing to do with this deed.”

The YouTube account where the video originated was owned by one “Sam Bacile”. Later, Bacile is revealed to be Nakoula Basseley Nakoula, the man behind the video. At one time, two videos reportedly appeared on the Feed tab of Bacile’s channel. Sometime between September 9th – 11th, the administrator is believed to have commented on the Waris video.

A week later, Bacile reportedly identified the other video on his channel as one of his favorites, allegedly depicting Nader Bakker, the official spokesman of the radical salafist Al-Nour Party. Both reportedly collaborated in its production according to Waris September 7, 2012.

Monday, September 10th: One day prior to the anniversary of the 9/11/01 attacks, U.S. Ambassador Christopher Stevens – the highest ranking State Department official in Libya – arrives in Benghazi from Tripoli and is due to return to Tripoli on the 14th. Despite warnings and previous attacks, the U.S. Special Mission Compound (SMC) in Benghazi was woefully insecure and not equipped to protect Stevens. The State Department didn’t just drop Stevens inside a compound that wasn’t sufficiently secured. It hired the February 17th Martyrs Brigade to provide security. The F17MB has allegiances to both Al-Qaeda and one of the groups identified in that Libyan Intelligence document mentioned earlier.

Newsmax cited several entries on the militia’s Facebook page openly profess sympathy for Ansar al-Sharia, the hardline Islamist extremist group widely blamed for the deadly attack on the mission. The State Department did not respond to a Newsmax request for an explanation why the February 17th Martyrs Brigade was hired to protect the mission. An Interim Progress Report reportedly released by the House Oversight Committee stated the following about F17MB.

Numerous reports have indicated that the Brigade had extremist connections, and it had been implicated in the kidnapping of American citizens as well as in the threats against U.S. military assets.

The terror group Ansar al-Sharia was that salifist group according to Egypt’s Al Mogaz News. The buildup continues September 10 prior to the attacks, when the real fireworks begin.

Tuesday, September 11th: The itinerary for Ambassador Stevens says that he is to meet with F7MB at 11:00am but next to this are the handwritten words, “Another day”.

The itinerary is believed to have been drafted September 8th, which is also the same day F7MB made known it would be decommitting.

…on September 8, 2012, just days before Ambassador Stevens arrived in Benghazi, the February 17 Martyrs Brigade told State Department officials that the group would no longer support U.S. movements in the city, including the Ambassador’s visit.

That the attack was planned and executed by Egyptians would corroborate Libyan President Mohamed Yousef el-Magariaf statement to former CBS News’ anchor Bob Schieffer on Face the Nation Sunday, September 16:

MOHAMED YOUSEF EL-MAGARIAF: It was planned– definitely, it was planned by foreigners, by people who– who entered the country a few months ago, and they were planning this criminal act since their– since their arrival.

Relative to Morsi’s involvement, El-Magariaf provided only circumstantial evidence by identifying attackers as being “foreigners”. However, the Libyan president’s claims were in fact verified by intelligence and the real-time video, some four minutes long, reportedly a recording of the attack at the Benghazi embassy.

On September 16, U.N. Amb. Susan Rice appeared on five Sunday talk shows asserting the attack was the result of a spontaneous demonstration in response to a video. Her egregious lie from ABC This Week is below, going as far as directly defending Morsi.

“I spoke to the Libyan Ambassador… When he said his government suspected that former Gadhafi regime elements carried out the attacks, I told him that the group that conducted the attacks – Ansar al-Sharia – is affiliated with Islamic terrorists.”

The next day, Jones is said to have corroborated claims by Libyan intelligence that an Egyptian Ansar al-Sharia cell was involved, which would be consistent with the real-time video of the attack. But four days later, the reality finally obliterated Rice’s statements as it became clear there was almost certainly a cover-up involving Morsi and Ansar al-Sharia.

Morsi and his acquaintance, Al-Qaeda leader Ayman al-Zawahiri, made it clear they demanded Omar Bakr Rahman, mastermind of the 1993 World Trade Center bombing, to be released from prison. Morsi would do the same to CNN’s Wolf Blitzer.

President Obama vocally defended those responsible for the Benghazi attack over the coming weeks, citing the video. But the following E-mail leaked by online hacktivist organization Syrian Electronic Army (SEA) almost certainly proves it was in fact planned by the president himself. Within its contents, Obama appears to have discussed alongside his instructions to Turkish leader Recep Tayyip Erdogan their mutual Muslim faith, to engage in a crackdown on demonstrations which would lead to violence at midnight Friday, September 14, 2012.

‘Dear Tayyip… ‘speak out immediately and forcefully before people go to Friday prayers… I believe that you are one of the most credible voices in the Islamic world today, and that if people hear you calling for calm and condemning violence it will have a real impact… It will be important to emphasize that diplomatic personnel and facilities must be respected and that the way to defend religion is through peace rather than violence. As people of faith, we have an obligation to prevent the people who did this video provoking a cycle of violence that violates the values that undergird our faith… I understand you are traveling between Ukraine and Bosnia and Herzegovina, and it is just after midnight in Washington. I am writing to you because given what has happened in the last two days, there is a very real danger that there could be an escalation of violence on Friday that would be very damaging to our shared interests… ‘Let me be clear that the U.S. government had nothing to do with it. We reject its message, which entirely contradicts my personal views and the values that America stands for.’ Obama then underscored that the U.S. respects Islam and that it is opposed to efforts that offend Muslims by defaming the Prophet Muhammad… [I can] do nothing to block the video… ‘in this age of technology,’… [we are bound] by the commitment to free expression. ‘Nevertheless, our embassies across the Middle East are at risk and we are deeply concerned that after Friday prayers our people and installations in the region could be vulnerable to attack. We must not let extremists use this video as a pretext to attack America, or our other allies and partners,’ Obama wrote.

Below are the three campaign slogans over the past few years belonging President Erdogan and Barack Obama from 2008, and the Al-Nour Party (Egypt’s salafist political party founded in 2011, seen in YouTube image).

During an appearance on Fox News on November 13, Charles Krauthammer was convinced Petraeus was forced to resign for not endorsing the talking points regarding the Benghazi. Gen. Petraeus’ E-mailed reply to Amb. Rice is above.

Bill Whittle: "The Democrats Are the Party of Slavery, Segregation, & the KKK