Islamic terror cells around 2011 initiated the civil war in Syria that now are part of the Islamic State. These revelations alongside images of actual documents from the transactions inferring President Obama and the Clintons intended to decimate Israel, and later Egypt, through genocide. And while American media only focuses on the sack of Benghazi, the Arab Spring’s true troubles began January 25, 2011 in Egypt.

In Cairo, the latest trial of deposed Egyptian leader Mohamed Morsi led to his conviction and death sentence May 16, 2015 alongside 35 co-conspirators on charges of espionage in funneling documents to the Qatari government, which were recovered by Al Jazeera to. This led to a collaboration between the CIA, NATO, Muslim Brotherhood, Hamas and Hezbollah to manufacture “takfiri” terrorist cells by Egyptian media, made available through MEMRI in an interview of Palestinian President Mahmoud Abbas by Egypt’s Akhbar Al-Yawm from November 30, 2014, with Hillary Clinton possibly proving to be a link to the creation of ISIS.

“From the outset, I never believed in the Arab Spring. One day, before the January 25 revolution, I was with then-president Hosni Mubarak, and when the events of January 25 began,[then-]U.S. secretary of state Hillary Clinton phoned me and asked me to phone president Mubarak and persuade him to step down. I asked, What do I have to do with the Egyptian matter?… We are facing chaos, the rise of the MB, or both.

Mursi did not understand the Palestinian problem. His understanding of the subject was like my understanding of Japanese. He wanted to exploit it to actualize the interests of the MB. If you remember the Giora Eiland plan, he wanted to turn the Sinai territories into the Palestinian state, [and Mursi agreed to this plan]. [But] we will not agree to accept an inch of land from Egypt and will not agree that a Palestinian should leave his land…[Moreover,] Mursi wanted to establish a Gaza consulate in Egypt to deepen the internal Palestinian schism… If the current situation continues as it is now, ISIS will also emerge in the West Bank. As for the Gaza Strip – the entire MB is ISIS.”

The Muslim Brotherhood is the parent cell for global Sunni terrorism. It was the pivotal apparatus behind the Obama Doctrine crafted by Mrs. Clinton and by proxy her husband, the former president Bill Clinton (per Walid Shoebat) by first toppling Egypt’s Hosni Mubarak and Libya’s Muammar Gaddafi under the excuse of preventing state-sanctioned genocides and violence. The Arab Spring could never have taken flight had it not been the collaboration between the Muslim Brotherhood and the Clintons, intimate associates since the 1980s through the Abedins.

While in Jamaica on 23 June 2011, Mrs. Clinton weighed in on her position in Libya while she had chosen on the matter of Gaddafi’s fate. The link to the Shoebat report provides the 45 second sound byte.

The Pentagon, disturbed by the flow of controlled intelligence by the State Department, was quoted from a spokesperson by The Washington Times on its unilateral clandestine operation of a diplomatic channel bypassing State Department detection to prevent an unnecessary war. Top Pentagon officials and a senior Democrat in Congress so distrusted Clinton’s 2011 march to war in Libya that they opened their own clandestine line of diplomatic channels with the Gaddafi regime in an effort to halt the escalating crisis, according to secret audio recordings recovered from Tripoli.

“… chronicle U.S. officials’ unfiltered conversations with Col. Moammar Gadhafi’s son and a top Libyan leader… “You should see these internal State Department reports that are produced in the State Department that go out to the Congress. They’re just full of stupid, stupid facts,” stated an American intermediary specifically dispatched by the Joint Chiefs of Staff while conversing with the Gadhafi regime in July 2011, saying the State Department was controlling what intelligence would be reported to U.S. officials.

The Washington Times reported on shipments of weapons from Libya to Syria, referencing leaked classified documents. Former Rep. Dennis Kucinich (D-OH) can be heard in the audio clip.

“Libyan officials were deeply concerned in 2011, as Secretary of State Hillary Rodham Clinton was intent on removing Moammar Gadhafi from power, that weapons were being funneled to NATO-backed rebels with ties to al Qaeda, fearing well-armed insurgents could create a safe haven for terrorists, according to secret intelligence reports obtained by The Washington Times… NATO has given permission to a number of weapons-loaded aircraft to land at Benghazi airport and some Tunisian airports,”… identifying… tanks and surface-to-air missiles.”

Bassam Estwani, with whom Rep. Kucinich was well-acquainted, is closely tied with the Muslim Brotherhood through his organization in Sudan; a key fact to be important much later. He is closely aligned with Mouaz Moustafa, Director of the Syrian Emergency Task Force (SETF) seeking to topple the regime al-Assad in Syria. As Moustafa once served in the Libyan Emergency Task Force (LETF), both men are well-acquainted as well as with Moustafa with Sen. John McCain. Per The Washington Times, McCain was heavily invested in the Clinton imperative for an Islamic caliphate. His role was critical in toppling Gaddafi in 2011 as were the other co-conspirators:

Mrs. Clinton ultimately became the most powerful advocate for using U.S. military force to topple Gaddafi, both in her closed-door meetings with Mr. Obama, who ultimately made the decision, and in public with allies and the news media.”

The Beginning of Sen. John McCain’s Involvement with the Muslim Brotherhood and Al-Qaeda

Sen. McCain was direct and very involved in toppling the Gaddafi regime with respect of weapons importations from Qatar. The report chronicled the following.

“On 15th of March the ship loaded with arm[s] arrived to the seaport of Tobruk. On 4th April 2011 two Qatari aircraft laden with a number of tanks, [ground-attack] missiles and heavy trucks was arranged. On 11th April 2011 a number of boats departed Benghazi for Misrata, the shipment comprised assistance including SAM-7 [anti-aircraft] missiles. On 22nd April 2011, 800 rifles were sent from Benghazi to Misrata….”

The same day an 800-count of rifles were shipped from Benghazi to Misrata, Syria, Sen. McCain was also at Benghazi with Amb. Chris Stevens. While in Libya, Al Jazeera interviewed the senator, who proclaimed the rebel forces (who by proxy were the Muslim Brotherhood and Al-Qaeda) were his heroes in the following clip.

From April 11-14, 2011, Sen. McCain attended the U.S.-Islamic World Forum hosted stateside by both the Qataris and the Brookings Institute. There he expressed his vision that U.S. foreign policy would seize the Arab Spring as the seismic event to spread to Russia and China. Mrs. Clinton also echoed the senator’s sentiment.

Ninety days later, the Benghazi compound was sacked. McCain unwittingly implicated himself by slandering Rep. Bachmann. Amb. Stevens, possibly a co-conspirator and conduit for weapons smuggling, perhaps knew too much. Lebanese Foreign Minister Gebran Bassil tweeted that Mrs. Clinton admitted to creating ISIS (“Daash”) in her autobiography Hard Choices and its English translation (Buzzfeed). One pro-Brotherhood blogger claimed it was a hoax, but many of his details are chronologically inconsistent with the actual events leading to “the bribe” and Obama’s lie that did not support the Muslim Brotherhood, which recently established a political party.

The GOP leadership was most likely complicit, notably Boehner and Mike Rogers of Michigan (who provided the 37-page report by the CIA exonerating itself, Obama and Hillary Clinton while blaming security for the terrorists’ attacks). But Sen. McCain was perhaps physically colluded with Amb. Chris Stevens in 2011 and 2012 in reportedly importing massive shipments of weapons from Qatar and Saudi Arabia to topple the regime of Muammar Gaddafi. Amb. Stevens was perhaps the patsy who knew too much and could never say too little. As a result, he was politically expendable and he was possibly killed as a measure political collateral damage.

Sen. McCain’s condemnation of Rep. Bachmann is immediately below. 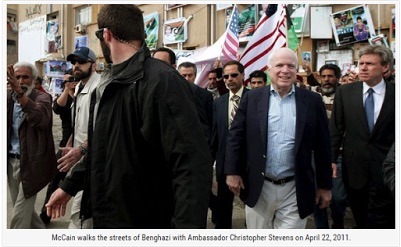 Sen. McCain can be seen in the following photograph with Amb. Stevens (Shoebat, et. al.).

Rep. Michele Bachmann (R-MN) forwarded a letter to the State Department the day Obamacare was declared constitutional by Chief Justice John Roberts. The same day, McCain and Boehner accosted Bachmann for slandering Huma Abedin’s patriotism by inquiring of her connection to the Muslim Brotherhood. 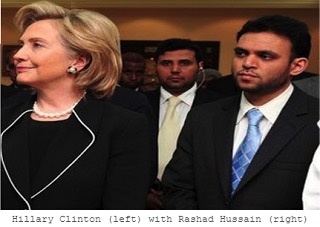 The most prominent Muslim Brotherhood figure to work at the State Department is stealth jihadist Rashad Hussain, formerly the U.S. envoy to the OIC. In February 2015, President Obama appointed Hussain as director of the Center for Strategic Counterterrorism Communications, an office within the U.S. Department of State. (Discover the Networks) More about Hussain is below.

Included among the signatories to State Dept. IG Harold Geisel is Rep. Lynn Westmoreland (R-GA). To each of the five IG’s mailed, a reply was required within 90 days. And because the deadline became engrossed in one of the most scrutinized scandals in U.S. history, there were no consequences due to the GOP establishment’s smear campaign of the five congressmen, included Rep. Westmoreland.

Charles McCullough III, the IG of the Director of National Intelligence (ODNI) that supervises the CIA led respectively by James Clapper and David Petraeus, received an E-mail regarding the perjure by Clapper, who asserted the Muslim Brotherhood is “largely secular” and “has eschewed” violence.

These sorts of activities strike us as deeply problematic with respect to the national interest and security, and are within the scope of your duties under Section 2 of the Inspector General Act of 1978, as amended, “to conduct and supervise audits and investigations relating to the programs and operations of the [Office of the Director of National Intelligence] and… to provide a means for keeping the head of the establishment and the Congress fully and currently informed about problems and deficiences [sic] relating to the administration of such programs and operations and the necessity for and progress of corrective action.”

Revealed by Rep. Westmoreland were meetings within the Organization of Islamic Cooperation of an initiative akin to the video’s purpose.

“… are now known as “the Istanbul Process” and are aimed at finding ways to accommodate the OIC’s demands for restrictions on freedom of expression guaranteed by the U.S. Constitution, so as to preclude “blasphemy” against Islam and its adherents.”

Like Geisel, McCullough never responded despite being knowingly committing perjury in 2011.

EPIC Rep. Gohmert: "The Democrats Should Change Their Name" (For Supporting Slavery!)