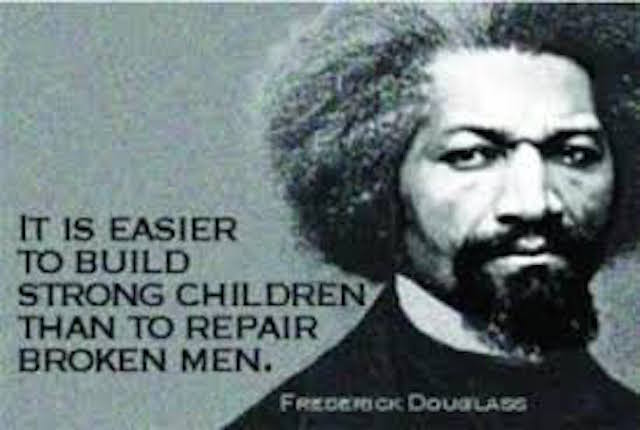 “With all my devotion to the Union and the feeling of loyalty and duty of an American citizen, I have not been able to make up my mind to raise my hand against my relatives, my children, my home. I have therefore resigned my commission in the Army, and save in defense of my native State, with the sincere hope that my poor services may never be needed, I hope I may never be called on to draw my sword…” ~Robert E Lee

“The soul that is within me no man can degrade.” ~Fredrick Douglass

One thing I’ve always tried to do is raise my child to be aware of what’s going on in the world, so he could get a more critical understanding that there is more to life than just our own little worlds. There is a big world out there with all kinds of people, and that a lot of good and bad things go on in it. Not everything has to do with us, but a lot of things that happen can affect the way we live and hopefully teach us how to conduct ourselves.

The downside to this is that our kids often see behavior which is antithetical to everything we try to teach them. In the age of social media as well, our kids who are “on” the same websites we frequent, they are more likely to see our behavior or others’ behavior towards us.

As I tried to think of a way to start this article earlier, my son sent me a Facebook message with a photo and asked me, “Mom, why is this lady wiping herself with an American flag?”

It was a completely offensive photo I had seen earlier on a news site. I have friends, who have fought, some still who fight, for our country. I think of the hundreds of thousands of precious lives given for the defense of this country and others’ freedoms and everything the American Flag represents and it breaks my heart to see someone do such a thing.

How could I explain the “Why” when I can’t understand why someone would do such a thing? I can’t comprehend why people born and raised in the United States of America who hate it so much, who trash everything about this country, who degrade the things which has made this the best country on the face of the planet- for what; for the freedom to act like a jackass for the entire world to see?

When people have such disrespect for this country and all of those who have sacrificed for it, there is no excuse, but one thing separates me from many others I’ve been seeing and hearing from over the past few months when it comes to being offended. I still believe the person who did it, no matter that it’s completely offensive, has the freedom to act like an ignorant fool.

Somehow, present day United States is not the same nation I emigrated to twenty years ago. In that America, one was able to speak their minds, believe what they believed and while others might not agree, the general consensus was to agree to disagree and move on. The United States I came to was a nation of thick skinned people who cared about others and their opinions, while holding true to their own, even if it was opposite. People who knew America is not perfect but were fiercely proud of their country. It was a melting pot, where people appreciated each other’s culture while at the same time integrating and embracing the unique greatness of America, where everyone was free to worship or not, free to think and speak and free to dream the American Dream.

Over the past decade or so, it’s become fashionable to trash your country on foreign soil, associate with dictators, bow down to world opinion and a panel of elites who believe America deserves the blame for everything wrong in the world.

154 years ago, America went to war- against America. Both sides lost and both sides gained following the war where brothers fought against brother, fathers against sons, friends against friends. For those living right on the battle lines between north and south, the decisions made, to have to choose which side to fight for had to be heart rendering.

I opened this piece with a quote from Robert E Lee who fought for the Confederate Army. He was against slavery, but he chose to defend his home- his family. There has been a push in Florida, to remove General Lee’s portrait from the County Commissioner’s offices which has been there for decades.   Lee County, Florida is not the only county in the US named after the Civil War General, and if his portrait comes down, what next? Change every county in the States which bears his name? Take his name off Washington and Lee University in Virginia?

The controversy over the Confederate Flag, which was actually the battle flag used during the war, is not what divided the country in the past, and it’s not what is dividing the country now. Removing all vestiges of the Confederate side of the Civil War will not stop racism from happening and it won’t stop people from doing hateful things.

Some see the flag as purely a racist symbol, while others see it as a historical fact, a part of history- whether one was southern or not, and for many people who have flown it in recent times race has nothing to do with it. While I can understand how people are offended from it, knowing that Slavery was a serious issue in our nation’s history, I can also understand others who focus more on the heritage of their families who fought under the flag. Again, not all who fought for the South were slave owners, and certainly not all were supportive of slavery, nor are those who fly it in our times.

Every last thing connected to the Civil War is suddenly under attack- from the flag itself to those of us who defend others’ rights to display or fly it.

I was a little kid in Canada when I watched the Dukes of Hazard. A lot of my friends watched it as well. There was nothing racist about that show, but because those who have followed the narrative have taken re runs of the show off the air and discontinued selling merchandise with the car or flag on it.

Now we’re actually seeing attempts to dig up the remains of Civil War participants and remove statues which have stood for over a century. Why now, and where will it end? How far does one have to go back before everything offensive in our world’s history will be removed? Or is it only US History that needs to be erased?

Remember when many of us lost “friends” because all of a sudden we were racist because we didn’t support Obama when he was first elected? Even people we’d known for years. It didn’t seem to matter that it was Obama’s progressive background, anti-American sentiment and mentoring under known Marxists, not his skin shade which guided our opinions.

Now, many of us have been labeled again, because the narrative has been passed that if one tolerates the Confederate flag, one is racist. We’re told that we should promote love instead of hate- all while not listening to our point of view, and shutting down any and all communications. How tolerant is that?

I also started this piece with a quote from Fredrick Douglass, who was a leader in the Abolitionist movement. People have always found any reason to hate. Whether they use the Confederate flag to promote racism or whether they use the flag to widen the divide in order to further promote the narrative that racism is still a huge issue in this country. People can degrade me or others by calling us names, but they can’t degrade our souls. They call us hateful bigots for believing people have the freedom to fly this flag even if it’s offensive to others, just as someone has the right to disrespect and demean the American flag.