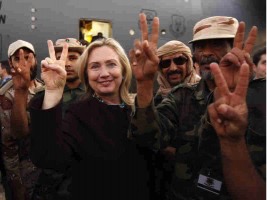 The Obama-Clinton Initiative for an Islamic Caliphate, Part Three

Eman Nabih, Egyptian operator of a site comparable to WikiLeaks, revealed details from November 8, 2013 of President Obama’s role with Mohamed Morsi and the Muslim Brotherhood in Egypt.

Mohamed Morsi will be trialed for Ten serious Treason charges and crimes committed during his reign.

After 30th of June 2013 Revolution and Mohamed Morsi was ousted, The Egyptian Military discovered recordings and Original Documents signed by former Muslim Brotherhood President Mohammed Morsi and his second in command Khairat Al-Shater, linking Obama and his administration to illegal activities with Muslim Brotherhood and Egyptian ousted President.

In an interview with the Anatolia News Agency, Saad Al-Shater, the son of a Muslim Brotherhood leader, the detained Khairat Al-Shater, said that his father had in his hand documents and recordings evidence that will land the head of United States of America, President Obama. The following video reveals further details.

Mohamed Morsi allowed and permitted foreign Terrorists bases existence in Sinai Egyptian territory, and effecting terror acts on Egyptian lands, ousted President was ordering the opening of borders between Egypt and Gaza for The Abdication of the Egyptian sovereignty on Halayeb and Shalateen, Egyptian Land on the border with Sudan. Three official Sudanese confirmed publicly that Ousted President Morsi promised Al-Bashir President of Sudan during their meeting  held on April 2013, that Egypt is going to waive Halayeb and Shalateen to Sudan in order to end up the crisis with Sudan… published Egypt Map without Halayeb and Shalateen and removed Both Halayab & Shalateen from Geography School Books.

… Mursi’s wife is the main political operative… She confessed that her relationship with her husband, other Muslim Brotherhood leaders, and the U.S. administration was one of business[…], that she is involved – her and her husband – with the CIA. Secretary of State Hillary Clinton and others reportedly carried on these relationships… A key revelation… is Mahmoud’s claim that the Clintons befriended her family in the 1980′s while living in the U.S. As one of 63 leaders in the Muslim Sisterhood, Mahmoud is a colleague of Saleha Abedin… the mother of Huma Abedin, who is a close adviser to Hillary Clinton and wife of former Democratic Congressman, Anthony Weiner. Huma first landed a job with Hillary in 1996 after attending George Washington University and having served on the Board of her University’s Muslim Students Association (MSA), a Muslim Brotherhood group….

James and Joan Moryalti Western Investigators In Libya: The Libyan Security provided documents to Washington which revealed involvement of Morsi Former President of Egypt and Brotherhood Organization for the assassination of Chris Stevens US Ambassador in Libya on 11/9/2012.

Barack Obama financed Brotherhood terrorist activities in Egypt… the Muslim Brotherhood Organization practiced crimes in Libya and Egypt and these crimes were financed by Obama’s Administration. Mohamed Morsi, Former President of Egypt, is involved in planning the assassination of the US Ambassador… Al-Qaeda Organization and their Branches like Ansar Al-Sharia Group, literally own Libya… There are hundreds of these Rockets which were stolen from US compounds by the Muslim Brotherhood and Al-Qaeda in Libya during the attack on the US Embassy in Benghazi…

… The Presidents of Chad, Nigeria and Algeria warned the NATO and the USA that if these weapons left Libya, they would represent a real threat to the entire world… these weapons are in the hands of Al-Qaeda in Libya now… these Rockets went out from America to Qatar then to Libya and it was the same day of the assassination of Chris Stevens the US Ambassador in Libya… These are the Islamist groups which were hired by the NATO to overthrow Gaddafi… Chris Stevens had an essential role in sending weapons to Extremists in Syria with the help of Abdul Hakim Belhag (The commander of the military wing of the Libyan revolution in Tripoli).

Abdul Hakim Belhadj was awarded by a commendation by Sens. John McCain and Lindsey Graham. Presently, he is the leader of ISIS in Libya. According to Global Research, Belhadj provides training facilities in Derna. 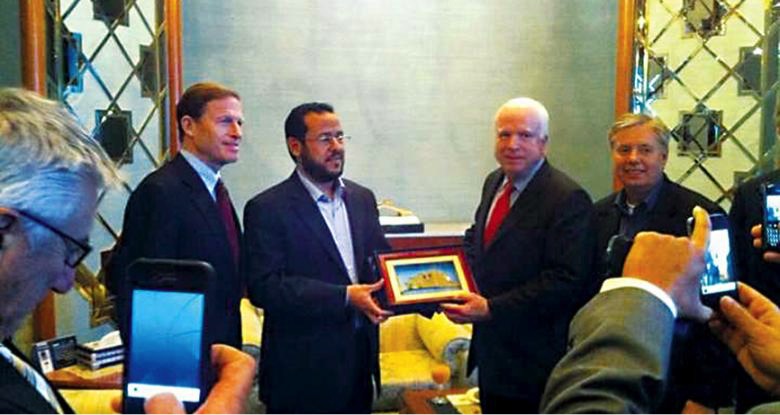 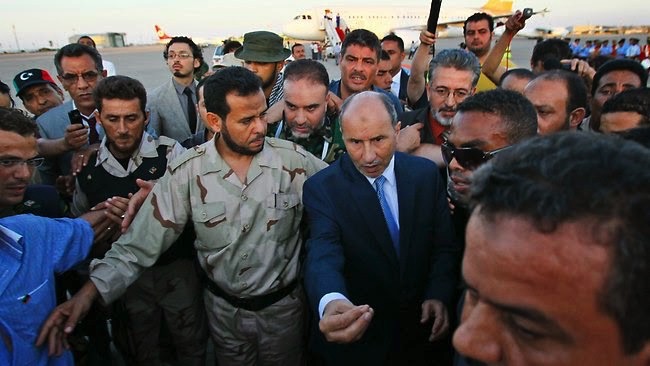 We have learned that one of the reasons the administration is so deeply concerned’ is that ‘there were 400 surface-to-air missiles stolen, and that they are … in the hands of many people, and that the biggest fear in the U.S. intelligence community is that one of these missiles will be used to shoot down an airliner.’

The US was using Benghazi as conduit to covertly ship weapons to Syrian Terrorists… one of the spies in the Libyan Tribes […] for a Libyan Organization… was serving dinner to Chris Stevens and the Personal Representative of the Turkish Prime Minister, the night Chris was assassinated.

On 2 March 2015, Shoebat reported on Mrs. Clinton’s relationship with former chief of staff under Khairat al-Shater, Gehad el-Haddad, who once worked for the Clinton Foundation. 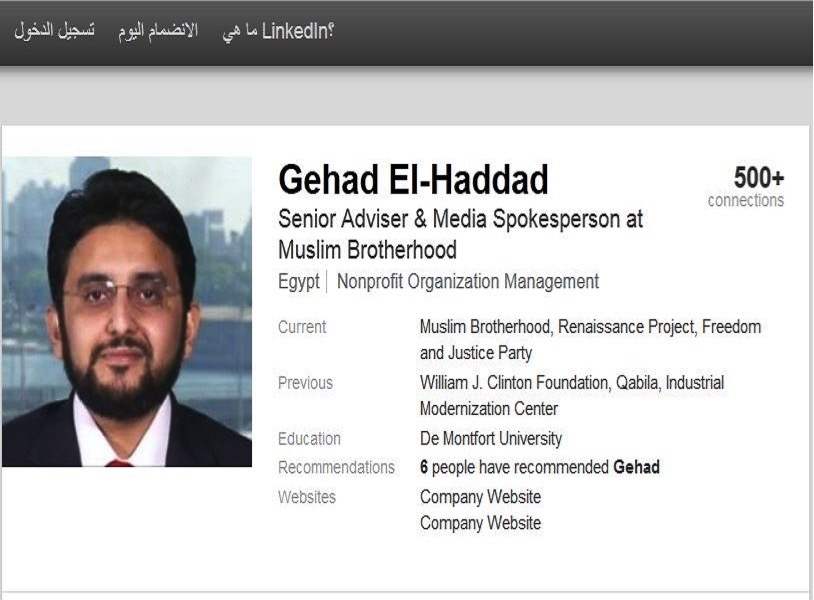 The alleged transaction documents between the William J. Clinton Foundation and Qatar are below, translated.

A judicial source stated that the Attorney General Hisham Barakat received a number of filed complaints over the past few days. These complaints accuse leaders of the Muslim Brotherhood and leaders of the centrist party of receiving bribes thinly disguised as ‘gifts’, paid through the U.S. Embassy in Cairo.” 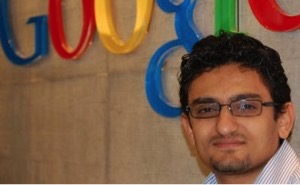 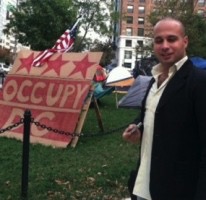 The Creation of ISIS

Ms. Nabih provided details of what likely was the origins of ISIS:

The National Security Report written by Mohamed Mabrouk revealed the plan that was set by Muslim Brotherhood and Hamas and sponsored by the USA. This plan depended on destroying the regional systems in the whole Arab region. The plan also counted on dissolving these regional systems into new systems in order to blur its regional independent character.

The report also revealed that this plan of the New Middle East Map was based on establishing arrangements less compact than the regulatory previous ones and more ambiguous than the political doctrine of the previous systems. The report also pointed that this plan’s target was to make the Muslim Brotherhood Organization as the common denominator inside the new regional arrangements… this plan was targeting also the religious division of Egypt, by targeting the Egyptian Christian Community and their establishments. Also to divide Egypt politically between Islamist and Liberals through imposing false Islamist Sharia Law. Mohamed Mabrouk revealed in his report, documents and recordings between the Muslim Brotherhood Organization leaderships, Hamas Organization leaderships and Hizbullah in Lebanon in 2008.

Qutbism is based on offensive jihad against all opposing the rise of a global caliphate. ISIS is a Qutbist cell. The Tahrir Institute for Middle East Policy claims ISIS on the Sinai was a merger of the Popular Resistance Movement, Ansar al-Jihad, Ansar Bayt Al-Maqdis, Mujahideen Shura Council, Ajnad Misr, Jaysh al-Islam, Jund al-Islam; Kitaa’ib al-Furqan, Takfir wal-Hijra and Al-Tawhid wal Jihad, the original name tied to the Islamic State of Iraq’s founder, Ayman Musab al-Zarqawi. The Islamic State of Iraq reportedly called for Egyptians to wage jihad for “[their] people in Gaza and Iraq” in Cairo’s Tahrir Square February 2011.

Lastly, Ms. Nahib asserted “… the link between MB and ISIS is a reality.”

The International Times reported the U.S. trained Syrian rebels in Jordan in February 2012. In March 2013, The Guardian (UK) claimed the U.S., France and Britain deployed intelligence operatives also to Jordan. The Daily Beast reported January 2015 Obama cut off all funds to the Nusra Front, who merged with Al-Baghdadi in April 2013. In February 2015 Pakistan’s ISIS’ leader Yosef al-Salafi claimed Obama pays $600 for new recruits per head.