The Obama-Clinton Initiative for an Islamic Caliphate, Part Four

The charges of espionage against Morsi involved leaking sensitive classified documents and embezzlement according to Daily Egypt News. On December 6, 2014, Morsi’s defense team presented the alleged SCAF phone links. Discussion of the Obama administration’s involvement ensued December 14. Mohamed Al-Damaty, a member of Morsi’s defense team, said many NGOs and political parties cooperate with the U.S. in different ways, denying  the Brotherhood collaborated with the Obama administration. He argued prisons and police stations during the January 25 Revolution were not stormed by members of the Brotherhood, but rather “criminal elements”. He added how prisons nationwide witnessed riots, accompanied by detainees’ families attempting to free their relatives on January 28, 2011, the day Morsi was broken out of prison by Hamas. Daily Egypt News reported March 3, 2015 the Morsi espionage trial was placed under a gag order by the Cairo Criminal Court “to protect public and national security”. The guilty verdict, initially postponed, was issued July 6, 2015, condemning Morsi to death for plotting with Hamas, Hezbollah and militant bedouins against Egypt.

Key leaders within the Muslim Brotherhood allegedly fled Egypt upon Gen. Abdel Fattah el-Sisi’s successful coups d’etat to Qatar, whose ruling Al-Thani royal family reportedly brokered “the bribe” between the William J. Clinton Foundation and the Muslim Brotherhood for the $8 billion land purchase on the Sinai Peninsula. President el-Sisi “forced” the al-Thani monarchy to expel the Brotherhood as part of an agreement with allies Saudi Arabia, the United Arab Emirates (UAB) and Kuwait according to Britain’s The Guardian September 14, 2014, specifying “seven senior Brotherhood figures were ordered at the weekend to leave Doha… They include its acting leader, Mahmoud Hussein, and two other senior colleagues.”

Ground Zero for the Acknowledgment of the Islamic State: Turkey

The official also confirmed reports Turkey released ISIS terrorists from jail “in a sweeping deal with the jihadist organization that saw the release of 49 hostages from the Turkish embassy in Mosul who were being held by ISIS.” While some reports claim Turkey may have released at least 180 ISIS terrorists in the deal, the Egyptian official said the number of ISIS terrorists released was closer to 700.

Vice President Joe Biden attacked Erdogan’s actions, citing “… ISIS had been inadvertently strengthened by actions taken by Turkey… who were supporting the insurgency against Syrian President Bashar al-Assad… [that] Turkey… were supplying weapons to al-Qaida and its offshoots in Syria, including the al-Nusra front.” Biden also claimed “They poured hundreds of millions of dollars and thousands of tons of weapons into anyone who would fight against Assad… except that the people who were being supplied were al-Nusra and al-Qaida and the extremist elements of jihadis coming from other parts of the world….”

WASHINGTON – Amid increasing doubts about Turkey’s loyalty to its NATO allies, the jihadist group ISIS has opened a consulate in the Turkish capital, according to a Middle East expert who monitors jihadist activity in the region.

The consulate in Ankara, apparently open with the tacit permission of the Turkish government, is issuing visas for those who want to join ISIS in its fight against the Syrian and Iraqi governments, the source said…

Turkey has resisted joining the U.S.-led coalition against ISIS, refusing even to allow the U.S. to use its bases to launch attacks on ISIS targets in Syria or Iraq. This week, Turkish warplanes and artillery bombed the camps of Kurdish rebels in the southeast of the country, near its borders with Iraq and Syria… Turkey’s attack was on fighters of the outlawed Kurdish Workers’ Party, or PKK, which historically has sought a portion of Turkey to form the independent country of Kurdistan, along with parts of Syria, Iraq and Iran.

The ISIS consulate is in the Cankaya district of Ankara, operating freely, the Middle East source said, giving the ISIS caliphate the political recognition normally afforded a country.


WND detailed the relationship with Al-Qaeda through “… Bilal Erdogan, son of Turkey’s newly elected Islamic president, Recep Tayyip Erdogan, is working with Yassin al-Qadi, a Saudi businessman, who last year was linked to al-Qaida. He is on the U.S. Treasury Department’s Specially Designated Global Terrorist list.”

Qadi allegedly has denied any link personal link to al-Qaida. In December 2013, reports claim Qadi had entered the country multiple times without the need of a passport or visa. He is said to have been escorted by then-Prime Minister Recep Tayyip Erdogan’s protective detail. The same sources add Qadi now is in the ISIS leadership, that Bilal, with his father’s support, is pushing Turkish business prospects in ISIS-occupied territories of Syria and Iraq. ISIS cash flow reportedly relies on Turkey, despite international requests from 30 nations in Paris to cut off such funding by “whatever means necessary”. 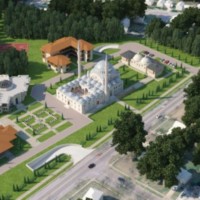 Bilal Erdogan’s other connections include Turkey’s Foundation for Human Rights and Freedoms and Humanitarian Relief, or IHH, an Islamic charity. Currently, President Obama and Erdogan are co-funding a massive $100 million mosque in Maryland.

Turkey’s Anadolu Agency reported “the purpose” for such an extravagantly-expensive venture:

“The presidents of Turkey and the U.S. will open the Turkish-American Culture and Civilization Center in Maryland, Turkey’s foreign minister said Sunday.

Mevlut Cavusoglu, on a three-day visit to Washington, visited the center that also has a middle-sized mosque, and lunched with representatives from the American Muslim community.

“During a phone call, President (Recep Tayyip) Erdogan asked President (Barack) Obama to accompany him in opening the center together and President Obama accepted his offer’in principle,’” Cavusoglu told the representatives.

If Obama’s schedule allows at the time of the opening, he will accompany Erdogan.

The complex is built on a large area and consists of a coffee house, gift shops, cultural center, amphitheater and exhibition hall, computer lab, library, Turkish bath/hamam and guest house.

Cavusoglu said the center has been constructed as a place where all Muslims in the U.S. could come together and worship freely.”

In an egregious act of taqiyya given earlier details, Prime Minister Cavusoglu claimed such an initiative would combat “rising Islamophobia… Our duty is to tell the true Islam which is a religion of peace. Islam does not tolerate terrorism. But unfortunately al-Qaeda and Daesh terror groups have tarnished the image of Islam.” Daesh, also known as ISIS, is neither Islamic nor is a state, he added.

Erdogan’s designs are reconstructing the old Ottoman Empire caliphate, which collapsed in 1924 following the rise of Mustafa Kemal Atatürk post-World War I. Details of the present president of Turkey’s role in Libya and the Arab Spring infer he was among the key co-conspirators which included the Obama administration and other NATO allies (Turkey joined NATO in 1952). Eman Nabih provided key information of Erdogan’s design for a Turkish-nationalist caliphate:

Stevens told the Turkish Representative that Turkey can use their influence in assisting the US to retrieve these Rockets. But the Turkish Representative told Chris that they are not going to assist the Americans in this regard. James said that he informed the CIA of this piece of information but they didn’t react to it. James said that Erdogan the Prime Minister of Turkey is a Muslim Brotherhood and this is not a secret, everybody knows this. Erdogan thinks that one day in the future he will become a Caliph (Leader of an Islamic state led by a supreme religious). Erdogan is an Islamist Extremist and he has the authority and the power. James also indicated that Al-Qaeda own Libya now and they do not take orders from anyone. Now, Al-Qaeda have money and finances and they are on their way to do whatever they want in the entire world.

Officials in Pakistan’s capital Islamabad arrested and interrogated Yousaf al-Salafi, the leader of ISIS in the region. Al-Salafi claimed the U.S. had been funding him and an imam $600 per head per new recruit.

IHH has a history of helping extremist groups, including the Muslim Brotherhood and its affiliates worldwide. The senior Erdogan recently allowed members of the Brotherhood from Egypt to come to Turkey after having been kicked out of Egypt, where the Muslim Brotherhood president, Mohamed Morsi, was forcibly removed by the Egyptian military… is financed by Qadi. It is an affiliate of the Saudi-based “Union of Good,” which is chaired by Sheik Yusuf al-Qaradawi, an Egyptian scholar who also is chairman of the International Union of Muslim Scholars… The State Department also has listed the Union of Good as a Foreign Terrorist Organization….

Raymond Ibrahim reported in October 2014 Qaradawi revealed Abu Bakr al-Baghdadi as a former Muslim Brotherhood member, describing “he was always ‘inclined to be a leader,’ so after he was released from prison (for his Brotherhood activities), he joined with the Islamic State, eventually rising to be its ‘caliph.’” According to Egyptian Minister of Religious Endowments (Awqaf), Dr. Muhammad Mukhtar Gom‘a, “Qaradawi’s confession confirms that the Brotherhood is the spiritual father to every extremist group. President Obama set free al-Baghdadi from his POW camp in Iraq, described by an incredulous Daily Mail June 2014.

Senators John McCain and Lindsey Graham also awarded a commendation to Abdelhakim Belhadj, the current leader of ISIS in Syria. Gen. Thomas McInerney described the rise of ISIS’ process as beginning with the attack at Benghazi in September 2012 in an interview with Fox News.

In October 2014, Pamela Geller alleged the U.S. is training ISIS in the Ninewa province of Iraq. She provided the following images portraying what she claimed is the camp with militants and likely CIA drill instructors captured from ISIS’ propaganda video that month titled “Blood of Jihad”.