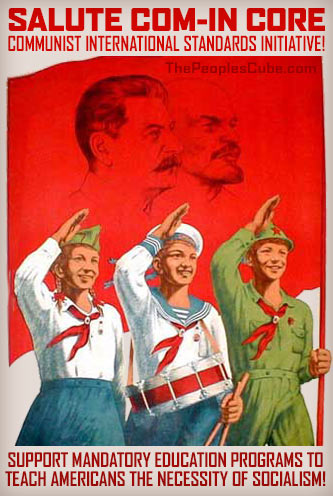 In many ways, Fox has proven they have a bias for big government controlling education in their reporting (or more accurately, non-reporting) of the Common Core.

As the network supporting Jeb! it’s sort of a no-brainer, really. And don’t forget that Rupert Murdoch, head of Fox News corporation, also created Amplify, a company awarded with $12.5 million from the Common Core testing consortia to develop formative Common Core tests to be in a digital library for teachers.

“Common Core was started by governors and state education officials as a way to set standards…” If you start your report off with this sentence, you might be in the bag for Common Core. Funny they use that line to make it sound good when, if you are paying attention, you know that the governors and state education officials have no right to create a program to set standards in the first place.

This statement was made by Fox’s Chris Wallace in his Power Player of the Week segment on his weekly show. He did a totally fair report showing how Common Core is actually being tested to see how well it’s working. It’s being tested by a woman named Laura Slover. But is Laura Slover a third party with no interest in anything but seeing if Common Core is working for our children?

Slover is the CEO of the PARCC testing consortium, or Partnership for Assessing Readiness for College or Career. One of two non-profit testing consortiums for high stakes, standardized testing that go hand in hand with the Common Core.

In other words, without Common Core, the testing consortiums would not exist.

Let’s look at what Ms. Slover has to say.

Well, there’s all the rhetoric we as Common Core opponents have ever heard about the tests coming from a plethora of Common Core supporters.

Fox even goes so far as to showcase some politicians that don’t agree with the Common Core. For example, Bobby Jindal, governor of Louisiana who ushered the Common Core in but has recently “changed his mind.”

Slover said she is having her child take the test because she wants to make sure she is learning, can do math and is at reading level.

I’m assuming that Ms. Slover is smart, in some way, otherwise how would she become the CEO of a big corporation? Wait, wait…Obama is a community organizer who became the leader of the most powerful nation in the world and we know how that’s working out, so never mind!

Point being that Ms. Slover should know that the test’s ability to measure with accuracy the intellectual development of her child is about as the bathroom scales telling me how to lose weight. The measurement tool is only that, telling an interested party a one dimensional answer about a 3 dimensional problem.

Slover goes on to say that for too long in this country we have measured success by how much money their parents make or what area they live in. She’s interested in social justice is what comes to mind, here.

Wallace does throw us a bone in the end by stating whether or not this is heading in the right direction remains to be seen but as anyone with open eyes and discerning attitudes knows, Fox News is in the tank for Common Core.

Watching Fox News and listening to the CEO of PARCC talking about the effectiveness of Common Core is like listening to a door to door vacuum salesmen’s opinion on whether or not your carpet is clean.

As Technology Moves Forward, So Must Our Security