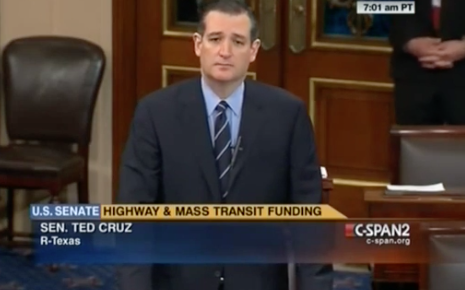 Senator Ted Cruz appeared to be channeling both President Reagan and Andrew Breitbart on the Senate floor Friday.  He strongly called out Senate Majority Leader Mitch McConnell for outright lying to Republicans and accused him of siding with Democrat Majority Leader Harry Reid regarding the export-import amendment.

In perhaps his strongest message yet, Sen. Cruz accused McConnell and Reid of everything from corruption to cronyism.  In turn, Senator Reid rewarded McConnell for his loyalty with this tweet:

I commend @SenateMajLdr for setting up a vote to reauthorize the Export-Import Bank. This bill is critically important for U.S. businesses.

Cruz said McConnell and Reid were taking money from citizens’ paychecks to fund giant corporations.  “It is wrong and it is corrupt.”

“I sat in my office and I told my staff the Majority Leader looked me in the eye and looked 54 Republicans in the eye, I didn’t believe he would tell a flat-out lie. And I voted based on those assurances that he made to each and every one of us.

What we just saw today was an absolute demonstration that not only what he told every Republican Senator but what he told the press over and over again was a simple lie.  This institution should not operate at the beck and call of lobbyists in Washington.  This institution, the majority and Minority leader arm in arm–again–should not team up against the American taxpayers.  It’s why our children are going bankrupt.”

Sen. Cruz then spoke of the “enormous threat” America is facing with the Iran deal:

“A nuclear Iran poses the greatest national security threat to this country and yet the Majority Leader refused to do what he just did for the export-import bank on Iran.  Refused to invoke cloture.  That was an extraordinary step…If he was telling the truth that there was no deal why would he do what he just did?

Cruz then spoke of his amendment to the Iran deal:

“A far more important amendment than brining back this corporate welfare and cronyism is my amendment that provides that sanctions on Iran cannot be lifted unless and until Iran does two things.  Number one, it recognizes Israel’s right to exist as a Jewish state and number two it releases the four American hostages languishing in Iranian prisons.  That is a far more important issue than enriching some more lobbyists on K-Street and getting a few more campaign contributions.  That’s what we should be voting on.”

Sen. Cruz has created a new hashtag on Twitter:  #WashingtonCartel.

See the video at: https://www.conservativereview.com/Commentary/2015/07/Watch-Cruz-Destroy-Mitch-McConnell#sthash.djZA0gTh.dpuf