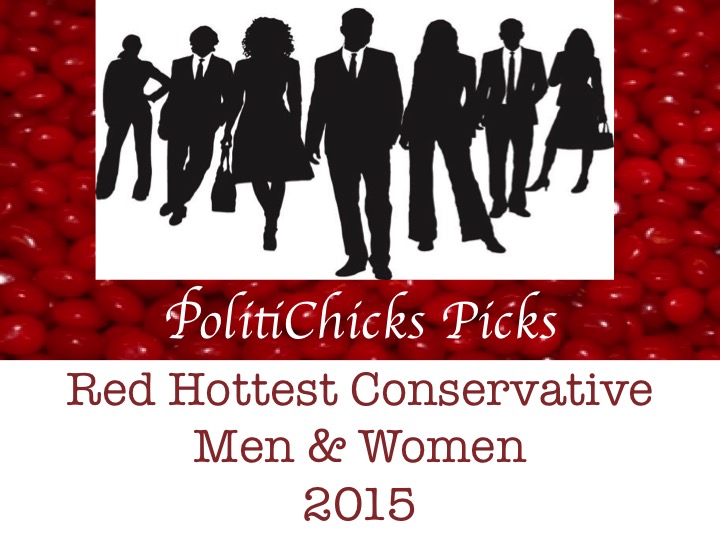 Of course because we’re women of substance, our list requirements are based on–in order of importance:

#1. Intelligence. These men and women are brilliant.

#2. Courage. They aren’t afraid to stand up to challenges, speak the truth and fight for our country

#4: Sense of humor. They never let the haters get them down–they just keep doing what they do, with their sense of self and sense of humor intact.

#5: Looks. This can be either conventionally handsome or beautiful, or perhaps they are men and women who simply exudes sexiness.  In other words, unlike too many on the left, we are able to see past the skin’s surface and don’t judge based on outward appearances only.

1.  Texas Governor Rick Perry.  As governor of Texas, Rick Perry was instrumental in stealing big businesses away from states like California. Because he has been so successful in keeping Texas ahead of the game–and because of his strong stance on keeping our borders safe–he is once again running for president.

2.  Lt. Col. Allen West. LTC West has been fighting for America most of his life. Even before he became a Congressman in Florida, he was working hard to enlighten people about the evils of Islam. Although retired now, we’re all hoping he’ll get back into politics as soon as possible–perhaps as someone’s VP?  Stay tuned…

3.  Gary Sinise.  Whether via his Gary Sinise Foundation or his Lt. Dan Band, actor Gary Sinise works almost 24/7 for veteran’s rights. We’re happy to have Gary on our list this year.

4.  Vince Vaughn.  Also new on our list this year is “newly outed” Libertarian actor Vince Vaughn.  It’s so rare to find actors willing to speak out for right-leaning views, and in many cases it can be a detriment to their careers–so we’re extremely grateful that Vince is on our side.

5.  AlfonZo ‘Zo’ Rachel. Zo has been a major force in the conservative movement, beginning with his ‘brick wall rants’ and later as a star of PJTV.  Lately Zo has been very busy with his band, 20 Lb. Sledge, but he continues spreading our message and enlightening millions.  In addition to being able to break down today’s issues in easy-to-understand, real-life ways, Zo is also one of the world’s nicest all-around guy.

6.  Dan Bongino. Once one of Obama’s former Secret Service men, author and former congressional candidate Dan Bongino stands strong on his principles and beliefs, and has a deep love and respect for his family and his country. And have you seen his amazing jawline?  We can’t wait to see what’s next in Dan Bongino’s career!

7.  Sean Hannity. With his “boy next door” good looks, Fox News host Sean Hannity is the type of guy every girl wanted to date in high school, and/or the brother everyone wishes they had. But just because he’s one of the nice guys doesn’t mean he’s a pushover nor will he ever allow the “PC Police” to rule his show and his panels on Islam have been stellar. In addition to the Sean Hannity Show, he also hosts a radio show and is a best-selling author.

8.  Dan Joseph.  Another newbie on our list, Dan Joseph’s ‘man on the street’ videos for MRC are fast becoming our favorites.  Dan is also a frequent guest on Fox News and Dr. Gina’s show, America Trends.

9.  Rep. Trey Gowdy. Congressman Trey Gowdy has been instrumental in maintaining pressure and public awareness on all-things-Benghazi. While many in the media simply wish Benghazi would go away, Rep. Gowdy continues to make sure it doesn’t.

10.  Molotov Mitchell.  As a video contributor for WND-TV, Molotov lives up to his ultra-cool name in the way he shines a blinding light on the truth.  He ran for Senate last year and we’re hoping he tries again.  Oh–and Molotov also teaches a hand-to-hand fighting system called Krav Maga.  Again, ultra-cool.

11.  Sen. Ted Cruz.  Texas Senator Ted Cruz has been outstanding in his fight for all-things-conservative. He has been consistently strong about Benghazi, immigration, and basically everything all grassroots conservatives are fighting for and he is consistently a favorite in the 2016 presidential race.

13.  Caleb Bonham.  Caleb’s website, CampusReform.org, is doing great things for the Right. Caleb is a millennial who is working hard to enlighten and educate college students across the U.S.  He also creates excellent ‘man on the street’ videos and continues to be an stellar representative for the Right.

14.  Neil Cavuto. Every good Southern woman knows you can catch more bees with honey than you can with vinegar. Neil Cavuto seems to understand this saying in spades because he is one of those rare men who can say something intensely biting and challenging but does so with a smile on his face and a twinkle in his eye that completely throws off his enemy. We are, of course, big fans of this tactic.

15.  Rep. Louie Gohmert. If you want a politician who truly cares about We the People, you’re not going to find one much better than Texas Congressman Louie Gohmert. Rep. Gohmert is as comfortable talking to a room full of deer hunters in an East Texas Dairy Queen as he is giving a speech in Washington. He has stood up to Islam and never backs away from a fight, especially when it comes to defending the values and principles our country was founded on. #BaldIsBeautiful

Editor’s Pick for Hall-of-Fame:  Jon Voight.  Actor John Voight has been fearless in speaking out for all-things-conservative for many years.  Father to actress Angelina Jolie, we’re hoping more Hollywood-types will follow his lead in vocalizing GOP values and principles.  (Yeah, we’re not holding our breath for that one…)

1.  Megyn Kelly.  The new ‘darling of Fox News,’ Megyn is blazing trails all over the place and is even garnering major attention from mainstream types. All we know is we’re VERY glad she is on our side.

2.  Katie Pavlich.  Author, Town Hall columnist, reporter, Fox News contributor and more, Katie has been on top of every news story for years.  We’re all excited to see where young Katie’s amazing career will take her next!

3.  Sarah Palin.  Role model, enlightener, and Mama Grizzly–few people convey their love for America as beautifully as Sarah Palin does.  And with her SarahPAC, she is helping elevate potential conservative GOP candidates to lead us toward a better future.  If you’re not sure how to stand up for your personal principles, just listen to Sarah; few are as fearless and bold as her, and she does so with seemingly effortless style and grace.

4.  Michelle Malkin.  Another fearless warrior princess, author, columnist, and Fox News contributor Michelle Malkin is a bold innovator in the conservative movement.  One of the first to take advantage of a conservative Twitter audience, Michelle Malkin’s site Twitchy is referenced by basically everyone in the media.  And boy would we love to see Malkin leading the 2016 Presidential Debates!  #MakeDCListen

5.  Kimberly Guilfoyle.  Fox News cast member of ‘The Five’ on Fox, Kimberly Guilfoyle could be described as a combination of a brunette Jayne Mansfield mixed with the brains of Supreme Court Justice Antonin Scalia.  Brilliant, intelligent, and wow, such a beautiful woman!

6.  Dana Perino.  Former press secretary, author, and cast member of ‘The Five’ on Fox, Dana Perino is a force to be reckoned with.  She may start out quiet and demure, but once challenged you’d better believe she will stand up for herself, will have her facts straight, and will argue her point beautifully.  And we love her dog, Jasper, too.

7.  Harris Faulkner.  Perhaps one of the most beautiful women on television (and/or perhaps the universe), ‘Outnumbered’ anchor Harris Faulkner is the perfect blend of brains and beauty.  We’re hoping she gets her own show soon.

8.  Elisabeth Hasselbeck.  We adored her on ‘Survivor’.  We cheered for her when she was bullied on ‘The View’.  And when Elisabeth Hasselbeck became a Fox News anchor, we were over the moon.  As an anchor, author, mom, and everything else, Elisabeth is definitely one of the best.

9.  Pamela Geller.  Freedom fighter.  Teller of Truths.  Pamela has dedicated–and risked–her life in reporting the dangers of Islam on her website AtlasShrugs.com.  Sadly, while fighting Islam she also has to fight a media that tends to side with terrorists instead of her, but that will never stop Pamela Geller.

10.  Rep. Michele Bachmann.  One of our first honorary PolitiChicks, Congresswoman Michele Bachmann has been fearless in trying to enlighten Americans about the threat of Islam and the Muslim Brotherhood presence in the Obama White House.  We will miss Rep. Bachmann in D.C. but are anxious to see what’s next for her!

11.  Kelly Carlson.  As an actress (‘Nip/Tuck’), Kelly Carlson could easily have given both Marilyn Monroe and Grace Kelly a run for their money–and best of all, Carlson is the conservative world’s best-kept secret.  Whether speaking out on the dangers of Islam or potential electromagnetic pulse attacks to our grid system, Kelly Carlson is one of the most beautiful, well-informed women in America.

12.  Stacey Dash.  Another stunningly beautiful actress, we were all thrilled when she ‘outed’ herself on Twitter as a conservative.  Now a Fox News contributor, we’re hoping ‘tolerant’ Hollywood will remember how much they supposedly hate Joseph McCarthy and blacklisting…

13.  Lila Rose.  A fearless fighter for the Pro-Life movement, Lila Rose has dedicated her life to protecting those who can’t protect themselves.  Lila is a beautiful woman both inside and out.

14.  Lea Gabrielle.  Former veteran and military expert Lea Gabrielle has literally risked her life for our country and has now dedicated her life to enlightening and educating Americans about the threats we face worldwide.

15.  Ann Coulter.  Author and syndicated columnist Ann Coulter is the Queen of the Zing, able to verbally shooting down leftists with little more than a roll of her eyes.  If humor and wit could kill our enemies, we would be living in utopia by now because of Ann.

Editor’s Pick Hall-of-Fame Hottest:  Raquel Welch.  Yep, she’s on our side.  And having seen Raquel in ‘real life’ close-up, trust us when we say–she is still as otherworldly beautiful today as she was in the 1960’s.  Sigh.

(VIDEO) Which Candidate Best Represents the 1% Elite? Watch & Be Amazed.