Vice reported December 2014 on a commissioned study five years earlier of the Kilgour-Matas report into human organ harvesting in China. The study, launched by David Kilgour (Canadian MP) and David Matas, focused on the wait time for organ transplants. In China, that was concluded to be at three weeks whereas in the United Kingdom, the average was three years.

Involuntary organ harvesting remains illegal in China, yet since 1984 it is permitted with respect to executed criminals. The Kilgour-Matas report alleged organs “were being forcibly procured on demand”, with the Chinese government sanctioning the surgical removal of their living detainees for commercial purposes. Specifically targeted were numerous religious dissidents, most notably among the Falun Gong. The Falun Gong has been targeted since 1999 when then-Chinese President Jiang Zemin launched a campaign to persecute and detain its followers. Coincidentally, “a sudden and timely release” in the sheer volume of human organs became available for international buyers.

In 2014, investigator Ethan Gutmann claimed Beijing continues to sanction forced removals of live human organs from prisoners. In his book Slaughter: Mass Killings, Organ Harvesting and China’s Secret Solution to Its Dissident Problem, new evidence suggests following interview with more than 100 witnesses that include Chinese doctors and police officers, more than 65,000 state-sanctioned killings of prisoners occurred between 2002 and 2008. In Gutmann’s words, the horror was realized:

“Money is just a component in this process, but not the main point; there remain to be many Falun Gong practitioners who refused to be transformed away from their religious beliefs, so in the eyes of the Chinese Communist Party they have found a way to make the intolerable profitable. This is not exploitation; this is political genocide. These people are prisoners of conscience being killed for the value of their organs.”

Planned Parenthood official Norman Fleischmann in a letter to the Napa Valley Register commended Beijing’s “One Child Policy”, stating in calling for the same in the U.S., “China’s ‘one child’ policy… is a start… the world is doomed to strangle among the coils of pitiless exponential growth.” The faith-based Catholic Herald was cited by Live Action News another official having quoted, “[T]he Chinese government has the best interests of its people at heart.” Lucy Lefever, the piece’s author, reported in 2012 the International Planned Parenthood Federation (IPPF) has operated for decades in China. Its Chinese branch, IFPF, was granted full-membership in 1983. The IFPF’s constitution states specifically its mission is to “… assist the government in maintaining a low birthrate.” A fuller detail from its mission statement contains the following:

Based on the need of the masses, CFPA shall endeavor to improve its service and capacity, and organize and advocate the masses to have less children, be well-off, healthy, and civilized.

[Objective] a. To implement the policies, laws, and regulations on national population and family planning, and promote the masses’ awareness on family planning.

In 2005, the U.S. State Department addressed Planned Parenthood’s role in China’s “One Child Policy” geared towards population control. It detailed the following:

In a 2001 testimony before British Parliament (House of Commons), further details explain what CFPA’s mission in China is, and the moral dilemma ignored in favor of profit:

Only a political philosopher could make a distinction between China FPA and the Chinese Government as regards policy…. In a 1993 report, China FPA admitted that it had, ‘participated and supervised that the awarding and punishing policies relating to family planning were properly executed.’ IPPF itself has admitted that China FPA, ‘volunteers sometimes collect the occasional fine when a couple break the birth plan rules’.

And the advocacy group All Girls Allowed explained that “Mandatory abortion, which is often referred to as ‘remedial measures’ (bujiu cuoshi) in government reports, is endorsed explicitly as an official policy instrument in the regulations of 18 of China’s 31 provincial-level jurisdictions.”

In June 2012, widespread international outrage expressed over photographs of a young woman lying next to her dead daughter in the Shangxi province revealed the inhumane nature of Beijing’s “One Child Policy”. The young woman, Feng Jianmei, was brutally forced to abort her child for failing to pay a hefty fine to local family planning (population control) officials according to NBC News:  “She was blindfolded, thrown on a bed, and forced to sign a document that she couldn’t read with the blindfold still on her eyes. Then two shots were injected into her belly. Thirty hours later, on the morning June 4, she gave birth to a dead baby girl.” 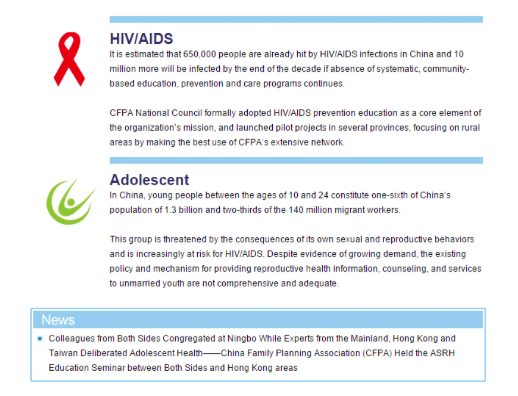 Domestically, Planned Parenthood opposes China’s “One Child Policy”. Yet the second half of IFPF’s homepage (image below), it discloses of a specific demographic is targeted for “its own [inferred “irresponsible”] sexual and reproductive behavior”.

And like with adult followers of Falun Gong, Christians, Uighurs, Tibetans and pro-democracy/human rights activists facing genocide, PFPW targets each demographic for forced abortions. According to gulag survivor Lizhi He, the situation was as horrific as stories from Mao Zedong’s bloody reign where some 72 million Chinese were executed or killed during the targeted famine of the Great Leap Forward in his testimony before Israel’s Knesset in June 2015:

For example, while the outright mass extermination of dissenters has largely gone by the wayside, mass murder remains a hallmark of Beijing rule. The regime continues to slaughter millions of unborn children in forced abortions — part of its savage “one-child policy” — with assistance from the U.S. taxpayer-funded UN Population Fund (UNFPA) and Planned Parenthood, according to congressional testimony by experts. Despite allegedly “easing” the grotesque one-child policy, millions of women and unborn children in China continue being subjected to forced abortions, in addition to mass forced sterilizations and other crimes.

In 2014, state-run China Daily announced “National Health and Family Planning Commission officials said in November [2014] that China currently has no plans to suspend or further relax its One-Child Policy.”

Chinese activist Chen Guangcheng detailed China and Planned Parenthood’s barbarism, stating “In today’s China, under the Communist rule, the government can put their hand into your body, grab your baby out of your womb, and kill your baby in your face.” And in the Shangxi province, obstetrician Zhang Shuxia, was convicted of trafficking seven infants after convincing their parents that the infants were seriously ill or deceased.  She was given a suspended death sentence.  An estimated 70,000 children a year are trafficked in China.  The doctor sell boys at a premium, costing twice as much as girls.

China’s minor modifications do virtually nothing to address the practices under its “One Child Policy”.

Given the revelation of Planned Parenthood’s domestic human organ trade, it not only transpires in Chinese gulags, but almost certainly is extended to adult victims through the contributions of women’s corpses having died during forced abortions. It likely is not by accident as with the prior reference to the UN and Planned Parenthood’s role committing “other crimes” they may both kill intentionally kill pregnant mothers given the gruesome details of the inhumane treatment and methods during procedures.

Daniel Greenfield: (Despite Everything) Why Trump Is Winning