The Russian ruble collapsed to a false sense of redundancy globally in the wake of the West’s series of economic sanctions after Moscow’s invasion of Ukraine. Presently, Mother Russia struggles with rising prices and a severe recession due to its hyper-inflated currency leading to interest rate hikes by the Bank of Russia. Given these coercive measures, there is no question why the Obama administration is desperate to equip Iran with nuclear weapons. Yet the Russians and Chinese can rest assured it will toy with the Obama administration and a spineless NATO portraying Neville Chamberlain as if a war monger. Handing Iran the bomb will not teach them to love America if tomorrow, Ayatollah Khamenei again calls for her death. Such a catastrophic action will set off a chain reaction too incomprehensible to fathom, as all geopolitical events have a common core. 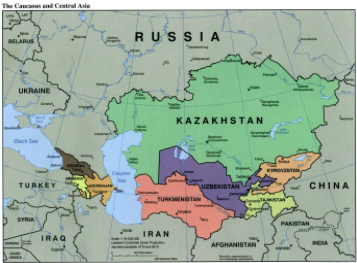 Eerie similarities resonate from the 1970s era of stagflation resulting from the OPEC embargo and the Nixon price freezes after killing the Bretton Woods Gold Standard. When reading how Russia’s largest oil corporation — Gazprom, one of the world’s largest — may well collapse as a result of massive layoffs as the currency is hyperinflated, desperation has reached a point where rather than blinking to the West, Putin will shift towards China’s currency, expanding its fossil fuel industry and capacity east. One year ago, Putin and Chinese President Xi Jinping signed a lucrative $450 billion cooperative trade pact for natural gas pipelines to be constructed and circulate across Central Asia before reaching northern China according to BBC. The purpose behind the Sino-Russo entente is purely Machiavellian, as the West seeks to isolate them geopolitically. 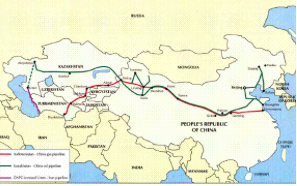 Far more convoluted is why Russia presses its agenda with Iran as the U.S. courts Tehran. Moscow wants oil in exchange for fully constructing Tehran’s nuclear capabilities. For Obama’s purposes, Tehran would serve as the eastern front invading Iraq, which the Ayatollah already ordered airstrikes against ISIS installations. But like each detail mediating against potentially catastrophic warfare and genocide, the United Nations (UN) failed to prevent Moscow from conducting business with Iran’s state oil corporation according to The Jerusalem Post.

(Reuters) – Russia could build a second reactor at Iran’s Bushehr nuclear power plant in exchange for Iranian oil, the Iranian ambassador to Moscow said in remarks published on Monday. Russia could also supply Iran with trucks, railroad tracks, mini-refineries or other goods to pay for the oil, ambassador Mehdi Sanaei told the daily Kommersant, under a deal Reuters revealed was being negotiated last month.

Reuters reported Iran and Russia were negotiating to swap up to 500,000 barrels of oil per day for goods in the deal that would undermine Western efforts to maintain economic pressure on Tehran while global powers seek to curb its nuclear programme.

That the UN achieved precious little mediating nuclear talks should surprise no one. Clearly the Ukrainian conflict inflamed sectarian divide among the former Soviet bloc. Russia now commandeers Kyrgyzstan, a land of natural beauty mired in massive national debt. Putin agreed to pay it off in exchange for military occupation of old U.S. bases from its war in Afghanistan and control over its oil supply.

Where Obama’s “red line foreign policy” shipped out, Moscow sailed into its port. The Soviet invasion of Afghanistan in 1979 is a contemporary lesson how expansion into Central Asia remains a major component of Russian foreign policy dating to Catherine the Great (reigned 1762-96). The matter Moscow owns all of Kyrgyzstan’s debt, energy supply and is now the sole arbiter of its national security should alarm the West that Bishkek was toppled by Putin’s bribe. Once the Afghan war ended for Britain and the U.S., little in the manner of military deterrence stood in Moscow’s way of a possible invasion aside battling the Taliban, now funded by both the Obama administration and again, Pakistan. Islamabad’s powerful Inter State Intelligence (ISI) will surely play kingmaker based on U.S. diplomatic relations with historic arch enemy, India.

The key to Obama’s obsession with Iran — and by proxy, Russia and China — is of course Ukraine, and why he and George Soros fund the war with the Russians. The largest privately-owned oil corporation in Ukraine, Burisma Holdings, Ltd., employs as its Director of the Executive Board Joe Biden’s son, Hunter. But while preserving Burisma Holdings is of chief concern as the front for the U.S. shift into the former Soviet-bloc, the oil pipeline from Russia expands westward into France. Should Russia shut off the supply, the eurozone will crash.

Mr. Biden is also the chairman of the Board of World Food Program USA and Director of the Board of the Center for National Policy, the Truman National Security and the U.S. Global Leadership Coalition. As Mr. Biden serves on the executive council for Center for Strategic and International Studies (CSIS), he was appointed likely at the insistence of the Obama administration as a mole to monitor the flow of oil from Russia to Ukraine.

The present Ukrainian government is on Obama’s payroll. Burisma is headed by Nikolai Zlochevsky, who held senior posts over natural resources, environment and defense in Ukraine. The company aggressively bought out Kiev’s nationalized oil and natural gas leases and companies. The player to receive the token laurel wreath may have been foreshadowed following Ukraine and Russia’s “ceasefire” in September 2014 (BBC).

Russian Prime Minister Dmitry Medvedev pledged Moscow’s intent to economically coerce Ukraine into bending to its will. Ukraine itself is on the brink of default. Two-thirds of its debt is owned by four U.S. banks.

“Nobody in Ukraine has explained to us, or themselves, how these orders will be replaced,” he wrote.

Ukraine remains heavily dependent on Russian natural gas and industries in eastern Ukraine are still tightly intertwined with those in western Russia. Ukraine has had to go cap in hand to Russia recently for electricity supplies, as its power plants lack enough coal.

Medvedev also said a closer eye will be paid to Ukrainian citizens traveling to Russia for work — an ominous suggestion that this economic lifeline could be drastically tightened.

Ukrainian Prime Minister Petro Poroshenko is a puppet for the U.S. against Moscow. The true power in Kiev by reason of their interconnectivity are Biden as the mole for the Obama administration and Zlochevsky. The company serves as Kiev’s tool to “aggressively” reduce Ukraine’s dependence on Russian gas and oil. The paralleling U.S. initiative is to absorb Ukraine’s energy industry as well as that of Europe. 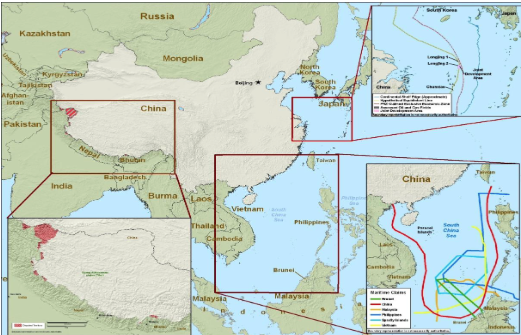 Upon Russia’s invasion of Ukraine, China, its chief geopolitical partner, lent its support. Yet as Beijing publicly acknowledged Putin’s role in the initial proxy war in Ukraine, Xi is at best, timid with respect to supporting internal struggles for a potential regime change. The Center for Strategic International Studies concluded more specific terms as to Beijing’s ironic ambivalence despite Chinese weapons being employed in Syria and Iraq.

China’s stranglehold on America’s massive trade deficit and its territorial expansions across the East and South China Seas to absorb foreign natural gas and oil reserves paint a potentially bleak portrait. Beijing controls 90 percent of the $5 trillion international trade route. Beijing, in fact, is in a deep geopolitical marriage designed to shift against the West. Globally, America’s leadership is perceived too weak to pose effectual opposition to Moscow and Beijing’s stakes in the Middle East. Given the U.S. allegedly funds Neo Nazi militias in Ukraine and played the critical role in the creation of ISIS dating to Hillary Clinton’s role in Egypt and Libya with the Muslim Brotherhood during the Arab Spring, the U.S. finds itself in a very precarious position. 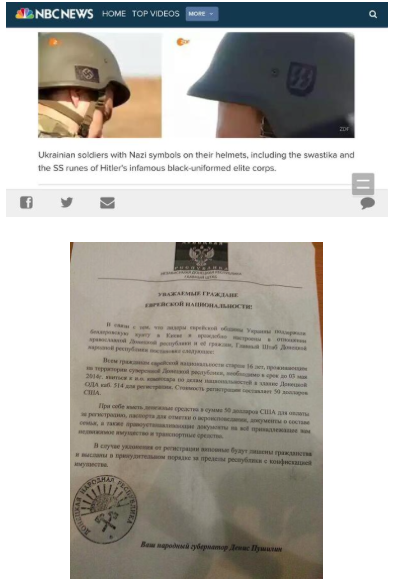 The truth is usually painful, stranger and more prophetic than fiction. Since the ruble collapsed and Gazprom is downsizing, the flow of oil will remain dominated by Russia as it matriculates into Western Europe, finalizing the collapse of the eurozone unless the U.S., now the largest supplier of oil globally, floats the EU. This spark is a historical red flag indicating the conditions ideal for a third catastrophic world war. All that is necessary is an assassination of another Archduke Franz Ferdinand. And now, a renewed Cold War-era conflict over Greece looms as Putin courts Prime Minister Alexis Tsipras, promising access to oil and an alleviation of its near-200 percent debt-to-GDP figure soon to result in Athens’ exit from the EU. But the key shark attempting to devour the cards in the Aegean is China, in which Director of the Quantitative Finance Department of the Chinese Institute of Quantitative and Technical Economics, Fao Mingtao, stated, “I believe there are two ways to give Greece Chinese aid. First, within the framework of the international aid through EU countries. Second, China could aid Greece directly. Especially considering the Silk Road Economic Belt and the Asian Infrastructure Investment Bank. China has this ability.”

And of course, the ruble is actually in far better shape than the dollar. While the Federal Reserve proudly proclaims to own no gold, Russia is presently stockpiling it, as is China.

An alleged declassified document presented by Egyptian President Abdel Fattah el-Sisi late 2013 from Russian intelligence details the role the CIA through the Muslim Brotherhood would play in creating an extreme terrorist cell launching a “chaotic” regional war in the Middle East, with the design to topple the el-Sisi government following his successful coups d’etat of Mohamed Morsi in July 2013. If indeed this dossier is verifiable, Putin is successfully tearing pages from the old Soviet playbook in paraphrasing Sen. John McCain. Meanwhile, Obama has amalgamated the World War II players of Neville Chamberlain and Joseph Stalin into a contemporary position to launch an invasion of Russia from Lithuania and Belarus with hundreds of armored vehicles. Russia countered, deploying hundreds of Soviet era MiG-31 fighter jets. Putin claims Russia recently constructed 40 new intercontinental ballistic missiles (ICBM).

“Red Line” diplomacy never does one good. It is usually a cover for what truly lies beneath, as in setting up Iraq to become the new provincial dummy government under Tehran’s sphere of influence alongside Syria, Lebanon and now Yemen.

Does Freedom of Choice Not Apply to Conservatives?

Daniel Pipes: "The Left is the biggest threat to the United States."