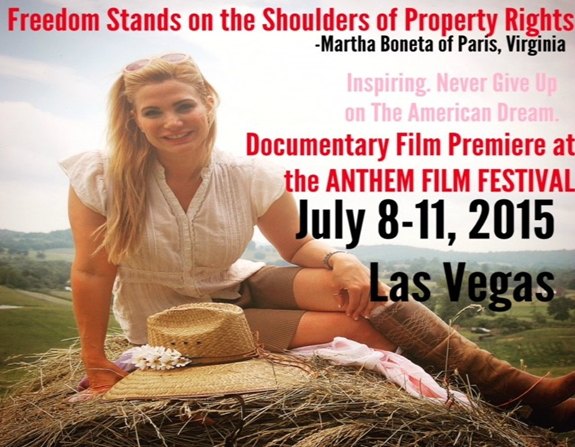 Virginia farmer Martha Boneta is the subject of a riveting 28-minute documentary, “Farming in Fear,” which will premiere at the upcoming Freedom Fest summit in Las Vegas July 11, 2015.  Boneta, who was previously featured in PolitiChicks about her ongoing battle with a non-profit environmental organization was the inspiration behind the Boneta Bill signed into law in 2013, which strengthened Virginia’s Right to Farm Act. The controversy led to enactment of a second bill in 2014, making Virginia the first state in the union to subject environmental groups overseeing conservation easement to public scrutiny, thereby holding them accountable for their actions. Land trusts subject to public scrutiny are private, whereas public land trusts are subject to public scrutiny.

Both laws now serve as a nationwide model for other states to adopt.

Martha Boneta’s dream of becoming a farmer is realized when her family purchases a 64-acre property on the edge of Virginia’s fabled Shenandoah Valley.  But Martha soon enters a Kafkaesque world of phony documents, trumped-up charges, and GESTAPO-style “inspections” of her property.  Her dream becomes a nightmare until she does the one thing her tormentors never counted on:  She fights back.   Over time, the elaborate web of deceit spun by the well-heeled interests coveting her farm is exposed for all to see.

“Facing overwhelming odds in the form of collusion involving a ruthless local government, a rapacious environmental group, powerful real estate interests, and even the IRS, Martha Boneta stood her ground,” says Bonner Cohen, senior fellow at the National Center for Public Policy Research and senior policy analyst with the Committee for a Constructive Tomorrow (CFACT). “The film documents her struggle against corrupt forces intent on driving her off her land.   Her ultimate triumph is inspirational and so is this documentary.”

“I’m grateful that after seeing what had happened to me, the Virginia General Assembly passed legislation providing additional protections to family farmers and local landowners,” Boneta said.