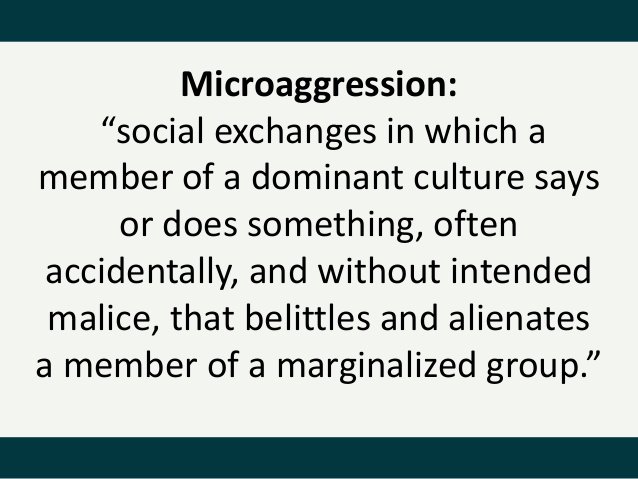 So how do you destroy the First Amendment?

You make human frailty an offense, get academia involved to punish it and to give seminars that further propagate their ignorance. Then the mind-set taught in the seminar trickles down to the college students, who then become voters.

It appears leading the pack of degreed censurers is Janet Napolitano, president of the University of California, Berkeley, former secretary of Homeland Security and former governor of Arizona. Now the Wisconsin University is joining in.

Seminars were adapted from Derald Wing Sue’s book, Microagression in Everyday Life: Race, Gender and Sexual Orientation (Wiley & sons, 2010) specifically for training on micro-aggression (the correct spelling). Napolitano sent out letters to UC deans and department chairs “inviting” their presence at the seminars, “to foster informed conversation about the best way to build and nurture a productive academic climate”. Have you noticed how every inch of America’s constitution is being usurped by attributing the infringement for a “noble reason”?

Just what exactly is a “microaggression?”

According to the Diversity in the Classroom, UCLA Diversity & Faculty Development, 2014, “Micro-aggressions are the everyday verbal, nonverbal, and environmental slights, snubs, or insults, whether intentional or unintentional, that communicates hostile, derogatory, or negative messages to target persons based solely upon their marginalized group membership.”

The “Tools” document adds: “The first step in addressing microaggressions is to recognize when a microaggression has occurred and what message it may be sending.”

According to Wikipedia, the new movement is describing “microaggressions” as ‘the new face of racism,’ saying that the nature of racism has shifted over time from overt expressions of racial hatred and hate crimes, towards expressions of aversive racism, such as microaggressions, that are more subtle, ambiguous and often unintentional. Researchers say this has led some Americans to wrongly believe that racism is no longer a problem for non-white Americans.

So in plain speech, it’s the perceived bias in any communication by the recipient, (or a progressive onlooker) regardless of conscious or unconscious intention (bias) by the speaker. May I add here, there is not a human being alive with an absence of bias. Nor will there ever be someone without bias.

Our brain filters stimuli through our perceptions, which are initially structured by our family of origin, then significant others influence, institution we’ve attended, our exposure to media and our personal learning experiences. We select the stimuli at any given moment to pay attention to according to relevance, deciding what to retain or delete given our values or needs. All processing involves our beliefs, which are basically notions we infers or assume to be true. The brain makes generalization from specific experiences for future judgments. Biases are a normal part of processing. They can be modified to a certain extent, but they are part of our human frailty.

So, to all academics and Marxists, excuse us for not being divine! Perhaps we should be pointing out your biases that are creating division in this nation.

Secondly, have any of these extensively “lettered” faculty ever heard of assertiveness training to manage offenses? Are none of these academics familiar with Suzette Haden Elgin’s, Ph.D. or Deborah Tannen’s, Ph.D. work? Their expertise is in “verbal defense”. Both have taught extensively different skill sets to capture belittling or offensive communication and to respond assertively—not aggressively.

But then such a reasonable solution would support America’s First Amendment, recognizing that the individual should take personal responsibility for offenses rather than academia or the government censuring free speech.

These academics have taken a concept that was originally called micro-inequity and magnified it, moving it out of even the linguistic field, which is interested in what is said, to the subconscious programming of humanity. Who, do these people imagine themselves to be? God? This is academic fascism and it’s out of control!

The pdf handout dispersed during the nine of the ten UC campuses throughout the school year can be downloaded online: “Recognizing Microaggressions and the Messages They Send.” Here are a few examples:

[Theme:] Color Blindness[:] Statements that indicate that a White person does   not want to or need to acknowledge race

“There is only one race, the human race.”

“America is a melting pot.”

[Theme:] Denial of Individual Racism/Sexism/Heterosexism[:] A statement made when bias is denied…. [Microaggression Examples:] … To a person of color: “Are you sure you were being followed in the store? I can’t believe it.” … [Theme:] Myth of Meritocracy [:] Statements which assert that race or gender does not play a role in life successes, for example in issues like faculty demographics.

(Personal Note: Notice the biased labeling of meritocracy as a “myth”.)

[Microaggression Examples:] “I believe the most qualified person should get the job.”

“Of course he’ll get tenure, even though he hasn’t published much — he’s Black!”

“Men and women have equal opportunities for achievement.”

“Gender plays no part in who we hire.”

“America is the land of opportunity.”

“Everyone can succeed in this society, if they work hard enough.”

(The pdf handout is nuanced with meta-messages inferred by the author that if nationally implemented we would not dare talk to one another.)

“If there be time to expose through discussion the falsehood and fallacies, to avert the evil by the processes of education, the remedy to be applied is more speech, not enforced silence.”