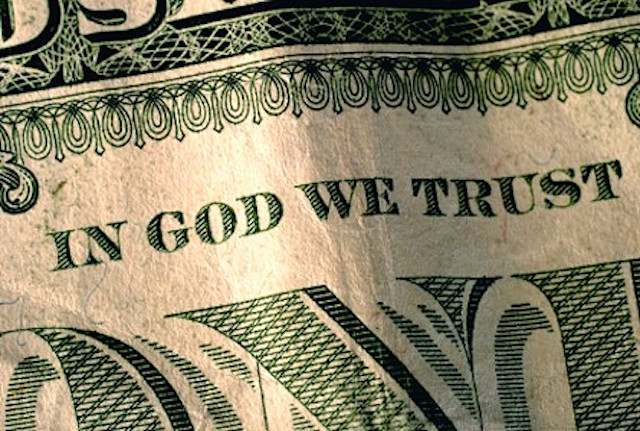 When most Americans hear the words “In God We Trust”, they think of an airy four-word phrase scrawled on our money, something you see when in a moment of boredom you decide to inspect a dollar bill closely enough. It’s easy to forget the significance of this message, and all too many disregard that it has any significance at all. But there are those who haven’t always had such an easy time denying the words’ value.

The first words written on the Mayflower Compact – drafted by the first European settlers who came to this country, before it even was a country – were “In the name of God Amen”. These people understood that they had to trust in God, because they knew they were going to need Him. And they did. They needed Him when they faced plagues brought on by malnutrition, the inability to produce enough food in an alien land, and the demands of taming a continent filled with animals and terrain they had never seen before. But for their faith in God, the people who ultimately gave rise to the United States of America may well not have made it.

When the time came, trusting in God is also what got the first true Americans through the ordeals that challenged them. The Founding Fathers trusted Him to see them through a brutal struggle against distant tyranny, when all they really wanted was to be free – in part, to do nothing more than worship Him as they saw fit. They needed Him just to be allowed to know Him.

The reason “In God We Trust” is on our money, and in many other parts of our society, is because people (without whom we would not be here as Americans) understood the importance of trusting God. God is an integral part of the United States; this country literally would not be here without Him. This is why it is nothing less than an insult to the nation’s roots when people, born and raised in the modern comforts of America, too young to have faced any of the turmoil and anguish that gave it life, call for the suppression of those words. They don’t want it displayed in City Hall, or in other public buildings, or – in some cases – even on our money anymore.

For shame. People who would have us forget where we came from should be answered, their persecution – which is not only anti-religion, but anti-history – resisted and never acceded to. And if it’s considered “politically incorrect” to do so, to stand up for trusting in God, well – George Washington wasn’t very politically correct, either.