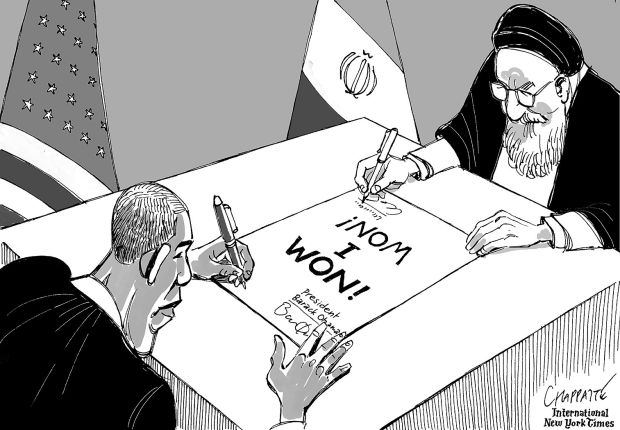 Hearing about the treaty with Iran that Secretary of State John Kerry and President Obama negotiated with Iran, an odd thought occurred to me:  How many treaties are signed with a time limit? This treaty purports to run for ten years, an amount of time that is important in Islamic history.

I was reminded of reading about the Treaty of Hudaibiyah of 628 AD. In that year, Muhammad, along with fourteen hundred companions, decided to perform the Umrah, known as “the lesser pilgrimage”. The Quraysh occupied the city of Mecca and, not wanting Mohammed to enter, closed all access to the city.

After much negotiation, the Quraysh came to an agreement with Mohammed, known as the “Treaty of Hudaibiyah”. This treaty reads (emphasis mine):

“In your name, O Allah. These are the terms of the truce between Muhammad, the son of Abdullah and Suhayl, the son of Amr (of Mecca).

Both parties have agreed to lay down the burden of war for ten years. During this time, each party shall be safe, and neither shall injure the other; no secret damage shall be inflicted, but uprightness and honor shall prevail between them.

The Muslims shall return this year without performing Umrah (the pilgrimage). In the coming year, you may enter it with your companions, staying therein for three days, bearing no arms except the arms of the traveler, with swords remaining in their sheaths.

If a Quraysh person comes to Muhammad (i.e., after accepting Islam) without the permission of his guardian, Muhammad shall return him to them, but if one of the Muhammad’s people come to the Quraysh, he shall not be returned.

The Muslims believed this treaty humiliated them and Muhammad, but when he returned to Medina he proclaimed the treaty a victory.

Although it has been disputed, even the Quran acknowledges Muhammad was the first to violate the treaty. The terms of the treaty specified that any Muslim who flees Mecca for Medina must be returned.  A group of Muslims fled Mecca for Medina a few weeks after the treaty was signed. Muhammad did not return all of them; he kept the women.  Amazingly, a verse from Allah arrived to support his decision.

In his book The Truth about Muhammad Robert Spencer writes,

“The breaking of the treaty… would reinforce the principle that nothing was good except that which is advantageous to Islam, and nothing evil except what hindered Islam. Once the treaty was formally discarded, Islamic jurists enunciated the principle that truces in general could only be concluded on a temporary basis of up to ten years, and that they could only be entered into for the purpose of allowing weakened Muslim forces to gather strength to fight again more effectively.”

We need to ask the question… did Iran agree to this treaty because the crippling sanctions had weakened them and they insisted on a ten year reprieve to regain their strength (while building a nuclear arsenal)?  Or is this another Treaty of Hudaibiyah Iran intends to break as soon as they have regained enough strength to “fight again more effectively”?  Are the Ayatollah and the Mullahs celebrating this treaty as they chant “Death to America” and “Death to Israel?”

One thing is certain:  Congress will not be able to stop the Iran treaty. Our trusted servants have set the clock ticking as we count down towards a nuclear Iran (and we couldn’t even get four hostages released).

The United States as 50 Cultures, Not One