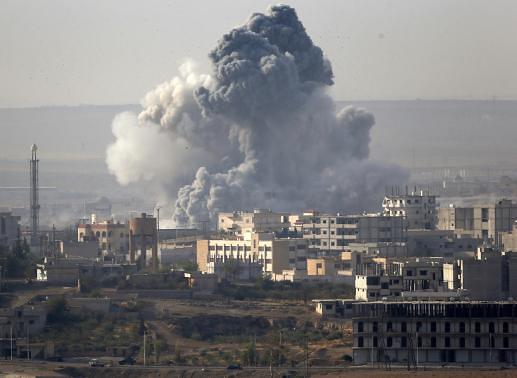 On July 24 Turkey approved the use of its airbases in the U.S.-led fight against ISIS. On July 25 Turkish warplanes carried out tactical strikes against Kurdish militias in the remote mountains of Iraqi Kurdistan.

A senior White House official released a tweet stating, “There is no connection between these airstrikes against PKK and recent understandings to intensify US-Turkey cooperation against #ISIL.”

The PKK, the Kurdistan Workers’ Party, the paramilitary arm of the Kurdish diaspora, have been fighting for their autonomy from the Turkish state for the past 30 years – the same PKK who has been helping the U.S. in the fight against ISIS.

The White House chose not to condemn the attacks on the Kurds. Rather they condemned the Kurds, our ally and recipient of $1.6 billion in Iraq Train and Equip Funding (ITEF).

Turkey has been aggressively defending itself from Kurdish minorities comprised of Zoroastrianists, Christians and agnostics in the 98 percent Islamic state. Turkey, like ISIS, deny Kurds the right to exist.

The Kurdish people have tried to assimilate into Turkish culture. Public display of Kurdish identity is outlawed. The Kurdish language is forbidden. So are Kurdish folktales. Kurdish names and dress are forbidden also.

The Kurdish people are the largest stateless minority in the world. 30 million Kurds are dispersed throughout regions in Turkey, Iraq, Iran and Syria. More than half live in Turkey.

The Kurds have been embroiled in the fight for existence since pre-Islamic times. They have survived the scorched earth policies of the Safavid as well as the chemical attacks of the Turks and Saddam Hussein. There is even a verse of prose steeped in the region’s culture that references Kurdish illegitimacy:  “O son of a Kurd, raised in the tents of the Kurds, who gave you permission to put a crown on your head?”

The PKK, however, have chosen not to assimilate. Turkey holds the PKK responsible for more than 30,000 civilian deaths in their fight for autonomy from the Turkish state over the past three decades. Turkey pressed the U.S. State Department to add the PKK to the Foreign Terrorist Organizations list in 1997.

In 2013 the PKK agreed to a truce as part of the “solution process” between the Turkish state and the Kurdish minority. That truce was broken by Turkey on Saturday.

There has been a push to de-list the PKK from the FTO; because one never knows when today’s insurgent will become tomorrow’s activist.

Perhaps if the PKK would call themselves by another name, like the Armed Islamic Group (GIA) of Algeria who now align themselves with the Al-Qaeda in the Islamic Maghreb, they might be de-listed. Considering that the Palestine Liberation Organization (PLO), a group who is hardly an ally in the fight against terror, can be de-listed, why not the PKK?

Complexities of war, ‘conflict’ or whatever the latest euphemism for aggression does make strange bedfellows. In the fight against ISIS, ancient prejudices must be hurdled.

The Kurds will continue to fight for their own existence and if that means partnering with the U.S. in the fight to secure it so be it. But they require a stable U.S. foreign policy and Turkey to acknowledge their right to exist.

President Obama’s blind eye to the Turkish aggression is another example of the on-going inconsistencies of muddled, foreign policy that based upon tweets, hashtags and vacillating red lines; where some allies are allowed to defend themselves and others are not.

The President, in his dogged obstinacy to engage U.S. troops against ISIS, relies heavily on his coalition of moderate Muslims and Kurds to do his fighting for him.

It is counterproductive to say the least to allow Turkey to go rouge and settle old scores. Erdogan must be reined in.

And I thought Obama detested the cowboy mentality.

Ancestor of Jefferson Davis on Confederate Flag: "It is time that this flag be folded"

In Jail? You May Qualify For Obama Pell Grant For Prisoners!