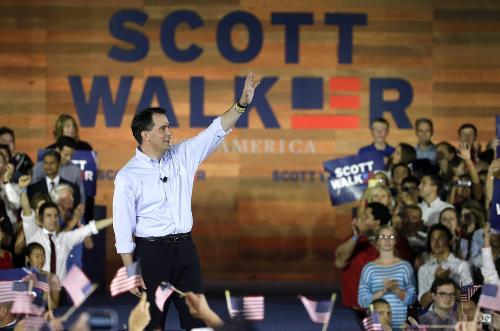 Wisconsin Governor Scott Walker tweeted early Monday morning “I’m in. I’m running for president because Americans deserve a leader who will fight and win for them.”

Joining the crowded GOP field, Walker becomes the 15th candidate to enter, just 6 months before the Iowa caucus. Even though Walker is entering the field late into the game, he is still top tier and most likely is the top ten candidates to appear in the first debate hosted by Fox News in three weeks.

“My record shows that I know how to fight and win. Now, more than ever, America needs a president who will fight and win for America,” Walker said.

Walker, a Conservative fireball, gained national momentum surviving a recall in 2012 following his 2011 fight to eliminate collective bargaining rights for public unions. This move sparked non-stop protestors protesting outside the States Capital in an effort to recall Walker from office. Walker prevailed to become the first governor in U.S. history to survive a recall attempt. Since the win, it has fueled Walker rise to the national spotlight that provided the foundation for his presidential run in the top against other his top-tier opponents such as Gov. Jeb Bush and Sen. Ted Cruz.

In his kick-off announcement bid, Walker with his sleeves rolled up as he roamed the stage without a podium, beginning his speech with “I love America” in the Expo Center in Waukesha, Wisconsin, a place where the governor celebrated his 2012 recall victory.

Promising to model his Wisconsin reforms in Washington, Walker highlighted his conservative record in the Badger State with lowering taxes, education, strict voter ID laws, gun rights and legislation that cut state funding to Planned Parenthood. “If our reforms can work in a blue state like Wisconsin, they can work anywhere in America,” he said.

In his speech, Walker outlined his plan for three reforms- Growth, Reform, and Safety. On growth, Walker called for a “pro- growth economic plan that helps individuals and families earn and save to achieve their American dream.”

Walker vowed to repeal Obamacare, approve the Keystone pipeline, roll back on out-of-control regulations, and getting rid of Common Core standards. On tax relief, Walker explained it with reference in buying a shirt from Kohl’s on sale and with discounted coupons and rewards, which he touts that Kohl’s practically give him the shirt for free. In explaining how Kohl’s makes it’s money off volume, Walker added Americans can do well in taking this approach in taxation by lowering rates and broadening the bases which encourage more economic participation, which he called it “Kohl’s Curve.”“Years ago, we saw this kind of plan work well under President Ronald Reagan. Back then, it was called the Laffer Curve. Today, I call it the Kohl’s Curve because I believe that you can spend your own money far better than the government – and that will help grow the economy,” he said.

With reform, Walker calls for the need for real reform in Washington. “Government that is closest to the people is usually the best,” Walker said. “This is why we should move power and money out of Washington and send it back to our states and communities in key areas like Medicaid, transportation, workforce development, and education.”

On national security, or what Walker likes to call it -safety, he outlined a muscular foreign policy of including more American forces in combat and to lift political restrictions on U.S. troops stationed in Iraq so “they can help the Kurds and Sunni allies reclaim land taken by ISIS.” Walker took jabs on Obama/Clinton foreign policy stating “America is leading from behind and we are heading towards a disaster…by doing business with Iran. Walker reminded the danger posed by Iran by including Kevin Hermening, a marine who was one of the American hostages during the Iran hostage Crisis in 1979. “Kevin Hermening is here today. He knows that Iran is not a place we should be doing business with. Iran hasn’t changed much since he and the other hostages were released on President Reagan’s first day in office.”

Walker declared his candidacy at the end of his speech. Outside the Expo Center, a group of protestors gathered as Walker made his official announcement.

“After a great deal of thought and a whole lot of prayer, we are so honored to have you join with us today as we officially announce that we are running to serve as your president of the United States of America.”

Kate’s Law, the Cure For the Illegal Immigrant Epidemic