Staff Sgt. Ahmed Altaie was the last American soldier to come home from Iraq. His body was turned over by Asaib Ahl al-Haq or The League of the Righteous; a Shiite terrorist group funded and trained by Iran.

Altaie had been kidnapped, held for ransom and then killed.

It was not Asaib Ahl al-Haq’s only kidnapping and murder of an American soldier. A year after Altaie’s kidnapping, its terrorists disguised themselves as Americans and abducted five of our soldiers in Karbala. The soldiers were murdered by their Shiite captors after sustained pursuit by American forces made them realize that they wouldn’t be able to escape with their hostages.

Higgins had been skinned alive.

Most Americans have never heard of Asaib Ahl al-Haq, sometimes referred to as the Khazali Network after its leader, even though it has claimed credit for over 6,000 attacks on Americans. Its deadliest attacks came when the Democrats and their media allies were desperately scrambling to stop Bush from taking out Iran’s nuclear program. Asaib Ahl al-Haq’s ties to Iran were so blatant that the media could not allow it to receive the kind of coverage that Al Qaeda did for fear that it might hurt Iran.

Obama had campaigned vocally against the Kyl-Lieberman Amendment which designated Iran’s Revolutionary Guard, the hidden force behind Asaib Ahl al-Haq and much of the Shiite terrorist infrastructure, a terrorist organization. He had accused its sponsors of “foolish saber rattling”.

Nancy Pelosi joined the Democratic Party’s pro-Iranian turn, rejected a vote on the amendment and sneered that if the kidnapping and murder of American soldiers was “a problem to us and our troops in Iraq, they should deal with it in Iraq.” Earlier that year, she had visited Syria’s Assad to stand with him against President Bush even while Assad was aiding the terrorists massacring American soldiers.

Once Obama took power, coverage of the war was scaled down so that Americans wouldn’t realize that the rising power of ISIS and Asaib Ahl al-Haq were already making a mockery of his withdrawal plans.

But Asaib Ahl al-Haq was not merely an anti-American terrorist group; it was an arm of the Shiite theocracy. As a Shiite counterpart to what would become ISIS, it had most of the same Islamic goals.

While Obama was patting himself on the back for the end of the Iraq War and gay rights, Asaib Ahl al-Haq was throwing those men and women it suspected of being gay from the tops of buildings.

When buildings weren’t available, it beat them to death with concrete blocks or beheaded them.

Its other targets included shelters for battered women, which the Islamist group deemed brothels, men who had long hair or dressed in dark clothing. And even while its Brigades of Wrath were perpetrating these atrocities, Obama and the Shiite Iraqi government embraced the murderous terrorist group.

Qais al-Khazali, the leader of Asaib Ahl al-Haq, and his brother Laith al-Khazali along with a hundred other members of the terror group were freed during Obama’s first year in office. (But to provide equal aid and comfort to the other side, Obama also freed the future Caliph of ISIS in that same year.)

“We let a very dangerous man go, a man whose hands are stained with US and Iraqi blood. We are going to pay for this in the future,” an unnamed American officer was quoted as saying. “This was a deal signed and sealed in British and American blood.” “We freed all of their leaders and operatives; they executed their hostages and sent them back in body bags.”

The releases were part of Obama’s grand strategy of reconciliation for Iraq. The miserable reality behind the upbeat language was that Obama was handing over Iraq to ISIS, Iran and its Shiite militias. 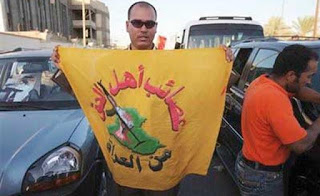 Last year, Maliki had made Asaib Ahl al-Haq and other Shiite terror groups into the Sons of Iraq that were to protect and defend Baghdad. Asaib Ahl al-Haq and its leader were now the Iraqi security forces. The Shiite death squads were in charge even while they continued carrying out ISIS-style massacres.

Obama belatedly decided to respond to ISIS, but his war strategy depends on Asaib Ahl al-Haq.

Officially his strategy is to provide training and air support for the Iraqi military. But the Iraqi military’s Shiite officers conduct panicked retreats in the face of ISIS attacks while abandoning cities and equipment. The goal of these retreats is to make Asaib Ahl al-Haq and other Shiite militias into the only alternative to ISIS for the United States. Even though he pays lip service to Sunni and Kurdish resistance to ISIS, Obama shows that he has accepted Iran’s terms by refusing to arm and support them.

While we focused on ISIS, its Shiite counterparts were building their own Islamic State by burrowing from within to hollow out the Iraqi institutions that we had put into place. ISIS is a tool that Iran is using to force international approval of its takeover of Iraq and its own nuclear program.

An Iraqi official last year was quoted as saying that Asaib Ahl al-Haq’s men give orders to the police and military. “Before they were just around, now they are high-ranking officers in the military.”

Some defense experts wonder if the Iraqi military even exists. The bulk of the forces in Tikrit were Shiite Jihadists and they are armed with American weapons that they receive from the Iraqi government. Asaib Ahl al-Haq boss Qais al-Khazali claims that soldiers and Shiite militia members both wear Iraqi military uniforms.

The capture of Tikrit became an opportunity for the Shiite terrorist groups and Qasem Soleimani, their Iranian terror boss, to boast about their victory and loot and terrorize the local Sunni residents.

Obama’s official plan to arm and train the Iraqi military and security forces is a dead end because like the mythical moderate Syrian rebels, they are fronts for moving money and weapons to Jihadists. We are arming ghost armies and funding fake political institutions and the money and weapons end up going to bands of Islamic terrorists, militias and guerrillas that are actually calling the shots.

By aiding Shiite militias in Iraq and Sunni militias in Syria, we’re backing both sides of an Islamic civil war.

Obama turned over Iraq to the Shiites and then backed the Muslim Brotherhood’s efforts to force the Shiites out of power in Syria. The Sunni-Shiite civil wars tearing the region apart were caused by those two decisions. His solution to the wars is to continue backing the same forces responsible for them.

Despite assorted denials, Obama’s real ISIS strategy is to have Iran do the fighting for him in Iraq.

But Obama is backing one ISIS against another ISIS. Why is a Shiite Islamic state that kidnaps and kills Americans, throws gays off buildings and massacres women better than a Sunni Islamic state that does the same things? Not only is the Obama strategy morally dubious, but it’s also proven to be ineffective. 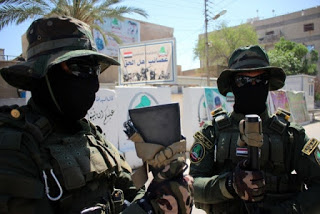 The rise of ISIS has helped Iran tighten its hold on Shiite areas in Iraq and Syria. Iran does not need to beat ISIS. Its interests are best served by maintaining a stalemate in which ISIS consolidates Sunni areas while Iran consolidates Shiite areas. The more Obama aids Iran and its terrorist forces as a counterweight to ISIS, the more Iran sees keeping ISIS around as being vital to its larger strategy.

Despite depending on our air support, Asaib Ahl al-Haq and its leaders are threatening to attack American planes and soldiers making it clear that they view the fight against ISIS and for Assad as part of a larger struggle for achieving Iran’s apocalyptic Shiite ambitions for the region and the world.

Iran’s Supreme Leader, Ayatollah Ali Khamenei recently gave a speech in which he warned that, “We must prepare the country’s conditions, the region’s conditions, and, Allah willing, the world’s conditions for the reappearance [of Imam Mahdi] will spread justice.”

Like ISIS, its Shiite counterparts envision an apocalyptic struggle in which the other branch of Islam will be destroyed, along with all non-Muslims, leading to regional and global supremacy. Iraq is only one of the battlefields on which this war is being fought and Obama’s inept mix of appeasement and regime change, abandoning allied governments while aiding enemy terrorists has helped make it possible.

Suggestion: Don’t Get All Your Information About Common Core From Fox News.

Hillary Clinton and Her Cohorts: Lying Liars and the Lies Told About Lies