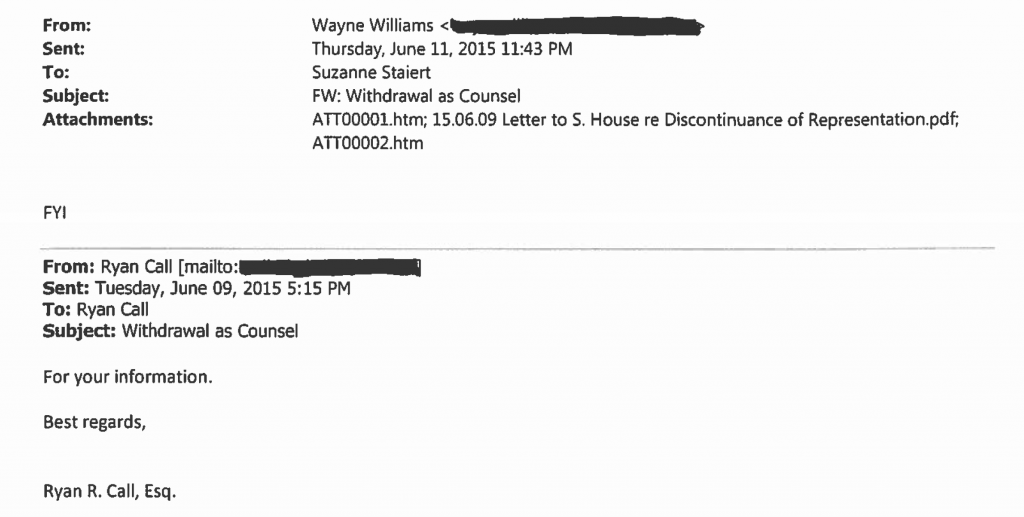 A document obtained by Politichicks under the Colorado Open Records Act (CORA) shows that the law firm Hale Westfall had been providing legal representation for the Colorado Republican Party for a slew of legal matters, but all of them had been redacted. The letter described ten items it “provided work on and/or is aware of.”

However, the Secretary of State’s office repeatedly refused to provide a copy without redaction, claiming attorney client privilege and deliberative process. It wasn’t until the letter was discussed on the Peter Boyles Show—a conservative talk radio program that is often critical of the GOP—that an unredacted version was released.

Former Colorado GOP state chair Ryan Call—also counsel at Hale Westfall— emailed an attachment of the letter to himself, and was in the custody of the SOS indicating it was received as a blind carbon copy. Call wrote in the body of the email, “For your information.”

The July 14th CORA request was submitted to the office of the Secretary of State which is currently held by Wayne Williams (R). The unredacted document that should have been received from the initial request was released seven days later after much persistence.

The CORA process was initiated. The first open records response did not include an attachment of the Hale Westfall letter.

The first follow-up reply was sent requesting a copy of the attachment from Call’s email regarding the discontinuance of legal counsel. The Secretary of State’s office sent a .pdf titled “GOP watcher panel—policy,” but no Hale Westfall letter.

A second follow-up reply was sent, again requesting a copy of the Hale Westfall letter—this time with a screenshot of the email in question. Politichicks received a copy of the document largely redacted (see attachment).

A third follow-up reply was sent requesting an immediate release of the unredacted copy or the legal basis for withholding its contents. This time, the claim was made for attorney-client privilege and deliberative process. The email stated, “The document contains deliberative legal process and is privileged attorney-client communication. The legal privilege belongs to and can only be waived by the client, the Colorado Republican Party. As we did not receive the document from the chair of the party, we do not have a waiver of the privilege from the current chair.”

A fourth follow-up reply was sent disputing attorney-client privilege and deliberative process, requesting 1) statutory citations and legal references for the authority for withholding the Hale Westfall letter on the basis of attorney-client privilege in consideration that the Secretary of State was not the client of Hale Westfall, and 2) the required sworn statement explaining why this document is privileged and why disclosure would cause harm to the public interest, as per state law under the claim of deliberative process.

(According to Colorado Revised Statute 24-72-204, records are protected under deliberative process privilege “if the material is so candid or personal that public disclosure is likely to stifle honest and frank discussion within the government.”)

Finally!: A short time after the the letter was discussed on talk radio, the Secretary of State’s office reversed its refusal, stating, “As required by law and rules promulgated by the Colorado Supreme Court, we withheld the document as privileged attorney-client communication. This morning we spoke with the parties involved and received a waiver. As such the letter is attached.”

This is the timeline in which the document in question traveled from Hale Westfall to the Secretary of State’s office.

June 9th, 5:15PM—Attachment of Hale Westfall letter sent from Ryan Call to Ryan Call, presumably blind carbon copied to the Secretary of State’s office and others unknown, “For your information.”

The letter addressed to the chairman of the Colorado Republican Party stated, “I respectfully inform you that Hale Westfall, LLP, will discontinue its representation of the Party effective immediately, subject to any necessary work to transition existing matters to other counsel.”

It was believed by many Republican activists that House terminated the contract with Hale Westfall, but the wording of this letter now put that into question while raising ten new ones—exactly what were those ten legal issues faced by the Colorado Republican Party? Those ten new questions were answered with the release of the unredacted version.

After knowledge of the Hale Westfall letter became public, it was requested by others who also received an unredacted copy. The document was posted here.