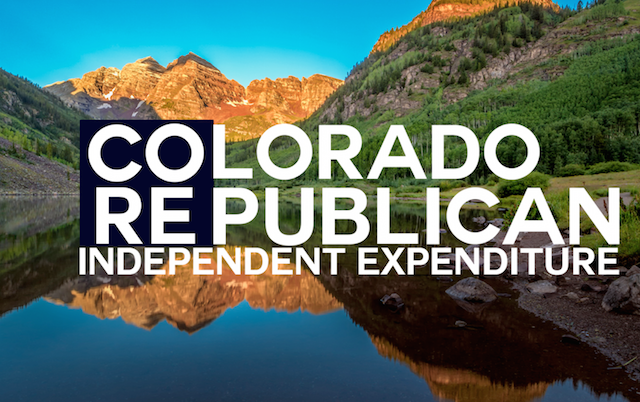 Luis Toro of Colorado Ethics Watch revealed that a deal to dissolve the controversial SuperPAC known as the “Colorado Republican Party Independent Expenditure Committee” (IEC) was nixed by the state GOP. Colorado Ethics Watch has been involved in an ongoing lawsuit with the Colorado Republican Party and the Colorado Secretary of State over the ability of a political party to create and control an independent expenditure committee .

The IEC has been referred to as a Super PAC because it allows the Colorado GOP to raise unlimited funds and receive corporate donations.

Colorado Republican Party Chair Steve House had been alluding to the liberty wing of the party that he would close the IEC—and led Toro to believe the same in a May 26th meeting in which Toro and House discussed conditions to settle the Colorado Ethics Watch lawsuit.

Toro said that they reached “agreement in principle” with House while the firm Hale Westfall had been representing the state GOP—but that once Chris Murray of Brownstein Hyatt Farber Schreck took over, the agreement fell apart.

The terms between Colorado Ethics Watch and the Colorado Republican Party (CRP) discussed in email correspondence were:

Toro then drafted the settlement agreement in which Ethics Watch would withdraw their lawsuit under the condition of the dissolution of the IEC. The draft was emailed on a Friday to Westfall. The following Monday, Toro received a call from Murray stating there would be no settlement.

Here is the timeline:

Tuesday, May 26th: Luis Toro meets with Steve House along with CRP counsel Richard Westfall and an attorney for the Secretary of State (SOS). House approves shutting down the IEC if Colorado Ethics Watch drops their lawsuit. Toro sends an email outlining the agreement in principle. Westfall responds on behalf of House with an email suggesting a slight language change.

Thursday, June 2nd: Ethics Watch receives an email reply from SOS counsel, stating they are fine with the terms outlined in principle, but want to see the final draft before they sign off on it. Westfall and Toro agree that Toro will work on the first cut of the settlement draft.

Friday, June 5th: Toro emails a draft of the settlement agreement to Westfall.

Monday, June 8th: Toro receives a call from Chris Murray, and tells him that he is taking over as counsel for the CRP and that there will be no settlement.

Tuesday, June 16th: House speaks at a Republican meet-up called Liberty Libations. When someone from the audience asks point blank if the party is still defending the IEC, House says, “No.” Then he admits a legal case is still pending and declines further comment.

Colorado Ethics Watch is not the only critic of the IEC. Some Republicans have also been questioning if the IEC can function independent of the party since its inception. Now, a review of new filings leads to more questions. 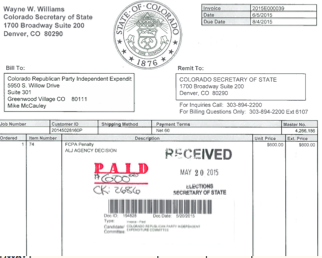 A court ordered payment to the organization Campaign Integrity Watchdog appears to be paid by the Colorado Republican Committee—and is reported to the FEC as “web services” with a wrong address and incorrect payout. The state GOP’s FEC report showed an

expenditure of $255 to Campaign Integrity Watchdog for “web services”—services that the organization does not perform. The IEC reported no payments to Campaign Integrity Watchdog, though a court ordered the IEC in April to reimburse them $105 for “costs incurred for pursuit of judgement” from their legal complaints against the IEC. Matt Arnold of Campaign Integrity Watchdog stated that the expenditure should have been reported as $255 for court-ordered total payments of costs and fees pursuant to a second winning complaint against the IEC. However, a mysterious payment of $255 to the Secretary of State’s Office attributed to more “registration fees” is listed in the Colorado Republican Committee’s report near the same date.

Former Utah GOP Treasurer Mike McCauley received disbursements for services by both the state party itself and the IEC—further blurring the line of an “independent” expenditure committee. Because the state party does not have a consistent payment arrangement with McCauley, it is unclear if the party might be paying McCauley for services performed for the party with IEC funds. Filings with the FEC show McCauley’s relationship with the Colorado GOP dates back to 2012. According to recent FEC filings, the Colorado Republican Party paid McCauley & Associates $1500 to $5,000 per month, depending on the month. The IEC made a June payment to McCauley & Associates for $5,265.25, as per the July 15th report filed with the Secretary of State.

The IEC’s troubled past

The IEC boasts of a notorious connection to convicted felon Tyler Harber who was appointed as the IEC’s executive director in May of 2014. A donation of $10,000 launched the funding of the IEC on May 27, 2014. The next day, Harber was paid $8000 in consulting fees by the IEC.

Over half of all funds raised by the IEC were paid to Harber before his departure. 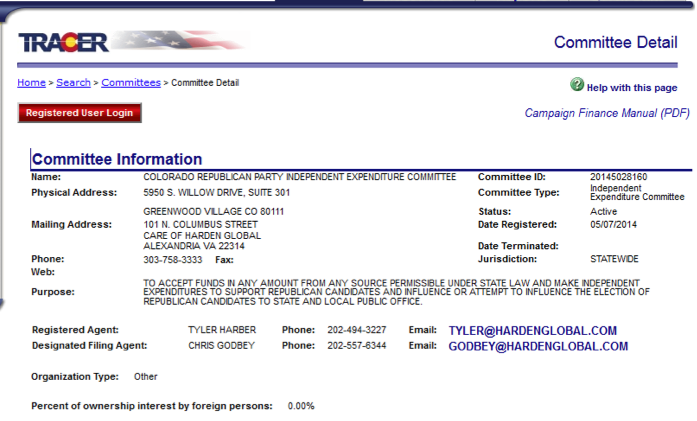 THIS Explains Why the GOP Can't "Compromise" With Democrats.