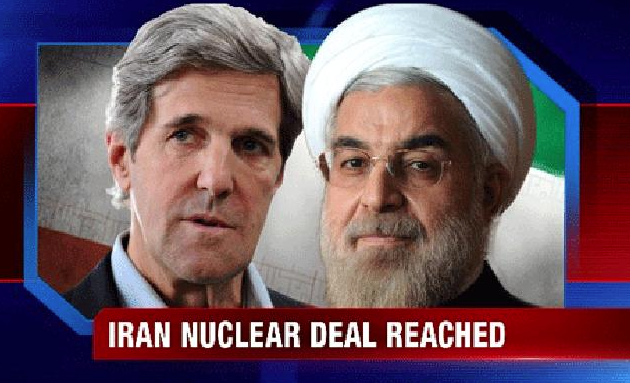 Rather than try to interpret multiple news sources, this is a report about the Iran nuclear deal from Fred Fleitz of the Center for Security Policy, one of our most respected cites for Middle Eastern news:

The nuclear agreement with Iran announced Tuesday was billed by EU, Iranian and US officials as historic. It is that: it is a historically dangerous accord that will destabilize the Middle East by legitimizing the nuclear program of a radical Islamist state and a state-sponsor of terror.

The provisions of this agreement – available HERE – contains minor concessions by Iran but huge concessions by the United States that will Iran to continue its nuclear program with weak verification provisions. Conditions for sanctions relief will be very easy for Iran to meet.

It is crucial that the U.S. Congress send a message to the world by decisively rejecting this agreement and making it clear that a future Republican president will reject it on his or her first day in office.

Iran has agreed to replace the core of its under-construction Arak heavy-water reactor so it produces less plutonium and to send the spent fuel rods of this reactor out of the country. This is a significant reversal of pre-2013 U.S. policy that work on this reactor be halted permanently because it is a serious nuclear proliferation threat. Because of this provision, Iran will develop its expertise on operating and building heavy-water reactors during this agreement.

As a result of these provisions, this deal will actually shorten the timeline to an Iranian nuclear bomb and enable Iran to produce many more nuclear bombs than it currently can construct using enriched uranium and plutonium fuel.

In his press conference today, Secretary Kerry tried to explain away the agreement’s lack of anytime, anyplace inspections of non-declared nuclear sites by claiming Iran will be prevented from pursuing a nuclear weapons program since Iran’s declared nuclear supply chain will be subject to monitoring. This will not reassure Iran’s neighbors since the agreement will do nothing to stop activities such as warhead development and possibly covert uranium enrichment at undeclared sites.

Sanctions relief will be fairly easy for Iran to reach. UN, EU, and US sanctions will be “terminated” on “implementation day” – when the IAEA certifies Iran has complied with specified commitments in the agreement. These commitments are fairly easy for Iran to meet. There are provisions for dispute resolution and re-imposing sanctions due to Iranian non-compliance, but it is hard to imagine Russia or China will agree to this. Moreover, given President Obama’s obsession for a nuclear agreement with Iran and his administration’s failure to hold Iran accountable for cheating on its commitments during the nuclear talks, I believe there is no chance this administration will stand in the way of declaring Iran in compliance with the new agreement. This means Iran is likely to soon get access to an estimated $100 billion in frozen assets.

Some of the most stunning concessions concern lifting embargoes on conventional arms and ballistic missiles. The conventional arms embargo will stay in place for five years and the ballistic missile embargo would be in place for eight years unless the IAEA definitively clears Iran of any current work on nuclear weapons. However, the IAEA is very unlikely to find evidence of current nuclear weapons work since it won’t be allowed to inspect non-declared nuclear sites where this activity is taking place. This means these embargoes could be lifted much sooner.

These are stunning US concessions. Under this agreement, a state-sponsor of terror that currently is sponsoring terrorist groups and destabilizing the Middle East, will gain free access to the international arms market. In addition, Iran, which refuses to sign ballistic missile arms control treaties, will be freed of restrictions on its missile program which expert believe is being designed as a nuclear weapons delivery system Iran’s missiles could currently hit Europe and it is believed to be developing ICBMs that could strike the United States.