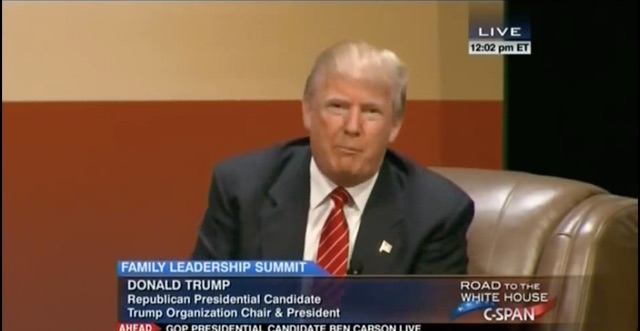 McCain, a senator from Arizona, criticized Trump recent rally in Phoenix that drew a crowd of 15,000. The rally was held against illegal immigration where McCain said the businessman event “fired up the crazies, galvanized them and really got them activated.”

Moderator Frank Luntz pressed Trump recent comment of calling a war hero veteran “a dummy” over twitter. Luntz described McCain experience as a POW saying “McCain spent more than five years as a prisoner of war in Vietnam after his plane was shot down during combat.”

Trump shot back on this rhetoric by saying McCain is “not a war hero, he was a war hero because he was captured. I like people who weren’t captured.”

Trump was asked after the speech if he would apologize to McCain in which Trump bluntly said “No.”

I am not a fan John McCain because he has done so little for our Veterans and he should know better than anybody what the Veterans need, especially in regards to the VA. He is yet another all talk, no action politician who spends too much time on television and not enough time doing his job and helping the Vets. He is also allowing our military to decrease substantially in size and strength, something which should never be allowed to happen.

Furthermore, he was extremely disrespectful to the thousands upon thousands of people, many of whom happen to be his constituents, that came to listen to me speak about illegal immigration in Phoenix last week by calling them “crazies”.

These were not “crazies”—these were great American citizens.

I have great respect for all those who serve in our military including those that weren’t captured and are also heroes.

I want to strengthen our military and take care of our Veterans. I want to MAKE AMERICA GREAT AGAIN especially for those that serve to protect our freedom. I am fighting for our Veterans!

Presidential candidates were quick to distance themselves from Trump’s remarks and to condemn them:

.@SenJohnMcCain is an American hero & all POW’s deserve our nation’s highest debt of gratitude. @realDonaldTrump‘s comments are disgraceful.

Enough with the slanderous attacks. @SenJohnMcCain and all our veterans – particularly POWs have earned our respect and admiration.

.@SenJohnMcCain is an American hero, period. I’ll denounce any attack against his service and anyone else who wears the uniform. -SW

After Donald Trump spends six years in a POW camp, he can weigh in on John McCain’s service

The Fall of Mohamed Morsi and the Conspiracy that Created ISIS