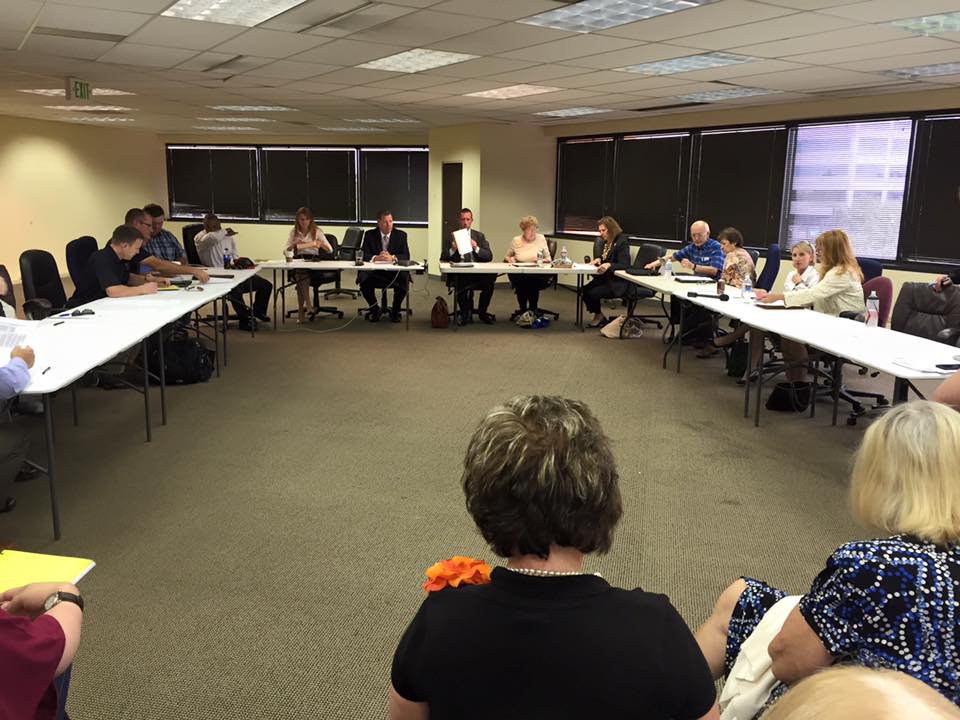 A sweltering boardroom with no air-conditioning, no cold water, and no lunch during a six hour meeting. Witnesses waiting in a stuffy hallway for hours without chairs, sitting on the floor. This is the scene of the June 26th meeting of the executive committee of the Colorado Republican Party. The issues on the table—accusations of blackmail, innuendo of a federal investigation, allegations of sexual misconduct, broken promises, and the character of state party Chair Steve House.

Does integrity matter? That question came to the forefront of Colorado politics as the scandal-embroiled chair received a nod of confidence on a 22-1 vote. The executive committee affirmed the party’s approval of House and his ability to lead the state GOP despite the damage done to the party under his watch.

Coffman received the highest vote count of any Republican in her bid for attorney general. She was one of House’s biggest supporters in his campaign for chair and even gave his nominating speech—which is why it came as a surprise to many that she would seek his resignation.

House claimed the fateful meeting was over his refusal to hire Harvey, but Coffman never wanted him on staff. Several insiders corroborated Coffman’s opposition to Harvey being employed by the state GOP.

According to Tancredo, the meeting addressed a litany of concerns including the type of character assassination that could bring untold financial liability to the party. Tancredo said that House slandered Harvey in front of radio personnel and party leaders. The allegation: Statements by House that he feared Harvey would embezzle money from the state party due to Harvey’s impending divorce and bankruptcy proceedings. But there was no divorce and no bankruptcy.

House’s alleged statements were filled with lies. There was no reason to fear embezzlement.

Tancredo shared that after House laid false claims about Harvey, the statements got back to Coffman. She called Harvey to check on him, only to learn that House lied about Harvey getting a divorce and filing for bankruptcy—and that House communicating fear of embezzlement was just a cover story to explain his breaking a campaign commitment to hire Harvey. Coffman then confronted House about theses statements and other issues at the June 15th meeting.

House said in a press release, “If I refused to meet their demand to resign, they threatened that a potential lawsuit may be filed and that false rumors that I have been unfaithful to my wife would be made public.” A woman came forward shortly thereafter confessing to an adulterous relationship with House.

At the party’s June executive committee meeting less than two weeks later, House backtracked his accusation of blackmail and instead said that the trio were only giving him “constructive criticism.”

Prior to their vote of confidence, the executive committee held a vote to not allow a secret ballot on House’s ability to lead the party. Inside sources state that the committee voted 11-8 to hold an open vote—suggesting that if votes had been cast by secret ballot, they would have reflected a more divided committee.

While the vote by the committee put on a public display of party unity, Republicans in private conversations continue to ask questions indicating a deep division. Do executive committee members really believe that integrity doesn’t matter? Or were they bamboozled by psychological warfare style tactics in the boardroom?

In addition to the physical environmental challenges, an atmosphere of intimidation may have also influenced the outcome: 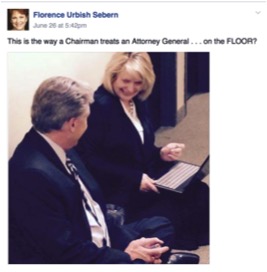 Meanwhile, people outside the meeting were treated to similar conditions.

In an exclusive interview with Politichicks, Coffman broke her silence and exposed a stunning disregard for decorum in its treatment of both elected officials and party activists by the executive committee. Inside sources provided additional details, corroborating Coffman’s account of events.

The attorney general arrived at the meeting at 10:00 AM. Coffman was told that there might be a conference room on the second floor in which the tenants might allow for her to use, but she declined. Coffman said that she was hesitant to leave the immediate vicinity since no one had announced when she would be called in to meet with the committee.

As Coffman waited to be called into the meeting, she sat on the floor in the hallway on the third floor of the KeyBank building in Greenwood Village. One of the committee members eventually offered the attorney general a chair.

Coffman estimated that is it was in the high 70s to low 80s in the hallway—others in attendance described the temperature as sweltering. She was told the air conditioning was out because of a lightning strike the previous day. Executive committee members went in and out periodically to use the restroom or get a drink.

It was sometime between 12:30 and 1:00 when people waiting in the hallway were told they could come into the meeting room. Committee members did not take a lunch break, but proceeded to discuss whether the next phase of the meeting concerning the party chairman’s leadership would be held in an open session. After ten minutes, the committee voted to again close its session.

Inside sources said that as people waited in the hallway in the afternoon, the executive committee debated for almost two hours how the rest of the meeting would be managed and whether Coffman should be allowed to speak at all. One source stated that if not for Vice Chair Derrick Wilburn speaking up in favor of allowing Coffman to speak, the attorney general would have been denied the opportunity to address the committee.

The committee limited Coffman’s comments, halting her from presenting her prepared remarks in their entirety. “I was given five minutes to speak and five minutes for questions,” Coffman said. She confirmed that Arapahoe County Chair Joy Hoffman acted as the meeting chair and laid out the ground rules to her.  Coffman shared that the executive committee was interested only in what happened during the June 15th meeting—and nothing else.

“I galloped through my prepared chronology of events but was not able to finish in five minutes. I felt I had to leave out significant facts,” Coffman said.

In addition to the attempt to prevent the attorney general from speaking, the committee was successful in stymying former US Congressman Tom Tancredo and Pueblo County Chair Becky Mizel. When the group was ready to call Tancredo, he was outside the building seeking refuge from the sweat filled hallway. Sources state that Hoffman refused to allow Tancredo to be called into the meeting by phone or text. Mizel was also denied from distributing a statement of grievances to the committee, outlining concerns she and others shared about House’s ability to effectively lead the party.

Tancredo said that the meeting appeared to lack organization from the beginning. He stated that he contacted executive committee members to confirm whether or not he would be requested to speak at the meeting, but received no solid answer. “I wanted to know if I needed to be there. Should I bother to come? Should I stay home?”

Former state Senator Ted Harvey was also in attendance. Harvey said that he had no prepared remarks and was only there to answer questions of the executive committee. Harvey did not participate in the meeting.

House’s alleged mistress came to the meeting ready to speak, but was denied the opportunity due to restrictions on the information allowed to be presented.

After more than six hours, the meeting adjourned.

“I do not feel I or any of my colleagues were treated respectfully that day. I am not sure there is another of my AG colleagues in the country who would have waited under the same circumstances. I will simply say the excom appeared to be unsure of its authority, process, or purpose,” Coffman said.

The House scandal continues to hold momentum in Republican circles as grassroots activists decry the lack of information that came out of the executive committee meeting. There has been talk about petitioning the issue before the GOP’s State Central Committee which would be public and open to the press. As of yet, a petition has not been circulated.

Committee member Sue Moore—the Denver County Chair elected in the February liberty wave—wrote, “All I will say is that procedures were agreed upon and were followed.  We tried to make it as fair as possible to all parties involved and latitude was given to both Cynthia and Becky.” Moore refused to answer simple questions on the meeting format and seating arrangements.

Former Vice Chair Mark Baisley was asked if he felt it was appropriate to give the attorney general only five minutes to speak and five minutes for question and answer time. “No,” Baisley replied.

Committee member Isaiah Hess was questioned by several activists at recent Republican meet-up about his vote of confidence in Steve House. Hess said that given the information presented, he felt there was not enough evidence to warrant a finding that House was incompetent of fulfilling his duties as state chair. Hess was joined by all but one executive committee member in giving a thumbs up to House.

Republican activists described the “liberty” members of the committee as meek followers without the backbone to challenge tactics that were utilized to guide the meeting to an outcome in support of House.

Mizel cast the lone dissenting vote of no confidence in House.

Did the executive committee’s vote of confidence send an unintended message that it is permissible in the GOP to spread lies about elected officials? Is it acceptable to malign reputations through false claims of blackmail—only to flip-flop in the name of party unity?

Iranian Deal: Americans Left Behind in Iranian Prison—Not a Priority