I am frequently attacked by a rapidly-radicalizing Left as a religious freedom advocate. My assailants, all atheists, make no secret of their intentions to strip away our right to worship, period. They insist Christians seek to manufacture a national theocracy, yet support replacing the Constitution with Sharia law.

The dictionary defines a theocracy as follows:

They scream of American society’s ecclesiastical rape upon viewing Christian imagery. The decline of religious liberty initiated during the 1960’s with the full ban of the Lord’s Prayer and reading from the Bible in public schools in School District of Abington Township, Pennsylvania v. Schempp (1963). This launched the amoral avalanche killing our civil liberties. The Supreme Court cited in Abington School District v. Schempp the school’s violation of the First Amendment’s Establishment Clause, forbidding the state from establishing an official religion while prohibiting favoritism for one religion over others, the same with respect to the right not to worship.

Specifically, the full First Amendment protects nearly all the liberties Americans for more than 224 years have enjoyed. Any shows of deference in favor of one faith over all others, or of atheism over peoples of faith, are both unconstitutional and a violation of the American imperative for the individual’s civil rights:

Congress shall make no law respecting an establishment of religion, or prohibiting the exercise thereof; or abridging the freedom of speech, or the press; or the right of the people peacefully to assemble, and to petition the government for a redress of grievances.

There is no constitutional language mandating “separation of church and state”. It is illegal for Congress to  establish a national religion, to prohibit an individual’s right to worship. There are no legal limitations on free speech or censorship of the media, the right to a peaceful assembly nor petitioning the government as an activist. And while government can neither establish a state religion nor prohibit the rights to worship, no language specifies government and religion cannot coexist in a symbiotic cohabitative relationship. 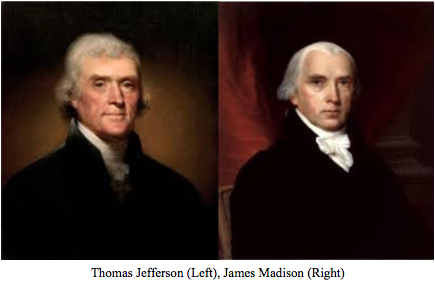 The concept, however, was constructed on the grounds of tradition, or “common law”. We must credit Thomas Jefferson for this juxtaposition of political paradox in his reply to the Danbury (CT) Baptist Association January 1, 1802 as he entered his second year as president. A devout Deist as one of the American children of the European Enlightenment, President Jefferson replied to the Danbury congregation under intense scrutiny, explaining why he would refrain from declaring national days of prayer and thanksgiving. In the process, Jefferson was the first president complicit in political correctness. He consulted two politicians in Federalist-dominated New England while conveying neither Congress nor the president should engage in policies violating the Establishment Clause.

To messers Nehemiah Dodge, Ephraim Robbins, & Stephen S. Nelson, a committee of the Danbury Baptist association in the state of Connecticut.

The affectionate sentiments of esteem & approbation which you are so good as to express towards me, on behalf of the Danbury Baptist association, give me the highest satisfaction. my duties dictate a faithful & zealous pursuit of the interests of my constituents, and, in proportion as they are persuaded of my fidelity to those duties, the discharge of them becomes more & more pleasing.

Believing with you that religion is a matter which lies solely between man & his god, that he owes account to none other for his faith or his worship, that the legitimate powers of government reach actions only and not opinions, I contemplate with sovereign reverence that act of the whole American people which declared that their legislature should “make no law respecting an establishment of religion, or prohibiting the free exercise thereof;” thus building a wall of eternal separation between Church & State. Congress thus inhibited from acts respecting religion, and the Executive authorised only to execute their acts, I have refrained from prescribing even those occasional performances of devotion, practiced indeed by the Executive of another nation as the legal head of its church, but subject here, as religious exercises only to the voluntary regulations and discipline of each respective sect,

[Jefferson first wrote: “confining myself therefore to the duties of my station, which are merely temporal, be assured that your religious rights shall never be infringed by any act of mine and that.” These lines he crossed out and then wrote: “concurring with“; having crossed out these two words, he wrote: “Adhering to this great act of national legislation in behalf of the rights of conscience“; next he crossed out these words and wrote: “Adhering to this expression of the supreme will of the nation in behalf of the rights of conscience I shall see with friendly dispositions the progress of those sentiments which tend to restore to man all his natural rights, convinced that he has no natural rights in opposition to his social duties.“]

I reciprocate your kind prayers for the protection & blessing of the common father and creator of man, and tender you for yourselves & the Danbury Baptist [your religious] association assurances of my high respect & esteem.

The first president declared “man of the people”, Jefferson’s populism altered political positions he initially considered paramount for a just republic. And while he believed the popular sovereignty must dictate the course of republicanism, he attempted to interpret the Constitution verbatim. Jefferson permitted his personal disdain for religion under an omnipotent supernatural entity in lieu of his preference for one based on reason affect his own latent prejudice favoring secular scientism over Christian ethos.

James Madison penned in The Federalist Papers No. 51 federalism must balance and preclude the rise of dominant factions. This includes the difficult task of weighing the supremacy of the majority versus the right of the minority to culturally-abstain. He warned such a rise of a dominant minority class would grow militant, leading to anarchy and “the death of civil society itself”.

It is of great importance in a republic not only to guard the society against the oppression of its rulers, but to guard one part of the society against the injustice of the other part. Different interests necessarily exist in different classes of citizens. If a majority be united by a common interest, the rights of the minority will be insecure. There are but two methods of providing against this evil: the one by creating a will in the community independent of the majority — that is, of the society itself; the other, by comprehending in the society so many separate descriptions of citizens as will render an unjust combination of a majority of the whole very improbable, if not impracticable. The first method prevails in all governments possessing an hereditary or self-appointed authority. This, at best, is but a precarious security; because a power independent of the society may as well espouse the unjust views of the major, as the rightful interests of the minor party, and may possibly be turned against both parties. The second method will be exemplified in the federal republic of the United States. Whilst all authority in it will be derived from and dependent on the society, the society itself will be broken into so many parts, interests, and classes of citizens, that the rights of individuals, or of the minority, will be in little danger from interested combinations of the majority. In a free government the security for civil rights must be the same as that for religious rights. It consists in the one case in the multiplicity of interests, and in the other in the multiplicity of sects. The degree of security in both cases will depend on the number of interests and sects; and this may be presumed to depend on the extent of country and number of people comprehended under the same government. This view of the subject must particularly recommend a proper federal system to all the sincere and considerate friends of republican government, since it shows that in exact proportion as the territory of the Union may be formed into more circumscribed Confederacies, or States oppressive combinations of a majority will be facilitated: the best security, under the republican forms, for the rights of every class of citizens, will be diminished: and consequently the stability and independence of some member of the government, the only other security, must be proportionately increased. Justice is the end of government. It is the end of civil society. It ever has been and ever will be pursued until it be obtained, or until liberty be lost in the pursuit. In a society under the forms of which the stronger faction can readily unite and oppress the weaker, anarchy may as truly be said to reign as in a state of nature, where the weaker individual is not secured against the violence of the stronger; and as, in the latter state, even the stronger individuals are prompted, by the uncertainty of their condition, to submit to a government which may protect the weak as well as themselves; so, in the former state, will the more powerful factions or parties be gradnally induced, by a like motive, to wish for a government which will protect all parties, the weaker as well as the more powerful.

“The Great Little Madison” not only warned against such a rise February 6, 1788, but is shaking his head in disbelief as he rolls in his grave now that American civility is on its death bed.

Daniel Greenfield: How Islam Got Its American Priveleges