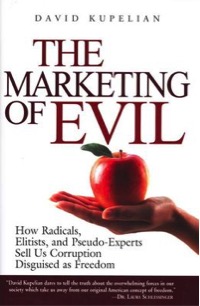 As we are seeing by the latest Gallup poll, Americans have come to not just tolerate or embrace, but to also champion many things that we would have considered repulsive not so very long ago. But how has this come to be so?

It’s not really that difficult to understand once we see that our generation has been introduced to some of the most powerful propaganda techniques and brilliant marketing strategies in modern history. Savvy marketers are now using their knowledge of mass manipulation borrowed from modern psychology to seduce us into not only buying cosmetic products, but also new feelings and beliefs about things we formerly rejected as a culture.

This writer certainly knows because she once bought into these things herself.

It’s all about manipulation.

As David Kupelian, author of The Marketing of Evil writes:

“The plain truth is, within the space of our lifetimes, much of what Americans once universally abhorred has been packaged, perfumed, gift wrapped, and sold to us as though it had great value. By skillfully playing on our deeply felt national values of fairness, generosity, and tolerance, these marketers have persuaded us to embrace as enlightened and noble that which all previous generations since America’s founding regarded as grossly self-destructive—in a word, evil.”

If we don’t understand what these crafty marketers are doing—and if we don’t understand our own flawed human nature that allows us to be duped—we are pretty much doomed. But once we come to understand the subtle seductions and clever strategies that are leading our nation to destruction, we simply stop buying the garbage.

Kupelian explains, “It’s that simple. If we know the marketer is a con man, we just tell him to get lost.”

So, how have these genius marketers been able to achieve great success in such a short period of time? As Marshall Kirk and Hunter Madsen, writers of After the Ball (the public relations manual to selling homosexuality to Americans), and the masterminds behind the ‘gay rights’ movement, describes, “The campaign… depends centrally upon a program of unabashed propaganda, firmly grounded in long-established principles of psychology and advertising.”

Basically, Kirk and Madsen’s “war strategy” has been to force acceptance of homosexuality into the mainstream, silence the opposition, and then to fully convert American society. This strategy is being used not just in the “gay rights” movement, but anytime Progressives want to move their next agenda forward.

Here’s how it works:

1.Seperability. Changing what people actually think and feel by breaking their negative associations with the specific cause and replace them with positive associations.

“Simple case in point: homosexual activists call their movement “gay rights.” This accomplishes two major objectives: (1) Use of the word gay rather than homosexual masks the controversial sexual behavior involved and accentuates instead a vague but positive-sounding cultural identity—gay, which, after all, once meant “happy”; and (2) describing their battle from the get-go as one over “rights” implies homosexuals are being denied the basic freedoms of citizenship that others enjoy.”

After all, whoever frames the terms of the debate almost always wins. Think about it–the abortion rights movement prevailed by framing the debate as choice instead of abortion.

It’s all in the labeling.

2.Desenstization: This technique is described as inundating the public in “continuous flood of advertising of a particular issue, presented in the least offensive fashion as possible.” Whether it be: pedophilia (“adult-child love”), abortion (“choice”), polygamy (“Big Love”), rioting (“social justice”), or other promiscuous sexual practices (“fun experimentation”), the goal is to talk about the specific issue until it becomes thoroughly tiresome. Incorporate it into television, radio, and in the media (in a more positive light) at every opportunity. Just get people to think that it’s just another thing—meriting no more than just a shrug of the shoulders.

Michael Warren describes in Seeing Through the Media, “…it is not raw overt coercion; it is one group’s covert orchestration of compliance by another group through structuring the consciousness of the second group.”

“Structuring the conscience” of others? If that phraseology is uncomfortably reminiscent of various mind control and brainwashing tales you might have heard over the years, don’t be surprised. Manipulating the emotions and thereby restructuring the thoughts and beliefs of large numbers of people is what modern marketing is all about.”

Basically, the strategy is to discredit anyone who disagrees with the marketed belief or feeling (“product”) by associating them with haters and lowlife murderers (and, of course, the Nazis).

Every single one of us has a conscience (that little moral standard thingy that God has tucked away inside each one of us) that causes us conflict when we’re doing something wrong.

“But if we tumble into the grip of dark forces we don’t understand and start to defend our obsessions and compulsions, we inevitably come to regard our conscience as our enemy. And although we may be somewhat successful in drowning out that inner warning bell, what happens when this same rejected conscience factor appears in another person and gets too close to us for comfort? We feel threatened.

Therefore, we feel compelled to silence the “voice of conscience”—not just the one inside us, but the one in other people, which tends to revive our own conscience with which we are at war. This means we can’t tolerate dissent. We simply can’t stand it. It makes us want to scream.”

Jamming is an effective tool to shutting people up. Calling dissenters “haters” or “bigots” works very well because the general public does not want to be associated with such grotesque people. Since nobody likes to be isolated, dissenters simply learn to keep quiet. That’s Jamming a sock in the old mouth.

And, of course, if that doesn’t work, resort to Jamming a few lawsuits, destroying everything the dissenter has. Just ask some Oregon bakers about this one.

4.Conversion: This is just straight-up brainwashing.

As Kirk and Madsen explain:

“We mean conversion of the average American’s emotions, mind, and will, through a planned psychological attack, in the form of propaganda fed to the nation via the media. We mean “subverting” the mechanism of prejudice to our own ends—using the very processes that made America hate us to turn their hatred into warm regard—whether they like it or not.

In conversion, we mimic the natural processes of stereotype-learning, with the following effect: we take the bigot’s good feelings about all-right guys, and attach them to the label “gay” either weakening or, eventually, replacing his bad feelings toward the label and prior stereotype.

Whereas in Jamming the target is shown a bigot being rejected by crowd for his prejudice against gays, in Conversion the target is shown his crowd actually associating with gays in good fellowship. Once again, it’s very difficult for the average person, who, by nature and training, almost invariable feels what he sees his fellows feeling, not to respond in this knee-jerk reaction to a sufficiently calculated advertisement.”

On the road to conversion, as Kirk and Madsen boast, you are I are shown (often via the power of the media or ‘boob tube’) how our peers are all embracing and even championing the latest thought or belief on the market (as corrupt or immoral as it actually may be). Therefore, we might as well buy it, too. After all, if everyone else appears to be loving it, why shouldn’t we? It’s hip. It’s hop. It’s fashionable.

Brilliant Marketing! That’s why we are all buying it by the boatload.

Principal Removed for Expressing an Opinion About McKinney Cop