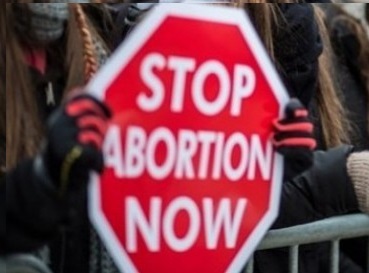 A group called Miles Chile has released a set of videos to promote legalizing … decriminalizing, abortion in Chile. The three disturbing videos show fictional methods of aborting a baby; throwing yourself in front of a car, tripping on high heel shoes and throwing yourself down stairs. The videos are particularly shocking because the women are portrayed as very visibly pregnant. The story and the movement are making an impact on social media and apparently with the Chilean government.

The campaign, “#LEYabortoTERAPEUTICO ” on social media, supports a bill that would permit women in Chile to abort under these circumstances; the baby is malformed or unlikely to survive, rape, and if the mother’s life is endangered. The president of Chile, Michelle Bachelet, also supports the bill. The campaign, and many of those behind it, seem to ask for much more.

In 1931, abortion was legalized in Chile to save a woman’s life. Dictator Gen. Augusto Pinochet, president from 1974 to 1990, made it totally illegal. They’re slowly “progressing” according to younger citizens. AOL writes, “The mostly Roman Catholic country began to allow divorce in 2004. Earlier this year, Congress recognized civil unions for gay couples and, recently, a pilot program in Santiago harvested the country’s first legal medical marijuana.”

President Bachelet is a doctor and happens to be the former head of U.N. Women. Their website says, “UN Women is the UN organization dedicated to gender equality and the empowerment of women.” They’re heavily funded by the United States among other countries and support abortion. It was no surprise to discover where some of the funding for Miles Chile was coming from.

The Center for Reproductive Rights (CRR) is obviously well known. They are currently fighting to allow abortions after 20 weeks in the U.S. and work to change abortion laws all over the world. Discover the Networks says CRR, “Seeks to guarantee abortion-on-demand as a basic, worldwide human right.” They add, “By extension, those opposing abortion-on-demand would be in violation of human rights legislation and liable for arrest and punishment at the hands of an international tribunal.” Some off CRR’s “major donors:”

The push for abortion in Chile makes sense to many people, in particular when it saves the life of the woman. But, is that really what they’re after? Clearly it’s not, it’s simply a stepping stone to “abortion on demand, no apologies, no restrictions.” It’s doubtful that anyone will blink an eye as it’s become the new normal. Here in the U.S., a recent poll shows that for the first time in seven years, more people are pro-abortion than not.

Years ago, I often argued that most pro-abortion people were under the impression there were strong time restrictions. My mother, a staunch supporter of abortion, was stunned when I opened the phone book back in 1993 and showed her several Yellow Pages ads for clinics that offered abortions in the SF Bay Area until 24 weeks. I was pleased to know that she at least objected to late-term abortions before she passed many years later.

Even among pro-lifers there’s a variety of beliefs of what’s right and wrong. Some believe there is no reason to kill an innocent baby, period. Some object to anything but therapeutic abortion and other who can’t fathom the thought of abortion after 20 weeks gestation. I had the unfortunate experience of finding out just how simple it is to abort a baby “anytime before you go into labor.”

In 2004, about midway through my seventh pregnancy my doctors discovered I was very sick with kidney disease. Because of the pregnancy, they wanted to wait to do a biopsy and find out exactly what we were dealing with. After my second week of being hospitalized (with two teenagers, two grade-schoolers, two toddlers and one VERY tired husband at home) one of the doctors suggested, quite abruptly, I might add, that I should abort for my own safety.

I asked my kidney doctor what he thought but he said it “probably wasn’t necessary.” The next day, the other doctor returned and asked if I’d made a decision. I told him there didn’t seem to be a reason since we really didn’t know what I had. He told me that didn’t matter since I also had panic disorder, didn’t I? That would “cover it” legally. He went on to say I could change my mind anytime until labor began. Less than a year later, I found out I was five months pregnant (after being told I would die from another pregnancy). Again, the offer came, “Anytime before you go into labor.”

In CRR’s current lead article called “A Dangerous Limit: Women need abortion options after 20 weeks. Here’s why,” Amy Hagstrom Miller says, “Some women don’t find out they are pregnant until much later than others. Some women need time to save money to end their pregnancy. Some women’s life circumstances change drastically during the course of their pregnancies. No matter the reason, women need access to safe, compassionate care.” Well, that covers just about everything.

We’re scolded for trying to be the World Police to the point our government won’t even help arm people against ISIS. Yet here’s a group out of America that’s making worldwide life and death changes that not everyone agrees with. They’re loud, they’re well-funded and they’re not going anywhere.

“Cursed be he that taketh reward to slay an innocent person. And all the people shall say, Amen.” ~Deuteronomy 27:25

Oregon PolitiChick Margie Mars is a Conservative-Libertarian, writer and parenting expert. Along with writing and designing graphics for PolitiChicks, she writes for several popular conservative and parenting websites such as Brenner Brief, Parenting, Examiner, Tavern Keepers, Parent Society, True Patriots For America and Attachment Parenting International. Margie writes as an expert on Attachment Parenting, pregnancy, childbirth, breastfeeding, child rearing and autism. Favorite political topics include the Tea Party, gun rights, the Constitution, Israel and border safety. In addition to writing she manages the social media accounts for two small businesses. Margie holds a degree in Early Childhood Education, certification in Special Needs Education and has taken courses in Legal Assisting and Political Science. In her spare time she enjoys reading political non-fiction and biographies, making jewelry, embroidery, painting and other crafts. Margie and her husband Rob have eight children (three on the autism spectrum); ages 9-27 (seven boys and one girl!) and three perfect grandchildren. You can follow Margie on Facebook: https://www.facebook.com/MargieWilsonMars8 or on Twitter at: @Margie10