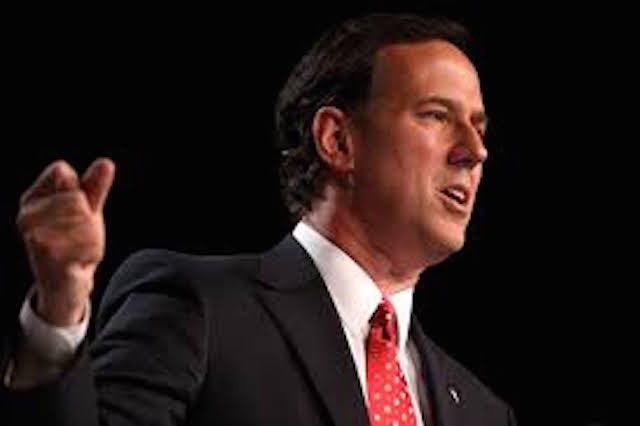 Rick Santorum kicked off the Western Conservative Summit in Denver, Colorado with Radio talk show host Steve Kelley introducing Santorum as a “man who doesn’t not walk away from his principle of faith, family and country.”

The controversial Supreme Court ruling on same-sex marriage is a point of issue that will dominate this weekend’s summit among the presidential candidates in attendance. Santorum denounced the decision to a crowd of 4,000 conservatives, “We have a Supreme Court that says the only reason that you could possibly oppose changing marriage laws in America is because you hate people who want to marry people of the same sex. That is not true,” Santorum said. “It’s a decision based on a lie, based on fundamental untruths.”

In his classic social conservative tone, Santorum argued that the breakdown of American families is the main reason for the hollowing out of the middle of America. He calls for Americans to find a leader of courage to fight and protect the traditional American family in order to have a vibrant economy. “I can outline plans for a new tax plan that would eliminate the IRS, a new trade package, immigration reform, manufacturing plans, but it wouldn’t do any good if we can’t protect stable American families of a man and a woman raising a child in a loving home. We don’t have leaders with the courage to get up and fight for the truth,” Santorum said.

Santorum argued it can’t be a done deal since this issue haven’t been fought due to politicians being ‘bullied into silence’:

“We are losing because we are not even trying to win, we are trying to not offend.”

On foreign issue, a platform issue Santorum is now heavily emphasizing on the campaign trail, Santorum stated the “next president needs to be prepared to be a wartime president.” Calling ISIS “radical Muslims,” Santorum stressed his national security credentials during his time as Senator, he wrote articles about the threats from nuclear Iran ten years ago.

“When talking about ISIS, I laid out a plan to defeat them. They know who I am, and I know who they are,” Santorum said, drawing loud applause.

Ban “Gone With The Wind”?! Is John Wayne Next?

Charleston: Start of a Race War or Spark For a Spiritual Revival?