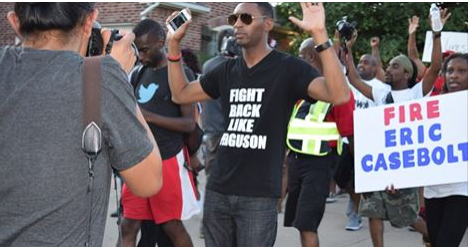 As many predicted, the power people behind Ferguson/Baltimore are now trying to take over McKinney, Texas regarding a pool party.

Before the entire world goes up in flames, we at PolitiChicks encourage everyone to read as much as possible about both sides of the story.  Of course the only people who really know what happened start to finish are the people who were actually there, but even then they all have their own versions.  This article is one of the most comprehensive we’ve seen:

Unfortunately it may already be too late as things are already escalating in McKinney.  Breitbart is reporting McKinney homes are being vandalized and locals are threatened.  From Breitbart:

According to residents, one home had a brick thrown through a window on Saturday night, and several mothers told Breitbart Texas they have received death threats via Twitter.

Several of the mothers say they have moved their children out of the neighborhood in fear of threatened violence.

One man said that his wife left their home, and he stayed in their residence to defend their property.

Over 500 people of mixed races, mostly black, protested at the Joyce Kelley Comstock Elementary School in McKinney. From there, they marched through the Craig Ranch community subdivision.

Though technically the demonstration on Monday night remained peaceful, this protest movement has been anything but peaceful.

The short end: the cop is likely a dummy and out of line, but there was no ‘brutality’ to be found. My only position on the issue, is that we should wait for the facts to come in before serving justice in the court of public opinion. If you look at the responses I’ve received on Twitter, you’d think my position to be similar to that of holocaust-denial.

Folks, this is not the 1960’s; we’re not in a world where people are segregated or have to ride at the back of anyone’s bus.  But we are in a world where people with money and power want disorder to take place; they are preying upon people, trying to victimize them, preaching and promoting nothing but hate.  They are opportunists who will use any and every opportunity–big or small–to divide and conquer.

We don’t live in a perfect world and it was never meant to be.  The people moving into McKinney, Texas (as we speak) are counting on the media and the uninformed to look at the pool party in a myopic way.  Please don’t.

UPDATE:  From Hannity last night, this is an interview with an eyewitness in McKinney: