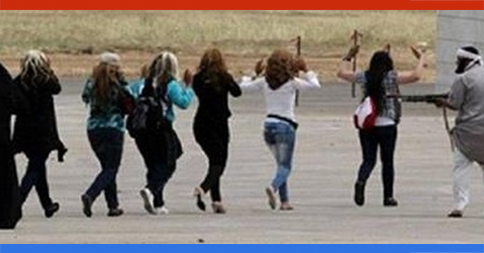 As the battle wends onward against the terrorist group ISIS, the enemy has chosen a new target on which to focus its hatred and backward ideology: Vocal women.

In many (though by no means all) parts of the Middle East, and especially the wide swaths of Iraq and Syria currently under the control of ISIS, women do not enjoy a comfortable life with Constitutional freedom, freedom of speech and equal rights. Adherents of the twisted, mutated version of Islam practiced by the region’s most fundamentalist zealots interpret the Koran in a strictly literal, viciously sexist way, a way that causes them to view females as little more than the property of men. Women in these areas may not leave their houses without the escort of their husband or a male family member, they may not show any part of their skin (including their faces and hands) for fear of tempting men to sinful lust, and they are expected to function as essentially domestic servants at home, cooking and cleaning while remaining always at their spouse’s beck and call for anything he may desire. They are forbidden to work, and thus to earn their own money, and would have little to contribute even if this were not the case: It is a key point of fundamentalist Islamic fervency that women not be permitted to obtain an education. Those of the female persuasion found to be violating these rules are subject to punishment and even death via an array of methods that are positively medieval in their barbarity: Flogging and stoning are not uncommon.

Coming from this mindset, it is perhaps not altogether surprising that ISIS has distributed a list of prominent, high-profile women who speak to change the status quo and empower their gender. Many of the women on this list, it is said, are Westerners, including many Americans who will fight for these freedoms with their voices, and to be silent is subjugated. These people are then targeted by terrorists the world over, both those loyal to ISIS and those merely sympathetic to the group, for attack.

But to disagree with the notion of women forging their own path and expressing their own opinions in society, while undeniably wrong-headed, is a different thing from reacting to it violently, and the decision of ISIS to actually target prominent women betrays something about their psyche. It appears that they are personally threatened by women who are not powerless and utterly dependent upon men, who are independent and make choices that are theirs alone. In the midst of what they view as a war against the “Great Satan” of the United States, ISIS considers women who are anything other than barefoot and pregnant as enough of an emergency to take time out for specialized hits.

Civilized society long ago (though sadly recently in the span of human history) came to the realization that welcoming women as equal partners in the building of a free nation is essential for the prosperity of everyone, regardless of their gender. An ideology so contrary to these basic values is a threat not only to our country, but to the progress of humanity itself. Women being targeted by ISIS for such “crimes” as speaking out against sexist social policies should be afforded personal protection, to ensure that those who seem to dwell but a step above the caves do not see their deluded visions made real.

Are States' Rights A Thing of the Past?

As Technology Moves Forward, So Must Our Security