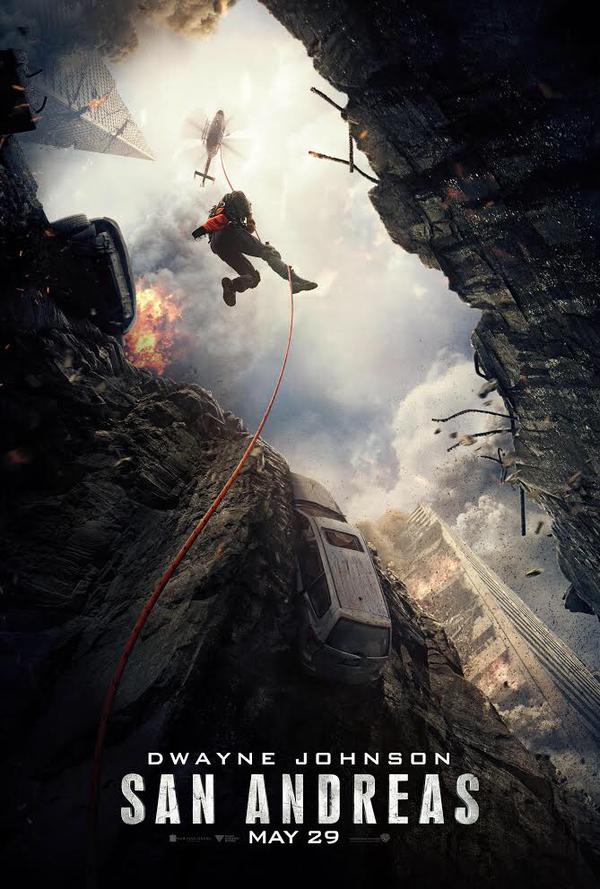 Hold onto your $20 movie theater popcorn tub and soda, “San Andreas” in 3D is what an action adventure movie should be. From beginning to end, it delivers exactly what any self respecting disaster movie should: a simple storyline surrounded by lots of totally awesome special effects. No flummoxing through some dragged out intertwining plot of unlikable characters (ala: 1970’s Irwin Allen films) till finally, near the end, some action happens. “San Andreas” delivers it’s thrills from the get go and the storyline is blended in between the action. Not only that, but the lead characters are likeable and NOT ONCE did I have to hear how all of this happened because we Americans did something wrong (other than the bad guy was of course a Wall Street type). In fact, in the typical disaster film ending dialogue of “We will rebuild”, the American flag stood tall and waved proudly (when was the last time you saw that?).

Directed by Brad Patton, “San Andreas” begins as Ray (Dwayne Johnson), a helicopter rescue pilot, saves a young girl from a literal cliff hanging auto accident. As Ray comes to terms with his impending divorce from his wife Emma (Carla Gugino), two Caltech seismologists predict an epic earthquake is about to happen in California. As their prediction comes true, Ray finds himself flying his helicopter to rescue his wife from on top of a skyscraper and soon thereafter Ray and his wife reunite to rescue their daughter from yet another massive quake.

Four out of five stars for a fun and thrilling Hollywood disaster film, without any lectures or “teachable moments” blaming global warming or endorsing a “going green” scheme. Being a resident of Los Angeles (and living within a few miles of the San Andreas fault), I did feel a bit “shaky” going to see the film, but definitely still well worth while. I have a feeling though, the rest of the country might sound a big round of applause when the Hollywood sign breaks apart and crumbles to the ground!

Americans Shift Left on Major Moral Issues—and the Why

Why Americans Are Struggling To Meet Their Healthcare Costs