Get ready because here’s the latest out of camp OccupyDemocrat.com, trying to justify and validate Hillary Clinton’s enormous speaking fees (up to $300,000 a pop). 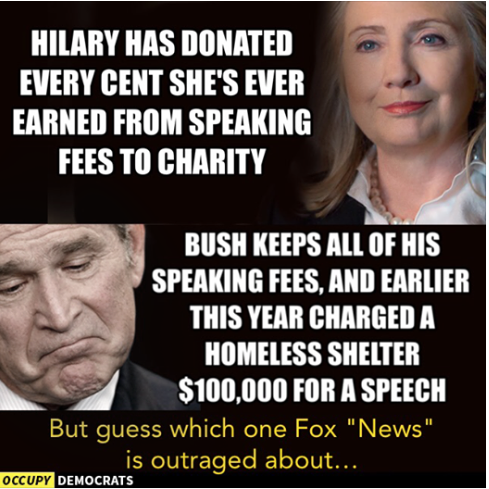 Many of you may have seen this meme (left) popping up on social media, created by OccupyDemocrats.com.

(First of all, Occupy Democrats, if you’re going to blindly support Hillary you might want to learn how to spell her name…but I digress…)

For the record, the Republican Party believes in capitalism so our side doesn’t have a problem with anyone making money. Whether you’re earning a living as a speaker or an author or a baker or a banker, we don’t care. If you’ve earned it and work for it, you have our blessing and we hope you make a boatload of money!

Of course the Democrat Party believes the opposite. Their philosophy is, “What’s yours is our, and what’s ours is ours, too.” So for Democrats seeing this meme, it would seem Hillary Clinton is the “better person” for allegedly donating her 6-figure speaking fees to charity while Pres. George W. Bush allegedly does not.

But what’s the “charity” she’s so generously giving to?

Her own. The Clinton Foundation. The same Clinton Foundation that takes donations (perhaps in exchange for nefarious favors) from some of the most anti-women, anti-gay countries on planet earth such as Saudi Arabia, Kuwait, Nigeria, and others.

But does Hillary donate “every cent” of her speaking fees to charity?

Probably not, but that depends on whether or not you trust what the Clintons themselves tell the media. The closest I came to validating Occupy’s claim was a Washington Post article, which said (emphasis mine):

“The Clintons also sometimes request that sponsors pay their fee as a donation to the Bill, Hillary and Chelsea Clinton Foundation…Hillary Clinton is doing this with her $225,000 fee for a speech this fall at the University of Nevada at Las Vegas, according to her office.”

Remember—Hillary’s office is merely repeating whatever Hillary Clinton wants the world to believe. Such as, “Hillary doesn’t want to carry more than one e-mail device,” or “Benghazi was caused by a video,” or “Oops, Hillary deleted all her e-mails…”

Can we trust anything the Clinton’s tell us, in this case that Hillary donates all her speaking fees to charity? Doubtful. After all, they were supposedly ‘dead broke’ when they left the White House. They were so broke, in fact, they had to “take” a few extra goodies from the White House to compensate their loss.  It’s unimaginable, in such a dire state of financial emergency, that Hillary would donate money to anyone other than herself and her family.  (Again, accumulating wealth is something Republicans have no problem with but it’s Democrats who continuously screech about the uber-wealthy and their supposed greed.)

But let’s just go with it and assume that Hillary is so wonderfully caring and generous that she donates “every penny” of her speaking fees to charity.

How does one donate the multi-millions worth of diva-like perks, including Gulfstream jets in which she insists on flying?

■ Round-trip transportation on a chartered private jet “e.g., a Gulfstream 450 or larger jet,” plus round-trip business class travel for two advance staffers who will arrive up to three days in advance.

■ Hotel accommodations selected by Clinton’s staff and including “a presidential suite for Secretary Clinton and up to three (3) adjoining or contiguous single rooms for her travel aides and up to two (2) additional single rooms for the advance staff.”

■ Meals and incidentals for Clinton, her travel aides and advance staff, as well as all phone charges.

■ Final approval of all moderators or introducers.

As a reminder, the meme created by OccupyDemocrat insinuates they hate this type of elitist 1% stuff but our side doesn’t.  Matter of fact, if anyone wants to fly The PolitiChicks (Morgan Brittany, Dr. Gina Loudon and me) millions of miles around the world in a 16-passenger Gulfstream G450 to speak 90 minutes and put us up in the best hotels ever invented, please send us a message at: [email protected].

Finally, perhaps the biggest question to ponder is this one:  If Hillary has been donating all her speaking fees to charity wouldn’t she have been blabbing about this from the start?  The Clintons are two of the world’s most media-savvy politicians.  So years ago when people were first complaining about her enormous speaking fees and list of demands, wouldn’t it have been prudent for her to say, “I’m giving all my fees to charity!”  If this were true, that’s exactly what she would have done.  That’s why I call b.s. on this entire story.

“Given their immense wealth and how they got it — politicized kickbacks from the most powerful political forces in Washington, on Wall Street and around the globe — the Clintons would do well to admit that they are unusually wealthy and stop trying to pass themselves off as ordinary folks.”

Yes, Al Jazeera, yes they should.

All that being said, here’s a new, more accurate meme to share on social media: 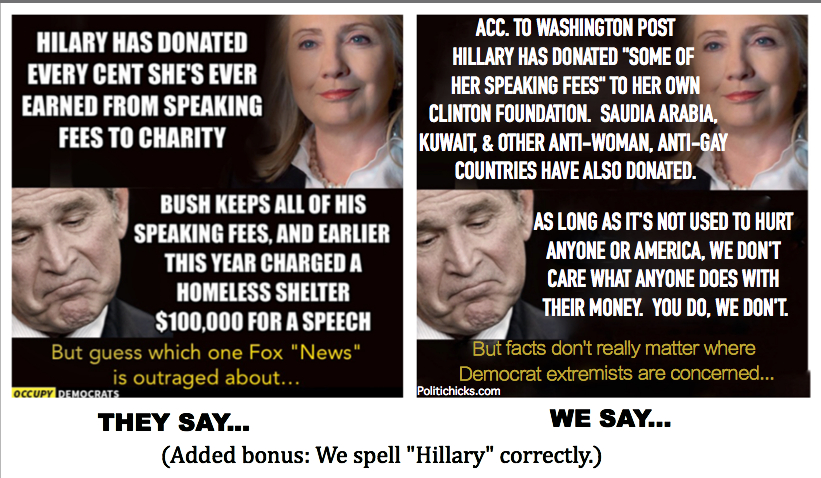 Obama’s Forced Diversity in Housing Is Not a New Development