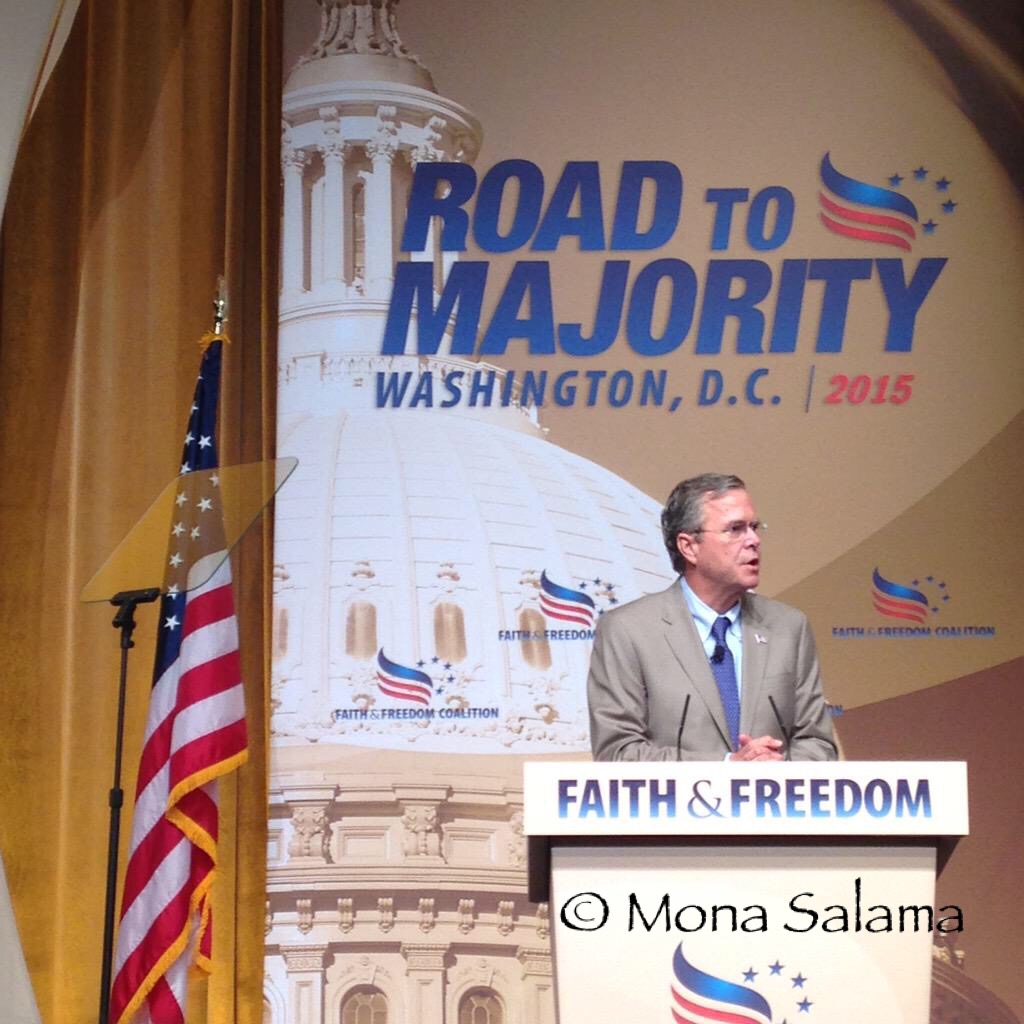 In his beginning remarks, presidential candidate Jeb Bush stated that his speech won’t “be political, instead it will be about my journey of faith” at the Road to Majority conference, sponsored by the Faith & Freedom Coalition in Washington D.C.

The former Governor began to discuss the recent South Carolina shooting of the nine worshippers killed inside a church in Charleston on Wednesday. Bush was scheduled to campaign in South Carolina on Thursday but cancelled due to the tragic event:

“This was an evil act of aggression, I don’t know what was going through the mind of the man who committed this atrocious crime, but I do know what was in the heart of the victims. They were there meeting in brotherhood and sisterhood in that church, engaged in prayer, learning the words of the lord.”

Bush then began to speak about his conversion to Catholicism on Easter 1995, after he lost his first 1994 governor election.

“I converted to the Catholic Church because I believe in the blessed sacraments.  Faith is really the moral foundation of our country,” Bush told a crowd of religious conservatives. However, as he talked about his faith, Bush began to tout his time as governor of Florida and how his “journey to faith informed him during his public service.” He mentioned how he narrowed the number of abortion clinics due to being “shocked at the poor regulation of Florida’s abortion clinic.”

On the issue of religious liberty, Bush called for the protection of religious freedom. “Religious freedom is under attack in ways that we have never seen before” Bush pointed out as he mentions the recent cases of religious organizations being mandated under the Obamacare to provide and cover birth control. “When it comes to doing the right thing, the Little Sisters of the Poor know more than the regulators.”

The former Governor mentioned the controversial case during his tenure of governor in Florida of Terri Schiavo. Bush reminded the audience of his role in the case of keeping Schiavo on life support, a rarity that Bush doesn’t bring up during his campaign trail. “I stood on the side of Terri Schiavo.”Bush added.

With the issue of same-sex marriage, an issue the Supreme Court will rule any day now over the constitutional right of same-sex marriage, Bush stated that the debate whether the ruling should continue on. “It’s got to be important over the long haul, irrespective of what the court says. Conscience should also be respected for people of faith who want to take a stand for traditional marriage.”

Bush added the importance of raising children under parents married as husband and wife. “We should recognize the power of a man and a woman loving their children as a good thing as a positive and helpful for those children to live a successful life.”

Bush concluded his speech thanking the group for their work to fight for freedom and faith adding, “I humbly ask for your vote.”

(VIDEO) One Distraction: I Still Think You're Beautiful