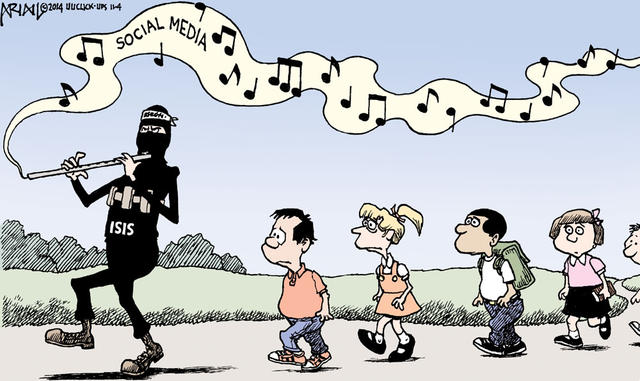 With the threat from the terrorist group known as the Islamic State in Iraq and Syria – variously known as ISIS, ISIL, or simply IS (Islamic State) – seeming to grow ever worse as time goes on, it’s tempting to think that the people who make up this radical organization are a malevolent foreign group. Surely it is exclusively the misguided youth of Middle Eastern countries gripped by religious extremism who would ever think to join a violent band like IS. It’s profoundly disturbing to realize that this understanding, which comes so naturally to Americans, is deeply misinformed.

The reality is that a shocking number of new IS recruits come from first-world countries that we would never imagine supporting such a group. They are young people hailing from European nations, from Australia, and sadly, even from the United States.

The reason IS can get these people is because it knows exactly what it is doing. It has a surprisingly and alarmingly sophisticated propaganda machine that plays the Internet like a violin, utilizing social media and Google image searches to serve recruitment ads to our youth. And these ads are competently prepared; they are “hip” and relevant. IS invokes popular video game series like Call of Duty and currently used slogans like YOLO (“You Only Live Once”, a widely circulated phrase among modern youth) in their propaganda pieces, deceiving young people into thinking the terrorists understand them and are the kind of folks they want to hang out with. American teenagers and young adults who are successfully seduced can then make contact with IS recruiters via online communications platforms, setting up plans to fly to a Middle Eastern country (usually Syria) and join with the group. There they become soldiers, training and fighting alongside IS – and sometimes, lending their youthful computer wizardry towards producing exactly the kinds of propaganda that won them over.

This is a serious problem that must be addressed now. It is no exaggeration to state that our youth are under attack by extremists from afar. And the most appalling thing of all is the fact that we have largely abandoned the defenses we have against this kind of encroachment. Child and teen involvement in scouts, church groups, and athletic activities all promote traditional American values and exposure to other healthy young people, keeping our kids grounded in reality. But increasingly, these kinds of pastimes are being seen as “old-fashioned” and boring by young people, who spend their time alone surfing the Internet and seeing whatever someone somewhere wants them to see – including IS propaganda.

We need to take this crisis seriously. Violent, dangerous people are drawing our own children away from us to die for their misguided extremism. Misguided children who’ve decided to follow the Pied Piper of Evil that is ISIS.

We have the power to end this – as parents we must simply decide to use it.