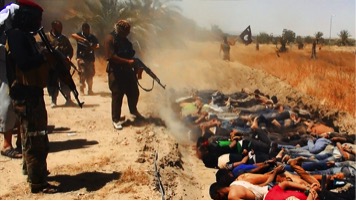 After President Obama was criticized last week for not having a “complete strategy” to defeat the brutal terror group ISIS (Islamic State), he has now approved sending up to 450 additional U.S. troops to Iraq primarily to equip and train more Iraqis. But is this really going to make a difference?

Especially since the U.S. has already spent $25 billion in aid, investing in training and equipping the Iraqi military, only to have those brave warriors run from ISIS militants like high school cheerleaders. Not to mention the fact that the extremists captured significant quantities of US-manufactured weapons (from Iraqis) and have used them on the battlefield. The definition of insanity is attempting the same strategy over and over again expecting a different result.

As FOX host Bill O’Reilley pointed out, “Sending a few hundred more folks into Iraq because you’re embarrassed, Mr. President, not a plan.”

Lt. Col. Ralph Peters (Ret.) added, “The president has decided to take advice from his civilian advisors with no military experience, rather than from serious military planners. You cannot possibly defeat the Islamic State with these airstrikes controlled by lawyers.”

It’s been a year since ISIS began raping and pillaging its way through Iraq’s Nineveh province, emptying the city of Mosul of its Christian population. Since then, ISIS has captured Fallujah and Ramadi, two other major cities U.S. troops fought and died to secure before Obama took office. The brutal regime has driven tens of thousands from Northern Iraq, kidnapped, tortured, and murdered thousands of Iraqi soldiers, raped hundreds of women and young girls, and committed countless beheadings, including that of Americans James Foley and Steven Sotloff.

There is estimated to be 31,000 militants on the fields of Iraq and Syria, doubling their number since last fall.

ISIS is much more than the “JV team” President Obama once described, and it’s not going away any time soon. It is an established army with thirty-five square miles of prime Middle East real estate, raking in nearly up to $3 million per day in revenue.

The ultimate long-term goal of ISIS is to expand its current state to the four corners of the earth, imposing Sharia law on all mankind and either slaughtering those who do not comply, or forcing them to live a humiliating second-class existence. Of course, it does indeed, have the United States in its sights. In fact, the group is already attempting to use Libya as its new ‘route to the West’.

According to FOX News:

“Islamic State terrorists are said to be using Libya ‎as an “entry point” into Europe, with intelligence sources on the ground in Africa telling Fox News at least 30 ISIS fighters who left from the country have been “picked up” by the Italians in recent weeks.

The purported terrorists all claimed refugee status but American ‎and European agents believe this is a clear indication that ISIS terrorists have come into Europe virtually untouched.”

“There is no way you can block it,” one told Fox News. “Libya is now an easy entry point into the E.U. and ultimately into the U.S. for ISIS. They are saying, this is the way to America.”

While White House officials may deny it, ISIS poses a real threat to U.S. soil.

“Extremists inspired by Osama bin Laden’s ideology consider themselves to be at war with the U.S.; they want to attack us. It is important to never forget that–no matter how long it has been since 9/11. ISIS is just the latest manifestation of bin Laden’s design. The group has grown faster than any terrorist group we can remember, and the threat it poses to us is as wide-ranging as any we have seen.”

According to Erick Stackelbeck, author of the book, ISIS Exposed,

“The FBI field agents have done some fantastic work since the 9/11 attacks, and the Bureau’s performance overall in breaking up terror plots and arresting aspiring terrorists—including some who had planned to join ISIS—should be commended. But…the FBI is not infallible.”

Stackelbeck has also said, “Although America’s Southern border is surely enticing, it isn’t the only means by which ISIS jihadists and their sympathizers can penetrate the U.S. and carry out attacks.”

We have already seen a beheading of an Oklahoma grandmother, New York police officers attacked in broad daylight with a hatchet, and other ISIS-inspired attackers show up at a Texas “free speech” event with the intent to kill the event organizers. These brutal savages are not just at our borders; they are already inside them.

ISIS now also claims that it could purchase a nuclear device from Pakistan and transport it to the United States through drug-smuggling channels.

According to International Business Times, “ISIS would transfer the nuclear weapon from Pakistan to Nigeria or Mexico, where it could be brought to South America and then up to the U.S.”

Not to mention reports that the terrorist group may attempt a Beslan-style massacre in the U.S. Recall that horrible opening school day in 2004, when Chechen Muslim terrorists attacked a school in Beslan, Russia, resulting in the slaughter of 338 people?

Of that number, 172 were children.

“More than 1,000 men, women and children, including babies, were penned in an unventilated gym and a cafeteria. As the days passed without food or water and inside temperatures rose to 115 degrees, survivors were eating flowers they’d brought for teachers and fighting for urine to drink out of their shoes in desperation. Women and some children were repeatedly and continuously raped.

Adult males and larger male students were used as ‘forced labor’ to help fortify the building, then shot to death. Bodies were thrown out of an upper-story window, down onto a courtyard. Attempts at negotiation by responders were used by the terrorists strictly as an opportunity to buy time to solidify their fortifications.”

Why would we even want to remember such horror? Because Lt. Col. Dave Grossman (US Army, Retired), and Todd Rassa (Sig Arms Academy) believe Beslan to be a dress rehearsal for what terrorists plan to do to us. In fact, Rassa claimed that floor plans for half a dozen schools in Virginia, Texas and New Jersey have been recovered from terrorist hands in Iraq.

While al Qaeda appears to be dissolving (only to strengthen ISIS) ISIS is believed to be continuing al Qaeda’s twenty-year plan to destroying the West.

“The plan had seven phases, culminating in “Definitive Victory” in the year 2020. Interestingly enough, the fifth phase of the plan, which al Qaeda projected would unfold between 2013 and 2016, was “to establish an Islamic state or caliphate.”

Last summer, ISIS did exactly that.

Stackelbeck also explains that we now appear to be moving into the six –and next to last— phase: “Total Confrontation,” in which “al-Qaeda anticipated an all-out war with the unbelievers between the years 2016 and 2020.

Are we ready for it?

Whether President Obama recognizes it or not, ISIS has declared war on the West. How this war will end depends largely on strong U.S. leadership. ISIS means business, and it certainly has not been shy about the hell it has in store for the U.S.

Hillary 3.0 Announcement in NYC: Long On Promise, Short on Detail

What Happens When You Turn Education Over to the Feds? Ask Oregon.