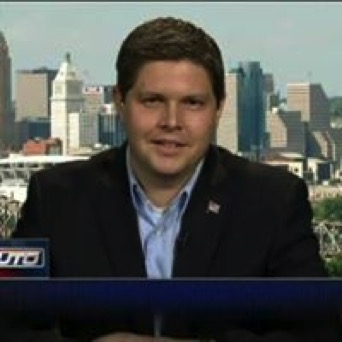 PolitiChicks:  Why are you running for Congress against a well-funded incumbent?

J.D. Winteregg:  Frankly, after a lot of reflection on the first run, I questioned whether or not I should just focus on the local level of politics. Then there were practical matters to consider. Unlike the Speaker, I am not independently wealthy; so, after the last election, I took a new job in order to keep a roof over my head and food on the table. (My wife Aimee, who’s not a big fan of poverty or politics, thanked me.) My plan was to continue to build solid relationships in the district, get more involved in local issues and establish a strong coalition of support in advance of a potential run for elective office down the road. I was also hoping that, when the GOP took the Senate, the Speaker would, (as he promised publicly) “fight tooth and nail” against Obama’s radical agenda. Then I watched him cave on “Cromnibus” and executive amnesty and, to add insult to injury, openly declare war on House colleagues who simply wanted him to listen to his constituents, defend the Constitution and put an end to ill-conceived and counterproductive Leftist policies.

With all due respect to Speaker Boehner’s past service, I know I would be accountable only to the people of Ohio 8, not the lobbyists, bundlers and consultants in DC. Being well-funded is not an indicator of doing what’s right; it’s an indicator of pandering to the right people with money. We need a “representative” who, once elected, will govern as he campaigned–despite the threats from wealthy power players on K street.  We need to elect someone whose words match his deeds. Ironically, if Speaker Boehner governed like he did when I was 8 years old, or actually followed through on his recent promises, I’d be holding a sign for him rather than challenging him in a primary. Unfortunately, his reality no longer matches his rhetoric…and that’s incredibly disappointing and incredibly frustrating.

PolitiChicks:  What do you feel are the most critical issues facing our nation at the moment?

J.D: Economic growth. National security. Amnesty. Obamacare. Radical Islam. Education. Veterans issues. The list is long. But when it comes right down to it, any critical issue our nation is facing today–from Common Core to immigration, ISIS to Obamatrade–is an “issue” because of one fundamental problem we have within our federal government–they have forgotten who they serve.

Those who “serve” in Congress are our employees, yet they work harder for themselves than they do for us. Their goal, especially after being in DC too long, is to preserve their positions of power by nurturing their relationships with wealthy donors and special interest groups. They’ve forgotten how to interact with the average American–Democrat, Republican, or Independent. Until we fire those in Congress who break promises and work only to preserve and grow their own individual wealth, the “issues” that need to be addressed will keep piling up. Then, inevitably, Washington will demand more money for “solutions” that are doomed to fail. The cycle must end.

That’s why the race with Speaker Boehner is so important. I believe, along with many others, that it’s the most significant “message” race in 2016! Once we remove the Speaker of the House–the de facto leader of the GOP “establishment”–and replace him with someone who is in touch with the people and who isn’t afraid to fight the progressive intrusion into the establishment on both sides of the aisle, we’ll empower the rest of the Americans who feel their voices are suppressed. Then, and only then, will we be able to return our government to its rightful owners, aka “We the People.”

I’m not running for Speaker of the House, but Speaker Boehner is my representative. I’ll be able to provide fighting support to those in Congress who are actually working for the people.

PolitiChicks:  What is the current mood of constituents in the district; do you find that many express discontent, apathy, or – what do you hear?

J.D:  First, people are disappointed. Many folks still like the Speaker personally, but they are horrified by his consistent acquiescence to the Far Left. I’ve heard this, (dozens of times on and offline), from several former Boehner supporters:  He used to be “one of us”, but after all these cave-ins to Obama, I’m afraid he’s now “one of them.” I like him, but I can’t bring myself to support him any more.

Another emotion I hear expressed in our district is fear. People fear what Speaker Boehner may do to them if they oppose him publicly. As one leads, others follow–and we see this at the local level in politics. What’s going on here is a microcosm of what we’re seeing at the federal level. In lieu of working for the interests of people, establishment Republicans are working for their cronies to preserve favored positions and to be able to suppress any dissenting voice. Where Speaker Boehner has offered swift punishment to those on his side who opposed his leadership, we’re witnessing the same thing in his district. People in the district want “change” that actually makes sense, but the climate of fear has been so cultivated that they need to know that there’s a much better, conservative alternative to Speaker Boehner. And, yes, I believe I’m that person.

Because he’s so well-funded, however, I need financial help to get my message and name out to people within the district and across the country. People can help me do this by going to http://jdwinteregg.com and donating. If everyone who has spoken negatively of Speaker Boehner contributed even $10 to my campaign, we would be able to let the people of OH-8 know they have a better alternative. And even if they can’t contribute right away, they sign up to volunteer and help on the ground or join our army of online ambassadors (aka #TeamJD). Every effort is appreciated. The people of OH-8 have been taken for granted for far too long. They need to be heard in DC…and I will be their voice.

PolitiChicks:  Why do you feel that you would be a better candidate than John Boehner?

J.D:  I can offer action because I don’t owe anyone anything. I’m uncorrupted by the DC establishment, and I am free to be the voice that Ohio 8 wants. I’m ready, willing and able to “fight tooth and nail” on behalf of my constituents. The Speaker talks a good game but he almost never follows through. I intend to back up my words with deeds. You might even say that, once elected, I’ll govern like he campaigns.

In addition, I can offer support to the good conservatives in Congress. I will work with them to end President Obama’s assault on the Constitution. I understand that the power of the purse rests in the House, and I will not vote to fund any of Obama’s unconstitutional initiatives. In fact, I will work to unite the Party–not attack the members within the party– to repeal any of these dangerous initiatives.

We need to reduce the size and scope of the federal government. Under the “leadership” of the Speaker, debt and regulatory burdens have increased dramatically. This is not all his fault, (Harry Reid, after all, was quite the “obstructionist.”), but he’s done very little to bring about any “change” that actually makes sense.  As a part of the generation that will be paying that bill and dealing with the burdens imposed by an ever-expanding federal bureaucracy, I understand the importance of getting our country back on a more  fiscally responsible track. I also understand that economic growth is critical to improving the lives of “the 100%”…and I will support positive, pro-growth initiatives that, if implemented, will give people a reason to start believing that the Republicans are not only different from, but better than, the Democrats.

We in Ohio-8 also need a champion in DC who understands education at the local level and how the federal government is impeding our local districts. Those in DC who have never had any kind of educational experience are holding our schools hostage with federal funding–districts are being forced to accept the well-known disaster known as the Common Core standards, which will ultimately lead to a nationalized curriculum (those who say otherwise do not understand how the public educational system works). Speaker Boehner led the way for this to happen by co-sponsoring No Child Left Behind–he has a vested interest in keeping the federal government in our schools. I will work to restore local control to our schools and keep the bureaucrats who know nothing about education out of this process. I’m especially suited to do this.

Finally, I understand the importance of our national security…and border security is an important piece of the puzzle. Having lived in a country (France) where unchecked immigration has crippled economic growth and enabled radical Islam, I understand the importance of protecting our borders. We need to ensure we’re not allowing people to illegally enter our country, drain our welfare system and put American lives at risk. Also, let’s face it–evil exists in this world. It’s not just about “children” and “dreamers.” Some folks hate and want to destroy us. We need to stop pandering and start making sure that we protect the health and safety of our children first. This is not “extreme”, “nativist” or “wacko”…it’s common sense.

PolitiChicks:  Please feel free to add anything else that you feel is important for the voters of the 8th Congressional District in Ohio? Website, social media, etc.?

J.D:  In part, this campaign is about a better choice for Ohio 8. The reality of the situation, however, is that many people outside of the district have a vested interest in preserving big government and the political status quo…and those people can essentially print money. I don’t need to match Speaker Boehner dollar for dollar, (see Brat vs. Cantor), but I do need donations, volunteers, online support and lots of earned media. I encourage your readers, (many of whom supported the recent “coup attempt” and added the #FireBoehner, #MakeDCListen and #NoAmnesty hash tags to their tweets), to visit http://jdwinteregg.com ASAP to donate, volunteer, sign up for updates and spread the word. This is not just about Ohio 8. On a national level, it’s about standing up for regular, hard-working taxpayers who aren’t part of the DC cocktail circuit. Together, we can send a message that entrenched and unaccountable politicians across the country won’t soon forget.