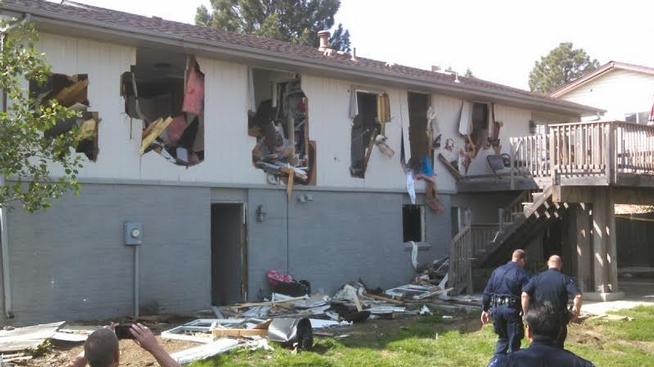 A WalMart shoplifter who barged into a home while fleeing from police on the afternoon of June 3rd, found himself outmanned and outgunned as Greenwood Village Police in Colorado destroyed the home to capture him.  The alleged perpetrator, Robert Jonathan Seacat, fired rounds at police officers during the 20 hour standoff.

Police used chemical agents, grenades, and a battering ram that left enormous holes throughout the structure, causing extensive damage. A neighbor also reported that police drove a tank through their fences.

Homeowner Leo Lech viewed the actions by police as paramilitary, suggesting what was done to his home appeared to cause more damage than that done to the compound of Osama Bin Laden. He described the use of force to arrest one gunman as an abomination and an atrocity.

“They methodically fired explosives into every room in this house in order to extract one person. Granted, he had a handgun, but against 100 officers? You know, the proper thing to do would be to evacuate these homes around here, ensure the safety of the homeowners around here, fire some tear gas through the windows. If that didn’t work, you have 50 SWAT officers with body armor break down the door.”

A nine-year-old boy inside the home during the invasion was talked out of the house at the beginning of the standoff by the police and his mother. He came out of the home unharmed. The mother is engaged to Lech’s son.

Lech’s son and fiancé rented the home. They did not carry renter’s insurance and have lost everything.

The Greenwood Village chief of police told the local news affiliate, “We did what we needed to do to protect human life.”