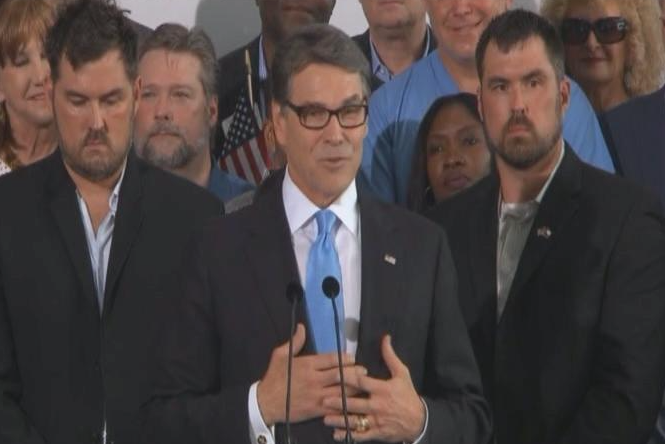 Announcing his candidacy in an airport hangar outside of Dallas, Perry told the crowd, which include many prominent military veterans joining him onstage, including American Sniper widow Taya Kyle and retired U.S. Navy SEAL Marcus and Morgan Luttrell, saying he is running because “it’s time for a reset, time to reset the relationship between government and citizen.”

Perry wasted no time criticizing President Obama failed administration reminding the crowd, “We made it through Jimmy Carter. We will make it through the Obama years.”

“We are just a few good decisions away from unleashing economic growth, and reviving the American dream,” Perry said, “and that is exactly why today I am running for the presidency of the United States of America.”

Perry sought to distinguish himself from the field casting himself as a leader who has done the work rather than one who talks about doing it. “Leadership is not a speech on the Senate floor. It’s not what you say. It’s what you have done. And we will not find the kind of leadership needed to revitalize the country by looking to the political class in Washington.” Touting his executive experience as a 14-year governor, Perry reminded of Texas economic prosperity of “lowering taxes, lessening regulation, stopping frivolous lawsuits – could be imported to Washington, It can be done because it has been done – in Texas” he said.

Perry made it clear during the announcement that the military will play a key part of his campaign. Highlighting his five years during the air force, Perry stated he is the only Republican hopefuls with military experience. Standing behind the Governor during his announcement was Marcus Luttrell, a retired Navy SEALs and author “Lone Survivor.” along with his twin brother Morgan. Liberal journalists ignorant of the two nations’ heroes called them bodyguards on twitter, showing the world that celebrities are praised more than our own heroes.

The sole survivor of the 2005 Taliban attack in Afghanistan, Luttrell met the former Governor where Perry took Luttrell in while he was dealing with PTSD.

“He is not just the lone survivor to Anita and me, he is a second son,” Perry said.

Perry’s camp released a video of the story of Marcus Luttrell and Rick Perry and the special bond between both. In the video, Luttrell speaks about the 2005 mission of becoming the only survivor and after how Perry’s family took him in. Luttrell called Perry “my best friend and my father figure, teaching me important values that I’ve learned after the military. I’ll owe you forever on that one I mean that’s why you’re the godfather of my kids, man.”

But Perry didn’t only spoke to the military crowd; he also made remarks to the millennial as well. “ I hear ya, Debt is not just a fiscal nightmare, it is a moral failure. Let me speak to the millennial generation: massive debt, passed on from our generation to yours, is a breaking of the social compact. You deserve better. I am going to offer a responsible plan to fix the entitlement system, and to stop this theft from your generation.”

During his first attempt in 2012, Perry was considered the front-runner, a threat to Mitt Romney. At that time, the field was small and less strong compared today. Perry was seen as the perfect candidate with his record of rapid job growth and creation during his long-serving governorship. During his stumbled times, Perry tried to defend his Texas program of offering in-state college tuition to illegal children. His debate performs of forgetting the third agencies he had planned to eliminate as president. But then, his opponents took advantage with the attacks and his candidacy was down the drain forcing Perry to drop out.

Fast-forward to three and a half years later, we now see a strong and healthy Rick Perry 2.0. He now begins his second campaign at the bottom with latest polls having him at 5%. To write off the former Governor with his record is a foolish thing to do. I hope the voters will remember his fourteen-year record, especially his last year as governor in 2014 where he told President Obama he would secure the border as well as Texas being the first state to deal with the Ebola crisis. If Americans can give a Junior senator a second chance as president, I hope Republican voters can give an experienced governor who has made Texas the top 12th largest economy with millions of jobs created during a time when America was losing jobs. His proven track record of Texas prosperity will intrigue voters as we are reminded of the suffering from the stagnant real incomes of the Obama era.

“Our best days are ahead of us, we are a just few good decision away and leadership change for the best days.” Perry said.