After the tragic murder of 9 South Carolina women and men who were attending church last week, Governor Nikki Haley had the U.S. and South Carolina State flags lowered to half-staff in their honor. The one flag on the capital grounds that remained at full staff was the Confederate flag. Anyone who knows the regulations for flying the U.S. flag in the United States would know that no other flag is permitted to be flown higher than Ole Glory, so why wasn’t the Confederate flag lowered?

The answer stems from a debate back in 2000 to remove the Confederate flag from atop the doom of the S.C. Capital. Legislative members argued that the flag was largely symbolic of a proud states history and deserved to be flown. Opponents argued that it was a painful reminder of a bitter dispute between brothers and held too many connections to that “peculiar institution” of slavery. The compromise was to move it from the Capital doom to the capital grounds beside the Confederate Soldiers Monument. 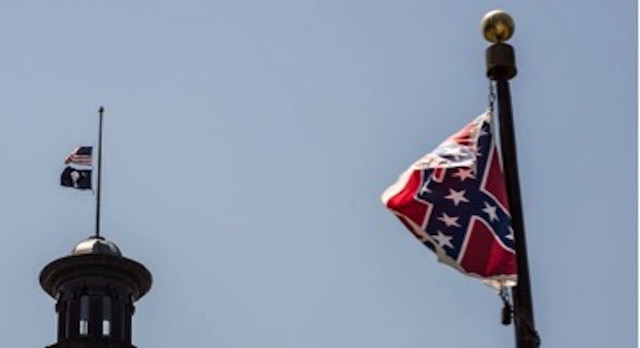 As can be seen in the picture (right), the flag is padlocked in place and can only be removed by an act of legislative order. It can be repaired but must be immediately returned to its raised position. So, this creates a dilemma whenever a situation arises that calls for the U.S. flag to be lowered to half-staff…the Confederate flag is then aloft and higher than our nations’ colors.

On Monday, Governor Nikki Haley spoke out about the flags storied history and called for the S.C. legislature to act. Her request was that the legislature move to have the flag taken down from the capital grounds. It is a call that has sparked wild debate across the Palmetto State with opinions differing in much the way they did before the start of the Civil War. Many argue it is a flag that recalls a bitter fight for states’ rights against a tyrannical and overbearing central government. Others say it is simply a reminder of a defeated army, a history of slavery, and is a stain on the memory of our great state.

It is interesting to note that there are no other examples of the flags of defeated armies flying over the victors capitals. We do not see a Nazi flag flying over Berlin, nor do we see the Japanese flag flying over China or the Philippines after the conclusion of WWII, and we do not find the French flag flying over London after the conclusion of the 100 years war. In all my travels across Europe, I visited German grave sites and allied grave sites, German memorials and allied memorials and not one Nazi flag was found. Maybe the time has come to bring down the Confederate flag and place it in a glass case where it can be viewed alongside the monument to those brave men who fought and died for a cause they held dear.

Place the flag beside the Confederate Soldiers Monument, in a case, but bring it down from that pole. Fly it at your home, on your car, or wear it on your clothing. No one says you cannot show pride in your states history but we should not allow such a divisive symbol to fly on public lands that are supposed to represent all South Carolinians. When over 80 percent of black South Carolinians do not want it flying on the capital grounds, it is time we listen to our brothers and sisters and bring the flags home if we want to fly them. God Bless my home state of South Carolina and God Bless America!

The Rise of Evil: Global Islamic Jihad on Israel and the West