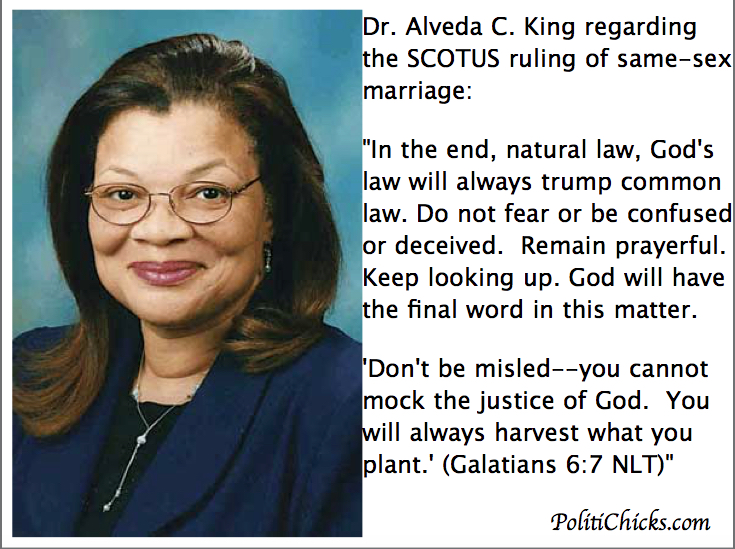 The Supreme Court of the United States of America in a 5-to-4 decision, has ruled that states cannot ban same-sex marriage.

One by one our Christian, Conservative, and principled leaders are voicing their opinion and convictions:

The Bible is not silent about such decisions. Alongside its clearest explanation of the sin of homosexual intercourse (Romans 1:24–27) stands the indictment of the approval and institutionalization of it. Though people know intuitively that homosexual acts (along with gossip, slander, insolence, haughtiness, boasting, faithlessness, heartlessness, ruthlessness) are sin, “they not only do them but give approval to those who practice them” (Romans 1:29–32). “I tell you even with tears, that many glory in their shame” (Philippians 3:18–19).

This is what the highest court in our land did today — knowing these deeds are wrong, “yet approving those who practice them.”

The Supreme Court has spoken and ruled from a position of common law — human law — that gay and lesbian couples have a fundamental right to marry. This is the highest rule that humans can make. Yet this is not the final word.

In the end, natural law, God’s law will always trump common law. Do not fear or be confused or deceived. Remain prayerful. Keep looking up. God will have the final word in this matter.

“Don’t be misled — you cannot mock the justice of God. You will always harvest what you plant.”(Galatians 6:7 NLT)

The Supreme Court of the United States has ruled today that same-sex marriage is legal in all 50 states. With all due respect to the court, it did not define marriage, and therefore is not entitled to re-define it.

Long before our government came into existence, marriage was created by the One who created man and woman—Almighty God—and His decisions are not subject to review or revision by any manmade court. God is clear about the definition of marriage in His Holy Word: “Therefore a man shall leave his father and his mother and hold fast to his wife, and they shall become one flesh” (Genesis 2:24).

I pray God will spare America from His judgment, though, by our actions as a nation, we give Him less and less reason to do so.

We already have equality in our Constitution. It’s already there. It’s in the Declaration. It’s already there in the way we are treated before the law. All the rest of this stuff is just the advancement of a leftist agenda disguised in terms designed to fool young people into thinking they’re supporting something that is earth-shattering and wonderful and legendary and so forth. They end up unwittingly brought along in plans and procedures that are designed to corrupt.

Judge Scalia writing in his dissent stated that the court had usurped the right of states and the citizens to decide the issue themselves. Scalia said “the decision eroded the nation’s very democracy”.

Today’s decree says that my Ruler, and the Ruler of 320 million Americans coast-to-coast, is a majority of the nine lawyers on the Supreme Court. The opinion in these cases is the furthest extension in fact—and the furthest extension one can even imagine—of the court’s claimed power to create ‘liberties’ that the Constitution and its amendments neglect to mention. This practice of constitutional revision by an unelected committee of nine, always accompanied (as it is today) by extravagant praise of liberty, robs the People of the most important liberty they asserted in the Revelation of 1776, the freedom to govern themselves.

After the Rainbow: Winning Back the Culture