What is Islam? The obvious dictionary definition answer is that it’s a religion, but legally speaking it actually enjoys all of the advantages of race, religion and culture with none of the disadvantages. 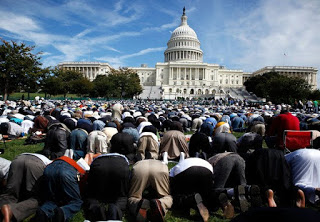 Islam is a religion when mandating that employers accommodate the hijab, but when it comes time to bring it into the schools, places that are legally hostile to religion, American students are taught about Islam, visit mosques and even wear burkas and recite Islamic prayers to learn about another culture. Criticism of Islam is denounced as racist even though the one thing that Islam clearly isn’t is a race.

Islamist organizations have figured out how lock in every advantage of race, religion and culture, while expeditiously shifting from one to the other to avoid any of the disadvantages.

The biggest form of Muslim privilege has been to racialize Islam. The racialization of Islam has locked in all the advantages of racial status for a group that has no common race, only a common ideology.

Islam is the only religion that cannot be criticized. No other religion has a term in wide use that treats criticism of it as bigotry. Islamophobia is a unique term because it equates dislike of a religion with racism. Its usage makes it impossible to criticize that religion without being accused of bigotry.

By equating religion with race, Islam is treated not as a particular set of beliefs expressed in behaviors both good and bad, but as an innate trait that like race cannot be criticized without attacking the existence of an entire people. The idea that Islamic violence stems from its beliefs is denounced as racist.

Muslims are treated as a racial collective rather than a group that shares a set of views about the world.

That has made it impossible for the left to deal with ex-Muslims like Ayaan Hirsi Ali or non-Muslims from Muslim families like Salman Rushdie. If Islam is more like skin color than an ideology, then ex-Muslims, like ex-Blacks, cannot and should not exist. Under such conditions, atheism is not a debate, but a hate crime. Challenging Islam does not question a creed; it attacks the existence of an entire people.

The racialization of Islam has turned blasphemy prosecutions into an act of tolerance while making a cartoon of a religious figure racist even when it is drawn by ex-Muslims like Bosch Fawstin. The New York Times will run photos of Chris Ofili’s “The Holy Virgin Mary” covered in dung and pornography, but refuses to run Mohammed cartoons because it deems one anti-religious and the other racist.

The equating of Islam with Arabs and Pakistanis has made it nearly impossible for the media to discuss violence against Christians in those parts of the world. The racialization of Islam has made Arab Christians, like Bangladeshi atheists, a contradiction in terms. The ethnic cleansing of the Yazidi could only be covered by giving them a clearly defined separate identity. Middle Eastern Christians are increasingly moving to avoid being categorized as Arabs because it is the only way to break through this wall of ignorance.

Islam is a theocracy. When it leaves the territories conquered by Islam, it seeks to replicate that theocracy through violence and by adapting the legal codes of the host society to suit its purposes.

Islamic blasphemy laws are duplicated using hate crime laws. Employers are obligated to make religious concessions to Muslim employees because of laws protecting religious practices, but many of these practices, such as refusing to carry out jobs involving pork, liquor or Seeing Eye dogs, are really ways of theocratically forcing behaviors that Islam forbids out of public life much as Saudi Arabia or Iran do. 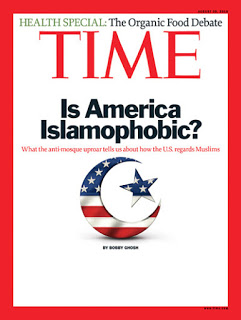 Accusations of bigotry are used to outlaw ideas that Islam finds blasphemous and religious protection laws are used to banish behaviors that it disapproves of. By switching from race to religion and back again, Islamists construct a virtual theocracy by exploiting laws designed to protect different types of groups.

Religions were not meant to be immunized from blasphemy because that is theocracy. Instead religions are protected from restrictions, rather than from criticism. Islam insists on being protected from both. It makes no concessions to the freedom of others while demanding maximum religious accommodation.

While race and religion are used to create negative spaces in which Islam cannot be challenged, the creed is promoted positively as a culture. Presenting Islam as a culture allows it easier entry into schools and cultural institutions. Islamic missionary activity uses the Western longing for oriental exotica that its political activists loudly decry to inject it into secular spaces that would ordinarily be hostile to organized religion.

Leftists prefer to see Islam as a culture rather than a religion. Their worldview is not open to Islam’s clumsy photocopy of the deity that they have already rejected in their own watered down versions of Christianity and Judaism. But they are constantly seeking an aimless and undefined spirituality in non-Western cultures that they imagine are free of the materialism and hypocrisy of Western culture.

Viewing Islam as a culture allows the left to project its own ideology on a blank slate. That is why liberals remain passionately convinced that Islam is a religion of social justice. Their Islam is a mirror that reflects back their own views and ideas at them. They pretend to respect Islam as a culture without bothering to do any more than learn a few words and names so that they can seem like world travelers.

By morphing into a culture, Islam sheds its content and becomes a style, a form of dress, a drape of cloth, a style of beard, a curvature of script and a whiff of spices. It avoids uncomfortable questions about what the Koran actually says and instead sells the religion as a meaningful lifestyle. This approach has always had a great deal of appeal for African-Americans who were cut off from their own heritage through Islamic slavery, but it also enjoys success with white upper class college students. 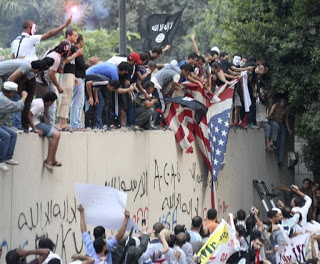 The parents of those students often learn too late that Islam is not just another interchangeable monotheistic religion, that its mosques are not places where earnest grad students lecture elderly congregants about social justice and that its laws are not reducible to the importance of being nice to others.

Like a magician using misdirection, these transformations from religion to race, from race to culture and from culture to religion, distract Americans from asking what Islam really believes. By combining race, religion and culture, it replicates the building blocks of its theocracy within our legal and social spaces.

Separately each of these has its advantages and disadvantages. By combining them, Islam gains the advantages of all three, and by moving from one to the other, it escapes all of the disadvantages. The task of its critics is to deracialize Islam, to reduce it to an ideology and to ask what it really believes.

Islam is a privileged religion. And there’s a word for that. Theocracy.

The Myth of Separation of Church and State