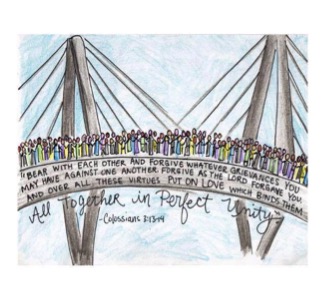 “And we know that God causes all things to work together for good to those who love God, to those who are called according to His purpose.” Romans 8:28

Just days before the horrible massacre at Emanuel A.M.E. Church in Charleston, South Carolina, the charming and historical city hosted a ‘call to prayer’ in which people from across the country were invited to pray and fast for America. After all, it doesn’t take much to see that the United States is in serious trouble these days: spiritually, morally, politically, racially, economically, and so on.

South Carolina Governor Nikki Haley invited people from all walks of life, all denominations, ethnicities, racial backgrounds, and languages to come to Charleston to pray and fast for our country on June 13th at the North Charleston Coliseum. The occasion provided everyone with opportunity to unite with others in worship, confession, repentance, and to refresh their hearts before God.

Only four days later, the “Holy City” of Charleston was rocked to its core when a 21-year old gunman (his name will not be mentioned here because this writer refuses to give him the infamy he so desired) fatally shot nine people in a predominantly black church on Calhoun Street, killing nine of its members, including the head pastor.

The suspect confessed to the killings, telling investigators that he wanted to start a race war. But guess what? His evil little plan completely backfired.

In fact, last Friday morning, the unthinkable happened. The families of the victims stood in an emotionally charged courtroom and told the cold-blooded murderer that they forgive him for what he had done. Let’s be honest–NO human being can do that without the supernatural help of God.

The 21-year old racist thought he was going to tear Charleston apart with his horrible acts of hatred and violence. Instead, the enchanting city, once at the very heart of slavery, fully united, overflowing with neighborly love and genuine concern for one another. Strangers hugged, grieved, sang hymns, and prayed together. It was a beautiful sight for our nation’s mourning eyes. The complete opposite from what we have been seeing lately in places like Ferguson and Baltimore. 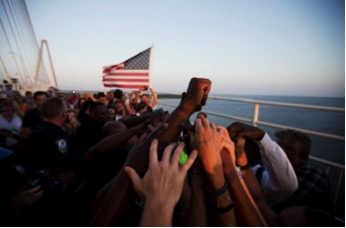 Sunday night, thousands of South Carolinians also came together to make a unity chain across the Arthur Ravenel Bridge, paying tribute to the nine fallen victims. Blacks, whites, all different ethnicities and denominations, held hands in unity and prayer across the magnificent bridge (if you have ever been to Charleston, you know exactly what I’m talking about). The unity chain was a ‘class act’ Southern-style. It was also the perfect example of that Shining City on a Hill many of us have been missing from our lives. 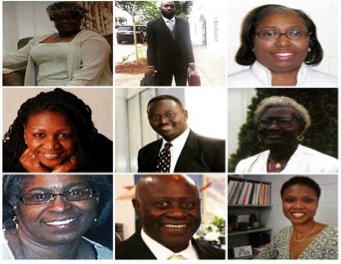 While they are no longer among us here on earth, God is still using these nine beautiful souls as examples for the rest of us.

A week later, fiery debates are already underway over new gun laws, flags, prescription medications, emotional disorders, and etc. While we can debate these issues civilly as Americans, let’s remember not to allow the killer to win by tearing us all apart.

Many of us are very passionate about the political issues surrounding the Charleston massacre (myself included). But we must not get distracted from the REAL culprit here, which is the EVIL that resides only in a human heart. No amount of legislation or other physical solution can fix something only God can fix by redemption through His Son, Jesus Christ.

I believe that the nine victims truly “got” it, and have been shining their Light toward each one of us since this horrible tragedy occurred. And while the killer intended to start a race war, I believe that God is using his evil to spark something good within our own hearts.

Same-Sex Ruling: Did “Love Win” or Did God Lose?