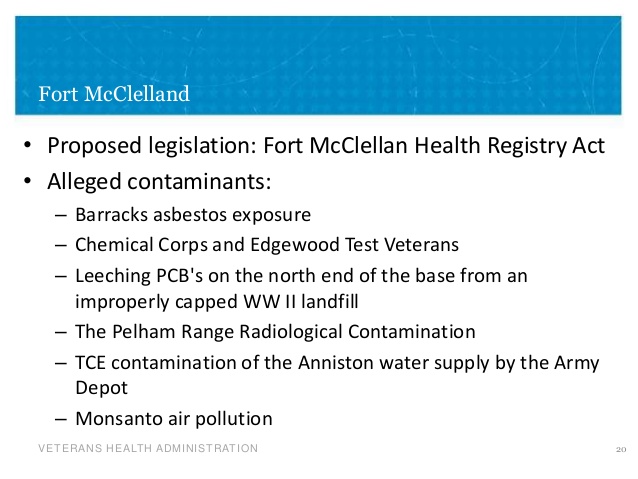 For months, PolitiChicks has been following the development of the Ft. McClellan Health Registry Act and the Department of Defense’s attempts at keeping the legislation from becoming law.

The legislation, introduced in the 115th Congress, is known as H.R.2622 and has been referred to the House Committee on Veterans’ Affairs.

The U.S. Department of Veterans Affairs recently updated their website explaining the potential exposure at Ft. McClellan, including fact sheets on an array of chemicals and environmental cleanup programs.

“Congressman Tonko reintroduced the Ft. McClellan Health Registry Act this week, and continues to urge McClellan vets to take advantage of the VA’s new website and to contact their local VA Environmental Health Coordinator for the most immediate and comprehensive attention to their service-connected health problems,” said Sean Magers, Communications Director for Rep. Tonko. “He looks forward to working together with veterans, their families, and the VA to ensure those who fought for our nation receive the care they deserve.”

Everyone is encouraged to call their Congressman and ask them to cosponsor H.R.2622.

Why Americans Are Struggling To Meet Their Healthcare Costs