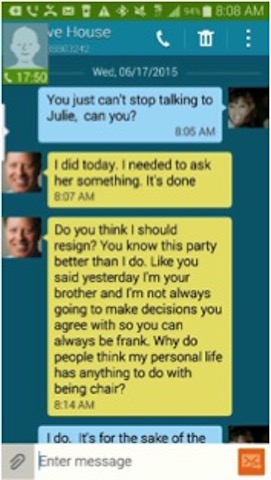 An incriminating text conversation just released shows what may be an admission of infidelity in the scandal plaguing the Colorado GOP. Republican activist Julie Naye alleged that she had an affair with the Colorado Republican Party Chair Steve House in an exclusive interview with PolitiChicks.

House claimed that he was being blackmailed with false allegations of an affair over a single staffing decision. For a detailed background of the scandal, click here.

Former state GOP secretary Lana Fore made public text messages in which she asked House, “You just can’t stop talking to Julie, can you?” House texted a reply with a confession that he spoke with Julie Naye, followed by a text asking Fore if he should resign.

The screenshot of the text has been verified with a firsthand examination of a longer text stream on Fore’s cell phone.

Meanwhile the phone audio of John Sampson—a private investigator and Vice Chair of the Adams County Republican Party—interrogating Naye was released to a Democratic leaning Web site. Naye alleged that she was instructed by House to deny the affair to Sampson. She said that House identified him as a “friend” so that a denial would be on record with a third party.

In the phone audio, Sampson methodically questioned Naye—who admitted to covering up the affair to Sampson before the audio was released.

It is unclear if the call was made on behalf of Sampson himself, House, or the Colorado GOP. Sampson repeatedly identified himself as the Adams County vice-chair and made what appeared to be a statement on behalf of the county party when discussing the Lincoln/Reagan Day Dinner. He expressed concerns about how the scandal would impact the county party’s ability to sell tickets to the $75/plate fundraiser, siting the Adams County connection with House. (The state chairman previously held the office of Adams County chair before leaving the county office prematurely for his unsuccessful gubernatorial run, dropping out before the primary.)

Adams County Chair Anil Matthai stated in a phone conversation that Sampson did not make the call representing the Adams County Republican Party.

Accusations are now being made that a Republican surrogate of House not only leaked the call to a left wing blog, but wrote the article as well. Ken Clark, formerly of KLZ radio, was the first to publicly question if someone associated with the state GOP chairman might be coordinating with a web site known to be run by Democrats for the purpose of attacking Republicans.

Almost immediately after the blog post with the audio was published, the Democratic Party of Colorado email blasted a fundraising letter.

Scott Walker “Testing the Waters” at Road to Majority Conference