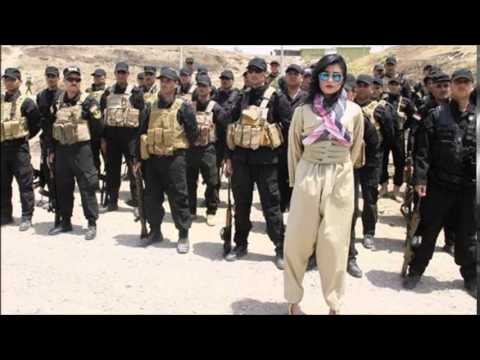 From Susan D. Harris at Freedomoutpost.com:

Kurdish pop-star Helly Luv, a woman who – despite numerous previous death threats for her song “Risk It All” – has pushed the envelope even further with the release of her new hit, “Revolution.”
The entire video for “Revolution” was filmed less than two miles from the frontline where Peshmerga fighters were battling ISIS. The video ends as nearby gunfire causes Luv to duck.

While much is being written about Luv, the Peshmerga fighters, and the Kurds – I would like to focus on why Luv’s video is so important.

First, it shines a glaring light on the fact that no singers or other celebrities in the United States have the guts to stand up and speak against the Islamic terror threat…using their talents as musicians, entertainers, or actors as a springboard to do something useful. Instead, we get people like Prince singing about “Baltimore” and headlines declaring that “Ferguson came to the Grammies.”

The American tempest continues to be stirred from within, distracting and disabling us. It reminds me of the now politically incorrect children’s book, “Little Black Sambo.” It tells the story of an Indian boy who throws his clothes and belongings to four hungry tigers. The tigers wear the fine clothes; each is vainer than the other, and they end up chasing each other around a tree until they melt into butter. Sambo scooped up the butter and took it to Black Mumbo to make pancakes. The story tells us:

“And she fried them in the melted butter which the tigers had made, and (the pancakes) were just as yellow and brown as the little tigers.”

Scandals being created, fomented, and exploited in America are whipping us into butter, and the Islamists are waiting for the right time to come scoop up what’s left of us.

(EXCLUSIVE) Under the Covers With the Colorado GOP: “Other Woman” Tells All

The Rise of Evil: Global Islamic Jihad on Israel and the West