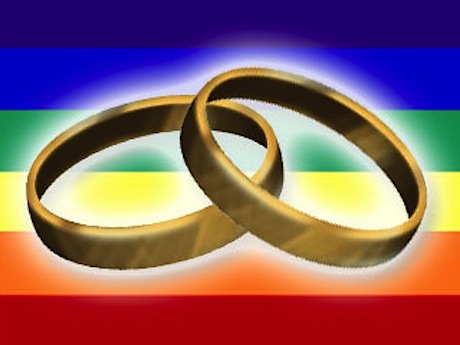 In a landmark opinion, a divided Supreme Court ruled that same-sex couples have a fundamental right to marry, thus legalizing such unions nationwide, establishing a historic victory for gay rights advocates.

It was another 5-4 ruling, Justice Anthony Kennedy wrote for the majority, which it’s not a surprise since he wrote every decision of gay rights. The four conservative justices wrote their own dissent. The Supreme Court’s decision declares that all states must recognize same-sex marriages under the 14th Amendment’s equal protection clause and established once and for all that marriage is a fundamental right of all citizens.

Justice Antonin Scalia, in his strongly worded dissent, blasted the majority as a “threat to American democracy.” Chief Justice John Roberts wrote that the decision had “nothing to do with the Constitution.”

The idea that the Supreme Court should rule same-sex marriage as a constitutional right is simply a way of saying the 10th Amendment doesn’t matter, the nationwide debate is over, and it’s time to steal this decision from the states. It’s a huge loss for federalism, as it takes away states right to decide how to handle powers reserved to them. And what’s worse is that an unelected group of five out of nine has decided to legislate over an issue by taking away the states freedom to govern themselves. Public opinion rapidly shifted a decision for five people to decide for everyone.  This is judicial activism at its very worst.

Before the ruling, 11 states legalized same sex unions on some form or another either by popular vote or by a legislator. 14 states banned gay marriage. The people in the remainder had not taken up the issue.  With this ruling, those citizens had their right of self-determination was taken from them, and those that chose not to legalize had their choice – and their votes – overruled.   If a state refuses to grant marriage licenses between same-sex couples, the couple can now seek an order from the federal judge requiring the state to comply with the ruling or risk being in contempt.

This is not government by the consent of the government.

This is why we have politics in a democratic society, where we choose elected officials to have these types of debates. Or, we exercise our fundamental right to vote. For the courts to short-circuit the political debate and decide is the wrong way to go about it. Permitting unelected judges to rewrite the laws of marriage will now pave the way for additional court battle in terms of alleged discrimination. Religious institutions that refuse to provide services will be labeled as a bigot and be subject into intense scrutiny and ridicule, especially from the political left. They will be punished for their personal and closely held religious beliefs about marriage if they choose to exercise the freedom t o simply believe that they choose. Pressures on businesses that are already feeling compel them to contract when they re not willing to do so, will double.  And the left will not be satisfied until they force their own views  – with the government’s help – down every person in America’s throat.

The best solution for Republicans is to pass laws protecting an individual’s religious liberty to protect one’s faith or else face new battles in which an activist Supreme Court will take away a person’s freedom to believe.  Laws that should go without saying if not for the left’s tactics of pressure, ridicule and hate.

The issue of same sex marriage has become a hot topic where 61% of Americans, according a Washington Post poll, support same-sex marriage. On the other hand, Opposition for same-sex marriage remains strong among religious and conservatives. And while it may matter little now thanks to an activist Court’s power grab, this issue will become a political “third rail” for conservative candidates as they court voters , especially in early contested states of Iowa and South Carolina.

But now the fight is considered over, will it be a relief for the Republican hopefuls to not bring this as a main issue plaguing 2016?  Or will it be a rallying call to get social conservatives to the polls?

Republican hopefuls speak about the ruling of the Supreme Court, all disagreeing the ruling but each giving different response.

Former Gov. Jeb Bush: “Guided by my faith, I believe in traditional marriage.  I believe the Supreme Court should have allowed the states to make this decision…It is now crucial that as a country we protect religious freedom and the right of conscience and also not discriminate.”

We must not submit our constitutional freedoms, and the promise of our nation, to judicial tyranny http://t.co/ZInyN6JfLR #SCOTUS — Ted Cruz (@tedcruz) June 26, 2015

While I disagree with this decision, we live in a republic and must abide by the law.

Former Texas Gov. Rick Perry responded to promising to appoint more conservative justices to the bench if he was president.

I’m a firm believer in traditional marriage, and I also believe the 10th Amendment leaves it to each state to decide this issue. #SCOTUS — Rick Perry (@GovernorPerry) June 26, 2015

Wisconsin Gov. Scott Walker, who is expected to announce his candidacy for the GOP nomination in mid-July, is the only one of the crowded field to call for a constitutional amendment to reverse the Supreme Court’s ruling. Walker called the ruling a “grave mistake” and said that the “power to redefine marriage should rest with the states.”

I believe SCOTUS’ decision is a grave mistake. 5 unelected judges have taken it upon themselves to redefine the institution of marriage.-SKW

I stand on principle, regardless of the polls. Always have, always will: http://t.co/ofvv2LHV93 https://t.co/7NNsPmeO2z

Ben Carson struck a different tone “While I strongly disagree with the Supreme Court’s decision, their ruling is now the law of the land.  I call on Congress to make sure deeply held religious views are respected and protected.  The government must never force Christians to violate their religious beliefs. I support same sex civil unions but to me, and millions like me, marriage is a religious service not a government form.”

Carly Fiorina in a statement called the court decision as “redefine marriage” that should have stayed among the states.

Today, 5 unelected judges redefined the foundational unit of society. Now it is the people’s turn to speak #Marriage

Donald Trump tweeted his reaction to the ruling, taking a jab at Jeb Bush in the process.

Sen. Rand Paul, former Governor George Pataki, Governor Chris Christie has yet to make a comment on this decision

So excited that #LoveWon—had to take part in the celebration! #SCOTUS #marriageequality pic.twitter.com/gZ3MrhYdx1

For too long our justice system has marginalized the gay community. I’m very glad the Court has finally caught up. pic.twitter.com/aeNG8UOszt