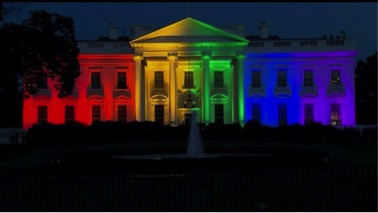 Many of us are deeply disappointed after last week’s Supreme Court’s complete disregard for the ‘rule of law’ in its decision to legalize gay marriage nationwide. In reality, the ruling has little to do with our gay friends, but rather, the heavy implications for Bible-believing Christians. We’ve already seen what happened to the Oregon bakers who refused to bake a cake for a gay couple’s wedding. They were completely destroyed and forced out of business. Sadly, that may be the very beginning for Christians and Biblical-based institutions now as religious liberty hangs in the balance.

Aside all of the ugly court battles we foresee in the near future, as Christians, we must learn from this painful defeat so that we can win back hearts to our Biblical cause. If you are like me, you may feel a great deal of frustration toward our own friends who have fallen under the hypnotic spell of the rainbow flag. However, it is easy for any of us to be duped if we don’t study God’s word as well as our enemy’s crafty tactics.

I know as I also used to support ‘gay rights’ myself until I discovered the brilliant schemes gay fascists have used to steamroll their perverse agenda into the hearts of so many Americans. Now, it is time for us to take their ‘gay rights’ marketing manual, turn it upside-down, and use it to our advantage (in a godly way, of course).

Marshall Kirk and Hunter Madsen were the masterminds who wrote the ‘gay rights’ public relations Bible, After the Ball (in 1989) to push the homosexual agenda throughout the past two decades. Their book would be the juggernaut to change America’s perception toward homosexuality, getting us to the proud rainbow-waving, “love wins” place we are today.

However, if we take a page out of Kirk and Madsen’s social marketing masterpiece, we can actually start reclaiming the hearts and minds of our fellow Americans.

Homosexual activists relabeled their movement “gay rights” to mask the controversial sexual behavior involved. They also accentuate the identity of being “happy” by using the term “gay” in their clever packaging. Not to mention the fact that it describes the battle that homosexuals have been denied basic freedoms the rest of us have enjoyed.

Guess what? Christians can now apply the same strategy as well, legitimately. Our first objective is refocusing our movement as “Right of Conscience” as opposed to anti-gay. Instead of sounding like we are judgmental Christians who are always against homosexuals, we want to magnify the wholesomeness of —our conscience. It is imperative that we accentuate our identity with this God-given light, our inner compass, which discerns between good and evil, and right and wrong, now more than ever.

“Right of Conscience” also implies that we are being denied a basic right, which we are now at risk of being denied our fundamental right to religious expression. By using the term “Right of Conscience,” we are persuading others to adopt this terminology so that we can now frame the terms of the debate (because whoever frames the terms of the debate almost always wins the battle—a strategy in which the Republican party fails miserably in most presidential elections).

To be savvy, it’s best if we don’t even get into conversations about homosexuality for the time being. We’ve momentarily lost that debate and can get back to it later. Instead, we work on getting ourselves in every door by being the kind, empathetic, loving, Christians that we truly are. With all the darkness happening in the world today, people are desperately longing for light. Shine your light and shine it in a compassionate way. Right now, Bible-believing Christians have a stigma of being haters and bigots (when in reality, most of us are much more tolerant than the Leftist militants). So, we must work even harder to dispel that myth by going out of our way to serve others and demonstrating genuine kindness. Once we are accepted and have gained trust, we will once again, have the opportunity to share the Truth more openly. Trust me, the whole homosexual “love wins” mantra will eventually get old and stale. In the meantime, we must have patience with our friends who have gotten caught up in all the hoopla.

Kirk and Madsen ordered their activists to inundate the public in a ‘continuous gay-related advertising, presenting in the least offensive fashion possible.’ As they described, “If straights can’t shut off the shower, they may at least eventually get used to being wet.” The main strategy for them was to talk about ‘gayness’ until the issue becomes thoroughly tiresome. They add, “If you can get straights to think homosexuality is just another thing—meriting no more than a shrug of the shoulders—then your battle for legal and social rights is eventually won.”

I think the best way to apply “Right of Conscience” to Kirk and Madsen’s desensitization mandate is to intentionally exercise our conscience in our own lives so others can see it in action. In other words, set a good example. Set higher standards for ourselves as Bible-believing Christians, and with the help of Jesus, do our best to live up to them. Give the Left less of a reason to call us “hypocrites”. Most of all, with humility, admit that we are struggling sinners just like everybody else.

Just as Kirk and Madsen flooded the media, radio, and television with “gayness,” we want to allow our light to shine into every aspect of our own lives until it becomes contagious. As I’m learning, it does no good to browbeat people. Instead, lead by example. Just like the community of Charleston, we can also illuminate the world with our light, presenting ourselves as a class act.

Kirk and Madsen used a term called “jamming” which is basically psychological terrorism meant to silence expression or even support for dissenting opinion. Calling dissenters of their homosexual agenda “haters,” or “bigots,” and “homophobes,” and linking homosexual dissention to Nazi atrocities. Their objective has been to isolate and shame their target so that the American public doesn’t want to be associated with them. They have been extremely successful I might add.

It’s especially disheartening to see so many of our own Christian friends joining the ranks of the rainbow flag. While we would expect this from unbelievers, it’s astounding to hear Christ followers regurgitating the same psychological babble as gay activists. They just don’t understand our enemy’s war plan, so they cave under pressure. Before we lose patience with them, we must understand that it’s oftentimes, a form of Stockholm syndrome. You see, it’s much easier to join the rainbow army today, than it is to be under psychological assault that comes with defending Truth. It’s their survival mechanism.

But as Ephesians 6:16 tells us, “Take up the shield of faith, with which you can extinguish all the flaming arrows of the evil one.” Keep the faith. Being persecuted these days for our Biblical beliefs is actually a badge of honor. The Bible even warns us that this would happen in Christ’s name. Persecution provides us this opportunity for purification, which prepares us for greater things ahead. I’m trying to learn how to rejoice and be glad in all of it. Pray for our Christian friends who are also in captivity.

In Conversion, Kirk and Madsen ordered their activists to mimic the process of stereo-type learning, taking American’s old-fashioned good feelings about good-guys and attach them to the label “gay,” either weakening or replacing our bad feelings toward the label and prior stereotype. In conversion, the target is shown his peers actually glorifying gays as if they are heroes (Bruce Jenner’s “courage” award is a great example of this). Just like the night of the Supreme Court decision, we saw the White House and Facebook lit up in rainbow fashion. Many of our friends joined the celebration. “If we can’t lick ‘them, might as well join them,” right? That was all done by design, and most people didn’t even realize it. That was the final step of Kirk and Madsen’s conversion. Those brilliant marketers have finally succeeded in changing the hearts of most Americans.

The only thing left now is punishment and criminalization of anyone who isn’t under the spell.

But do you know who really lost here? Our gay brothers and sisters. Now that we are completely denying the problem, we have robbed them of a chance to find real healing. That’s exactly what America has done by buying into the “gay rights” movement. We have betrayed our homosexual friends.

Glorifying dysfunction, we now have robbed our homosexual brothers and sisters of their own conscience, something they desperately need, and we all need, if we are ever going to find wholeness. Every time I see the rainbow flag on my social media feed, I can’t help but to think, “that is another light that is being extinguished.”

That’s why we must continue to take the most loving stance for our gay community, not as enablers of self-destructive and immoral impulses, but continue to stand in patient, but firm opposition. As angry as we may feel by the persecution we ourselves endure, we must resist our own temptation to hate now more than ever. It’s our Right of Conscience after all.

Whether we like it or not, this is the era of the rainbow. But we must remember that the rainbow actually belongs to our beloved Creator. So, if we are going to help Him win back our culture, we can do so by igniting one light at a time.

And gay activists are certainly right about one thing: Love does win!