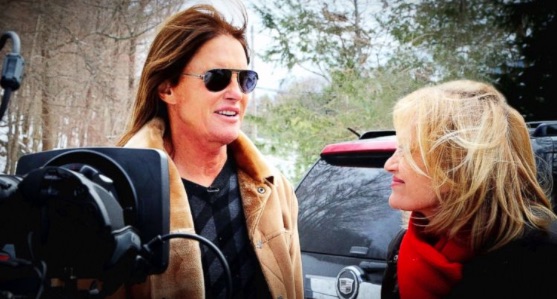 In the almost forty years that have passed since his glory days Jenner has been successful with motivational speaking, then became a reality star as the husband of Kris Jenner, matriarch of the infamous Kardashian clan. Over the past several years there has been a gradual–then drastic–change to Jenner’s face and overall appearance, beaming more and more feminine. Public speculation was abuzz with transgender talk and it turns out the rumors were true.

Several weeks ago seventeen million people tuned in to hear the much anticipated 20/20 interview with the former Olympian turned reality star to hear what he had to say about his personal life.  More specifically he was there to address his lifelong decision to physically transform his body from male to female. Bruce Jenner wants to live the rest of his life as a woman to match the identity that his soul feels comfortable with.

The main topic of his interview was his sexuality, but the 2-hour production revealed as much about Mr. Jenner as it did his 69-year old interviewer Diane Sawyer, former anchor of ABC World news and Good Morning America. Throughout the interview Ms. Sawyer was polite as she carefully questioned Jenner, who was obviously in the emotional state of his life. Even though he is an ex-husband of three women, the father of six children, step father to four children and grandfather to four, Jenner considers he is really a woman and has been for most, if not all, of his life.

In advance of his interview I began researching about transgender people.  Transgender was previously referred to as transsexual, still the preferred term by the pioneer herself, Rene Richards, formerly known as Dr. Richard Raskind. It was very interesting to read the wake of Renee’s life as she fulfilled her dream but left her loved ones to grieve their loss of Richard.

Considering the nature of the Mr. Jenner’s interview (a prelude to his reality series that will document his transition), one can imagine there were some extremely privy questions being asked with some very atypical answers being given. It is a very odd occurrence in human life to be discussing surgical operation that physically alters a person’s genitals, even in the 21st century. It is far from everyday conversation to discuss an entire lifetime up through middle-age as a man and then prepare to spend the rest of your living days as a woman. With no judgement involved, this is still a very fluky situation for any man or woman to be in.

Yet none of this daunted Ms. Sawyer as she remained composed with her language and reflected only empathy and understanding. Her concern for Mr. Jenner was quite evident throughout the interview. Really, she could not have been any nicer–until a certain time near the end of her interview when she unwisely brought up the subject of politics. With only fifteen minutes left, Diane Sawyer revealed that she did not do her journalist homework.   Whether unwilling on her part or not, Sawyer revealed the deep spaces of her own character in front of millions of viewers.

The problem occurred when Ms. Sawyer incorrectly assumed Bruce Jenner was a liberal. She was wrong.

“Bruce Jenner finally revealed he identifies as a woman in his 20/20 interview — but that didn’t shock anyone. What did was an announcement most viewers weren’t prepared for: He’s a Republican. “I’ve always been on the more conservative side,” the Olympic champion told Diane Sawyer while giving President Obama credit for being the first president to use the word “transgender” in the State of the Union address. A shocked Sawyer asked if he was a Republican, and Jenner fessed up to siding with the right. His political bombshell became one of the most controversial comments from his landmark interview, drawing derision and confusion online even as celebs on social media overwhelmingly supported his gender identity.”

The fact that Mr. Jenner proudly showed Ms. Sawyer his new black cocktail dress did not faze her. The many years of hormones to transition from male to female did not cause her to skip a beat. The talk of breast implants and genital surgery did not make her cringe…but a Republican??  She was visually and audibly instantly sick to her stomach. It is a good thing they did not talk politics until the very end or she would not have been able to continue the interview. A Republican?  Egad!

But since Sawyer brought up transgender people and politics, here are the facts. LGBT people are few in number but quite vocal as they insist for special legislation. Every law that is put in place takes away a piece of freedom, whatever that law may be. It is inappropriate and frankly, un-American to create law of the land of about 245 million people that pertains to so very few, especially when they already live under the same Constitution as the rest of us. It is simply ludacris and an enormous waste of time energy and money to pander to any group that is claiming they need legislators to protect them because of their sexuality.

“So the gay lobby — the militant, the political, extreme gay lobby — is very, very, extremely powerful in Hollywood.  It’s why I’ve also made mention of the fact that I vastly overestimated the percentage of the population of this country that’s gay.  I said yesterday it was 5% or 6%, and it turns out that it’s barely 2%.  This is Gallup, by the way.  Furthermore, there’s this: “According to a recent Gallup survey, of the total U.S. adult population (approximately 243 million US adults), less than 1%, only .8% (approximately 2 million US adults), are part of a same-sex couple.”

And since they are bringing up sexuality do not think this is a simple subject to the LGBT people. They have decided there are many labels from which to pick and simply “homosexual” or “heterosexual” is far too simple. You can be Agender, Genderless, Neutrois, Androgyne, Bigender, Cissexual, Cisgender, Genderqueer, Pan Gender, Queer Heterosexually ( I thought we were not allowed to say ‘queer’ but someone did not tell Wikipedia),Third gender, Third Sex, Trans man Trans woman, Tri gender and Two spirit. I think that covers most of them.

Bruce Jenner, Diane Sawyer and others might be interested to know that there are around 243 million Americans in this country and for most of them the sexuality is a private topic. Conservatives readily understand that there are small factions of people across our country that disagree with mainstream America in social, fiscal, and foreign matters alike. We also understand that life is not fair or equal as individuals strive for their own piece of the American dream. But the Constitution has in place a fine structure that has so far worked very well with only a few amendments that were definitely needed.

Real discrimination was removed with the abolition of slavery. The Gay Lobby likes to consider they are a minority group that is treated discriminatorily but this is just not true. The sexuality of people is an intimate subject not a minority group in need of new laws.

What the LGTB people need to take to heart is their sexuality comes back to the tried and true conservative notion that more often than not, less is indeed always more regarding personal matters. It would be prudent for LGTB citizens to grasp that if they did not make a public issue out of a private struggle (we all have them) no one else would either. Some mistakenly believe that a public media onslaught of public shaming will force all to agree on any one social issue, like the call from the loud left that human rights are being crushed in the gay population. This is not true. Gay people already have equal rights, but they want more. Sexuality is private, not basis for special interest groups to gain new sex-based legislation.

Every American is this country has equal rights in the eyes of the law but states can’t be completely equal in terms of resources and location because populations are not equal in size or in the demographic ideology of the people who live there. People themselves are not equal by way of physical attributes, intelligence, education, drive and talent. Just as no two fingerprints are the same, neither are two people exactly equal and alike. This is called an individual and conservatives embrace individuality, but it is most certainly ever equitable. Nothing is.

As any Kardashian or Jenner himself would say, at the end of the day Bruce Jenner will be just fine–but perhaps that can’t be said about Diane Sawyer. She is not a good example of a woman who is growing old with grace. Because as much as I like Bruce Jenner, and I do, to imagine that from all of the knowledge that he revealed to Ms. Sawyer in their carefully executed exchange…the only thing that made her gasp was that Bruce Jenner–soon to be a woman–is a Republican.

What I took away from the Jenner interview is that Diane Sawyer is perhaps the epitome of the dumb blond and she makes me want to run to the salon and dye my hair brown.  But at least we no longer have to wonder which way she votes.

Dan Joseph (VIDEO): "Back in the White House"