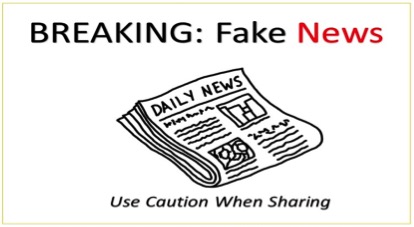 Okay, we’ve all fallen for them:  headlines that seem too outrageous to believe yet after reading a few paragraphs we share them anyway.  Almost every time, these stories are proven false and we quickly delete them from our social media pages.

Each week, PolitiChicks.com will share the ‘Top Bogus Stories of the Week’ in hopes that we’ll spare everyone a little embarrassment.

OK, this is the top bogus story of the week and it comes from a satire news site called DuhProgressive. Unfortunately, many on the right are simply too eager to believe that Melissa Harris-Perry would say something as ignorant as the story claims. Allegedly, in the fictional story, Harris-Perry is interviewing Juan Williams of Fox News and formerly of NPR, when she claims that the three black officers arrested in connection with the death of Freddie Gray are actually not black and must have white ancestors. The satirical story goes on to have Harris-Perry claim they are “White African Americans” and after Williams objects vehemently to such a claim, Perry then says he is also a White African American.

Sadly, this story has been shared by thousands who read the title and determined it was likely true without bothering to read the story or source its origin. If they had done either the results would likely have been their realization that it was satire and not true. Sharing the story is not really problematic as long as you include in your heading, “This is Satire” so folks know it’s not real…although, it should be obvious when you read it that it is not real. The first clue was the missing link to the video of the interview.

Upon reading this bogus story it was disappointing when the several admirals turned into ONE admiral who retired in 1987. Admittedly, Admiral James Lyons is a man of honor and was certainly at the top of his game during his time in uniform. However, RedFlagNews and the original source of this story, The Last Great Stand, both fail to provide any credible evidence that Admiral Lyons ever accused Obama of treason. The video clip included does not provide him making such a claim or even suggesting such a crime. (However, I would argue there is certainly grounds)

The source of the story gives a series of hyperlinks that show where these “admirals” have made such comments about Obama but it turns out that every link is from the original source itself and refers to the same Admiral. There were a few Generals listed who criticized Obama but again, no examples of their having called him a traitor have come to light. Even the active duty general the source include, Gen. Kelly, was only speaking to Congress about potential threats along our borders.

Ironically, the article claims that over 300 high ranking officers have been fired for either speaking out against Obama or objecting to his policies. Yet, not one of these individuals has come forward as a citizen to protest their firing or to further criticize Obama. Now, if you were willing to risk your career to call out the Commander in Chief, it stands to reason you would be even more willing to shout your displeasure in his leadership once you have been fired. The title of this article is not only misleading it is an outright fallacy and does great harm to the conservative cause by providing evidence to the left that we on the right will believe anything.

(Please note this is in NO way an attempt to defend Obama or his policies, it is simply to demonstrate that we cannot accept stories as valid just because they fit our worldview and go along with what we already believe to be true.)

Book Review, The Divided Era: How We Got Here & the Keys to America’s Reconciliation