When you hear stories about students being told they cannot fly the American flag you expect these to come from states where conservatives are in the minority. You do not expect these types of incidents to occur in the Deep South, where patriotism is as common as sweet tea and pickup trucks. However, a senior at York Comprehensive High School, in York, SC, was told on Wednesday, May 13th that he would need to remove the US flag from his truck.

Initially, Peyton Robinson was told his flag was reported by some as being “offensive” but later in the day administrators told the 18 year old senior that it was a safety violation. Peyton came out to his truck at the end of the school day to find that an administrator had gone to his vehicle and removed the bolts that held the flag safely in place, and placed the flag on the bed of his truck.

In response to the schools position, students rallied around Peyton that evening and vowed to drive to school on Thursday with their flags flying on their own cars. Several local news programs have been on scene and the support for the flag and Peyton Robinson has been overwhelming. 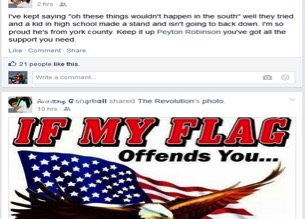 Friends of Peyton’s have taken to Facebook and other social media outlets to voice their support of his Flag flying truck. To the left is a screen shot from one such page.

One thing is certain, the Principal of York Comprehensive High School and the other administrators are facing fierce and overwhelming opposition to the schools decision. At the moment of this story, there are hundreds of vehicles driving by the school with flags attached to their cars and trucks. I am from York, SC and my family members tell me that there are schools all across the county and state rallying to Peyton’s and the Flags defense. God Bless America!

UPDATE: The York High School Administration has kicked media off of the school grounds. A group of Veterans have started to gather outside the school and say they will remain as long as needed.

Second UPDATE: After serious back lash from the community the school has made an exception to the flag policy that will allow the U.S Flag to be flown. This according to a call from Mr. Black and official with York Comprehensive High School.

Top Bogus Stories of the Week