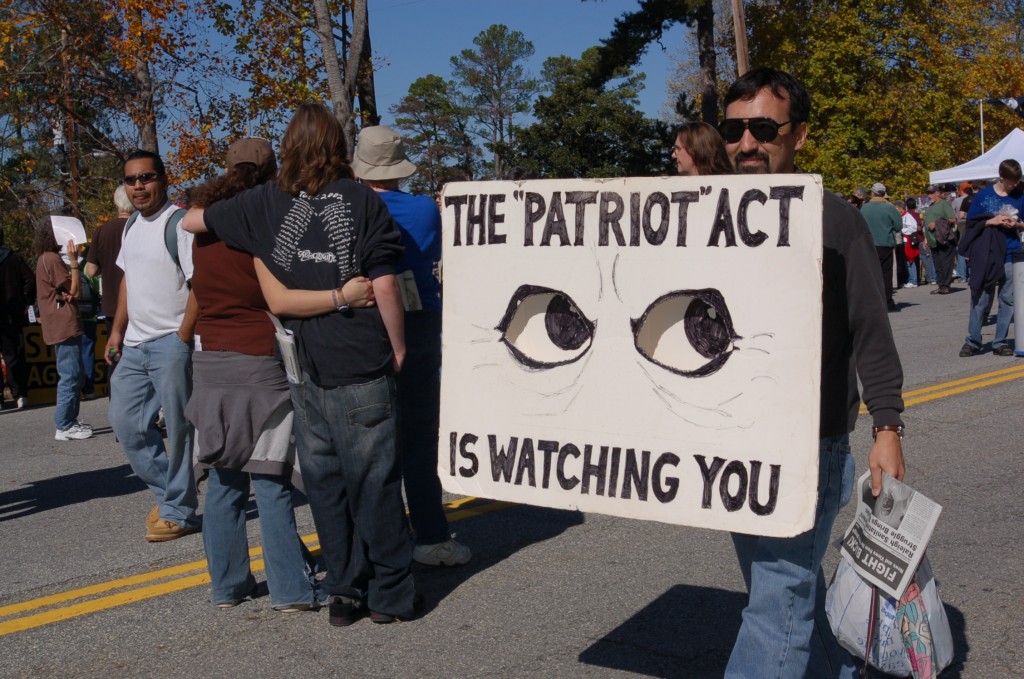 The Uniting and Strengthening America by Providing Appropriate Tools Required to Intercept and Obstruct Terrorism Act of 2001 (USA PATRIOT Act) was passed in reaction to the terrorist attacks in America on 9/11/2001.  It was not until 2013, with the leaks to the media by Edward Snowden, that the general populace became aware of the massive amounts of metadata being collected by the National Security Agency on each and every one of us under Section 215 of the PATRIOT Act.  The Fourth Amendment to the U. S. Constitution states:

The right of the people to be secure in their persons, houses, papers, and effects, against unreasonable searches and seizures, shall not be violated, and no warrants shall issue, but upon probable cause, supported by oath or affirmation, and particularly describing the place to be searched, and the persons or things to be seized.

The National Security Agency, through the complicit Foreign Intelligence Surveillance Court (FISA), issued warrants that were too broad and are a clear violation of our rights under the Fourth Amendment. In addition, these broad warrants produced so much data it rendered it essentially useless. A recent report from Michael Horowitz, Inspector General of the Department of Justice states, “The agents we interviewed did not identify any major case developments that resulted from use of the records obtained in response to Section 215 orders.” The PATRIOT Act gave the government too much power and should not be renewed as written.

The USA Freedom Act (H.R. 2048)  passed the House by a 338-88 vote this month.  It restricts the bulk collection of these massive amounts of calling records (metadata) under Section 215 of the Patriot Act.  It limits collection to instances where there is “reasonable, articulable suspicion.” The government must use a specific selection term, which represents an “individual, account, or personal device.”  This should end the bulk collection of our phone records and is a move in the right direction to targeting a specific person and communication device; someone deemed to be a person of suspicion with intent to commit acts of terrorism.  The House bill also requires the Foreign Intelligence Surveillance (FISA) Court to have more transparency, and puts much needed restrictions on the activities of the NSA.

The primary duty of our federal government is to protect its citizens.  The threats from radical Islam, as well as others intent on committing acts of terrorism, are real.  The USA Freedom Act is not perfect, but it is a step in the right direction.  It scales back the powers given to the federal government through the USA PATRIOT Act, protecting our liberty and privacy rights while allowing for specific targeting of true threats to our homeland.

Fall of Rome: A Mini-lesson in History